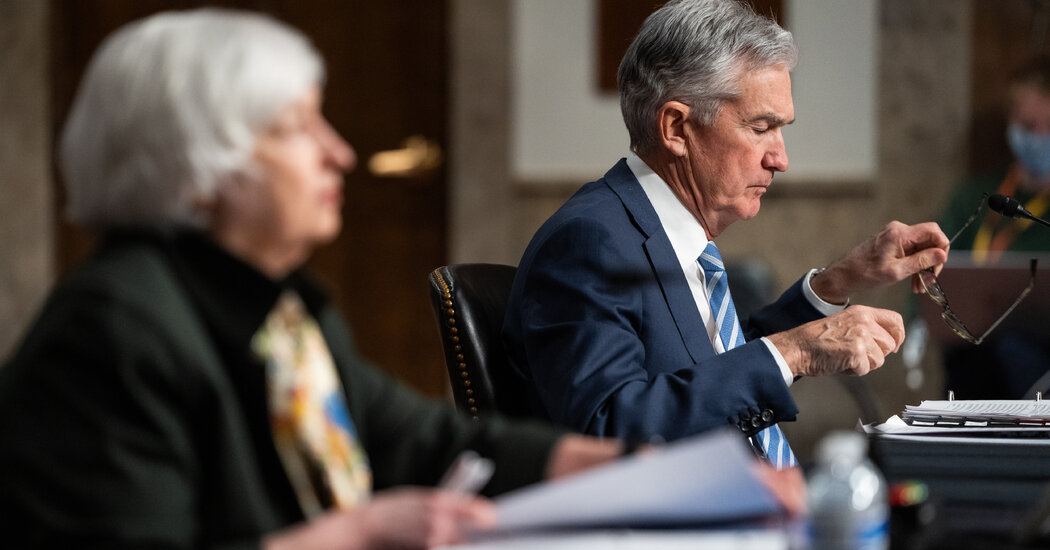 
The Omicron variant of the coronavirus comes at a challenging moment for the Federal Reserve, as officials try to pivot from containing the pandemic’s economic fallout toward addressing worryingly persistent inflation.

The central bank has spent the past two years trying to support a still-incomplete labor market recovery, keeping interest rates at rock bottom and buying trillions of dollars’ worth of government-backed bonds since March 2020. But now that inflation has shot higher, and as price gains increasingly threaten to remain too quick for comfort, its policymakers are having to balance their efforts to support the economy with the need to keep price trends from leaping out of control.

That newfound focus on inflation may limit the central bank’s ability to cushion any blow Omicron might deal to America’s growth and the labor market. And in an unexpected twist, the new variant could even speed up the Fed’s withdrawal of economic support if it intensifies the factors that are causing inflation to run at its fastest pace in 31 years.

“In every one of the previous waves of the virus, the Fed was able to react by effectively focusing on downside risks to growth, and trying to mitigate them,” said Aneta Markowska, chief financial economist at Jefferies. “They’re no longer able to do that, because of inflation.”

The Fed’s attention to price increases, even as a threat to growth looms, is a turning point.

Inflation, and especially measures of it that strip out volatile food and fuel, had been slow for years. The Fed has two goals, achieving maximum employment and containing price increases, and quiescent inflation meant it could focus on supporting growth and bolstering the labor market — as it did during the earlier stages of the pandemic. But the sharp rise in prices this year has put the Fed’s two goals in tension as it sets policy.

The Omicron variant is in its infancy, and what it will mean for public health and the economy is unclear. But if it does shut down factories and other businesses and keep workers at home, it could keep supply chains out of whack, spelling more trouble for the Fed.

There is a risk that Omicron “will continue that excess demand in the areas that don’t have capacity and will stall the recovery in the areas where we actually have the capacity,” John C. Williams, the president of the Federal Reserve Bank of New York, said in an interview last week.

The Status of U.S. Jobs

The pandemic continues to impact the U.S. economy in a multitude of ways. One key factor to keep an eye on is the job market and how it changes as the economic recovery moves forward.

Janet L. Yellen, the Treasury secretary and a former Fed chair, made similar remarks at an event on Thursday.

“The pandemic could be with us for quite some time and, hopefully, not completely stifling economic activity but affecting our behavior in ways that contribute to inflation,” she said of the new variant.

“Generally, the higher prices we’re seeing are related to the supply-and-demand imbalances that can be traced directly back to the pandemic and the reopening of the economy, but it’s also the case that price increases have spread much more broadly in the recent few months,” Mr. Powell said during congressional testimony last week. “I think the risk of higher inflation has increased.”

Fed officials initially expected a 2021 price pop to fade quickly as supply chains unsnarled and factories worked through backlogs. Instead, inflation has been climbing at its fastest pace in more than three decades, and fresh data set for release on Friday are expected to show that the ascent continued as a broad swath of products — like streaming services, rental housing and food — had higher prices.

Given that, Mr. Powell and his colleagues have pivoted to inflation-fighting mode, trying to ensure that they are poised to respond decisively should price pressures persist.

Mr. Powell said last week that officials would discuss speeding up their plans to taper off their bond-buying program — prompting many economists to expect them to announce a plan after their December meeting that would allow them to stop buying bonds by mid-March 2022. The Fed announced early in November that it would slow purchases from $120 billion a month, making the possible acceleration a notable change.

Ending bond-buying early would put officials in a position to raise their policy interest rate, which is their more traditional and more powerful tool.

A faster taper “could set the stage for a rate hike at the March 15-16 meeting, although this may be too early from a labor market perspective even if the pace of improvement does remain rapid,” Jan Hatzius, chief economist at Goldman Sachs, wrote in a research note on Monday. Because his team thinks March would be premature, they expect an initial rate increase in June, though they say May is “very possible.”

Bond purchases help to juice markets and keep money flowing to borrowers, so slowing them makes for less additional support each month. A higher Fed interest rate would matter even more, denting asset prices and making many types of borrowing more expensive, like car loans, mortgages and business credit. By raising borrowing costs, the Fed could cool demand, allowing supplies to catch up and lowering prices over time.

Raising rates earlier would be a trade-off. Unemployment has fallen swiftly, dropping to 4.2 percent in November, but nearly four million people are still missing from the labor market compared to just before the pandemic began. Some have most likely retired, but surveys and anecdotes suggest that many are lingering on the sidelines because they lack adequate child care or are afraid of contracting or passing along the coronavirus.

If the Fed begins to remove its support for the economy, slowing business expansion and hiring, the labor market could rebound more slowly and haltingly when and if those factors fade.

But the balancing act is different than it has been in previous business cycles. The factors keeping employees on the sidelines right now are mostly unrelated to labor demand, the side of the equation that the Fed can influence. Employers appear desperate to hire, and job openings have shot up. People are leaving their jobs at historically high rates, such a trend that job-quitting TikTok videos have become a cultural phenomenon.

In fact, the at-least-temporarily-tight labor market is one reason inflation might last. As they compete for workers and as employees demand more pay to keep up with ballooning consumption costs, companies are raising wages rapidly. The Employment Cost Index, which the Fed watches closely because it is less affected by many of the pandemic-tied problems that have muddied other wage gauges, rose sharply in its latest reading — catching policymakers’ attention.

If companies continue to increase pay, they may raise prices to cover their costs. That could keep inflation high, and anecdotal signs that such a trend is developing have already cropped up in the Fed’s survey of regional business contacts, called the Beige Book.

“Several contacts mentioned that labor costs were already being passed along to consumers with little resistance, while others said plans were underway to do so,” the Federal Reserve Bank of Atlanta reported in the latest edition, released last week.

Still, some believe that inflation will fade headed into 2022 as the world adjusts to changing shopping patterns or as holiday demand that has run up against constrained supply fades. That could leave the Fed with room to be patient on rate increases, even if it has positioned itself to be nimble.

Lifting rates “before those people come back is a little bit like throwing in the towel,” said Ms. Markowska. “I have a hard time believing that the Fed would throw in the towel that easily.”