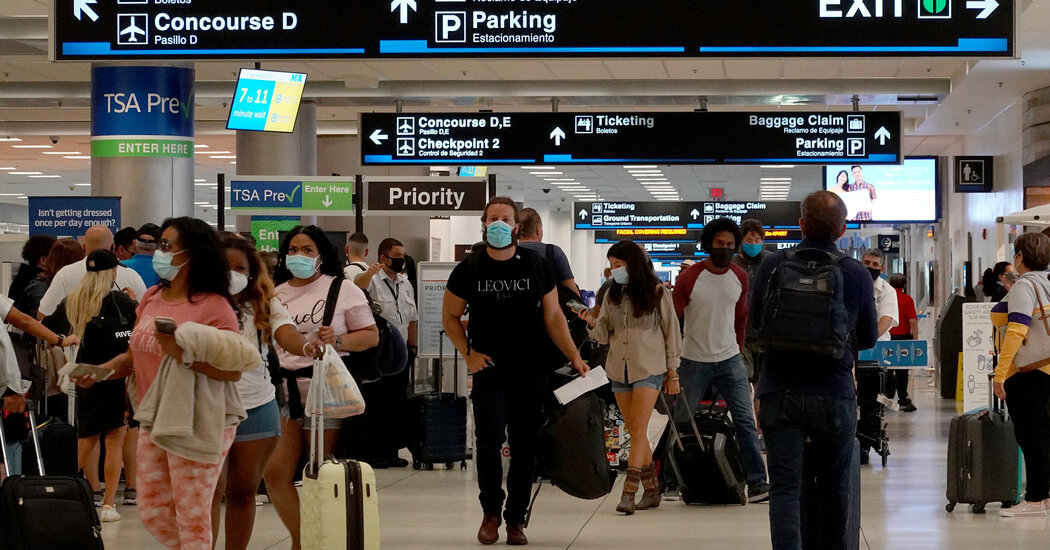 
A recent run-up in consumer prices cooled slightly in August, signaling that although inflation is higher than normal, the White House and Federal Reserve may be beginning to see the slowdown in price gains they have been hoping for.

Policymakers have consistently argued that a surprisingly strong burst of inflation this year has been tied to pandemic-related quirks and should prove temporary, and most economists agree that prices will climb more slowly as businesses adjust and supply chains return to normal. The major question hanging over the economy’s future has been how much and how quickly the jump will fade.

Tuesday’s data suggested that a surge in Delta-variant coronavirus cases is weighing on airfares and hotel rates, but it also showed that price increases for key products — like cars — are beginning to moderate, helping to cool off overall inflation. The Consumer Price Index rose 5.3 percent in August from the prior year, data released by the Labor Department on Tuesday showed. That’s a slightly slower annual pace than the 5.4 percent increase in July.

On a monthly basis, price gains moderated to a 0.3 percent increase between July and August, down from 0.5 percent the prior month and a bigger slowdown than economists in a Bloomberg survey had expected.

The news on core inflation, which strips out volatile food and fuel prices to try to get a cleaner read of underlying price trends, was even more encouraging for policymakers hoping to see signs that price increases are slowing. That index picked up by 0.1 percent on the month and 4 percent over the past year, down from 0.3 percent and 4.3 percent in the July report.

White House economists greeted the report as confirmation of their view that prices should stop climbing so quickly headed into 2022.

“We view the report as consistent with the story we, the Federal Reserve and the vast majority of forecasters have been talking about,” Jared Bernstein, a member of the White House Council of Economic Advisers, said after the report was released. “It’s one month, and we’re going to continue to vigilantly watch the data.”

Inflation has been running hot this year as the economy has reopened from the pandemic, causing airline fares and hotel room rates to bounce back from depressed levels. At the same time, supply chain snarls have pushed shipping costs higher, feeding into prices for all sorts of products, from lumber to toys. Labor costs have climbed for some companies, nudging inflation up around the edges, and rents are rising again as workers return to cities after fleeing during 2020.

But policymakers are betting that annual price gains will settle down toward the Fed’s 2 percent average target over time. Officials define their target using a different index than what was released on Tuesday, a measure known as the Personal Consumption Expenditures index. That gauge has also picked up this year, but by less, climbing by 4.2 percent in the year through July.

“The rapid reopening of the economy has brought a sharp run-up in inflation,” Jerome H. Powell, the Fed chair, acknowledged in a speech last month. But “the baseline outlook is for continued progress toward maximum employment, with inflation returning to levels consistent with our goal of inflation averaging 2 percent over time.”

Central bankers are hoping that quick inflation will dissipate before consumers learn to expect steadily higher prices, which can become a self-fulfilling prophecy as shoppers accept loftier price tags and workers demand higher pay. A closely watched tracker of household inflation outlooks released by the Federal Reserve Bank of New York on Monday showed that expectations rocketed up to 5.2 percent in the short term and 4 percent in the medium term.

That data point is disquieting, but market-based inflation expectations have been relatively stable after moving up earlier this year, and real-world prices may begin to ease in important categories in the months ahead.

The price index for airline fares declined in August, the Labor Department report showed, which may have been partly because a virus surge affected travel and advance bookings.

But the price index for used cars also fell, a signal that inventories are returning to more normal levels, helping to restore some regularity to the pre-owned vehicle market. Cars have been in short supply this year amid a computer chip shortage tied to shipping snarls and factory shutdowns overseas, and a surge in prices for used vehicles has been a major contributor to overall inflation in the United States.

Prices are still picking up for new cars, and a measure of housing costs tied to local rental conditions — which makes up a big chunk of the overall price index — continued to climb at a steady pace.

Mr. Lebas said he thinks those housing costs will help to keep inflation slightly elevated into next year, perhaps in the mid-2 percent range.

That’s “higher than it’s been historically, but not scary high,” he said. “If that happens, it’s a win for the Fed.”

The central bank is closely watching inflation as it considers when and how to reduce the big bond purchases it has undertaken to help cushion the economy against the pandemic shock — a move that officials have repeatedly signaled could come later this year. The report likely confirmed expectations among key officials, keeping policy on its measured and heavily-communicated course.

“At the margin, the recent data will dampen some of the more excitable inflation forecasts in the markets and at the Fed,” Ian Shepherdson, chief economist at Pantheon Macroeconomics, wrote in a note following the release.