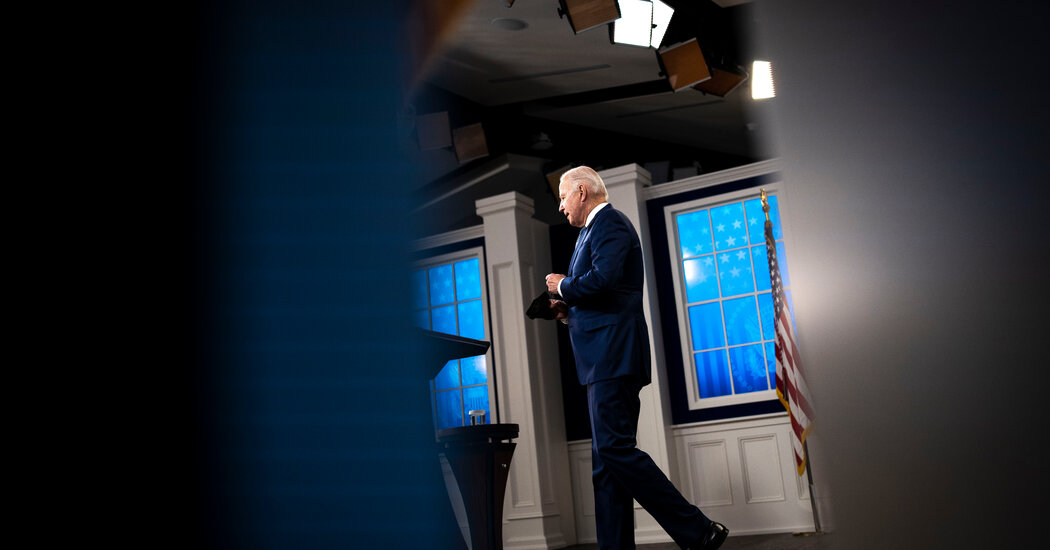 
WASHINGTON — With prices rising across the economy and a new variant of the coronavirus threatening another wave of the pandemic, President Biden stepped to a White House microphone and tried to convey a sense of normalcy.

“We’re looking ahead to a brighter and happier December,” Mr. Biden said on Wednesday. He ticked through a list of actions by his administration that he said would help ensure fully stocked shelves in groceries and retailers through the holidays.

Asked by reporters if he was worried that the Omicron variant, which officials announced later in the day had been detected in California, would threaten that progress, the president was undeterred.

It could be a long and anxious December for many Americans, given that inflation is at its highest rate in decades, global delivery delays are limiting the availability of some products and the uncertainty of Omicron is looming over what was already a halting recovery from recession. On Wednesday, the stock market tumbled for a second consecutive session, with the S&P 500 closing down 1.2 percent after the Omicron news broke. The Nasdaq composite lost 1.8 percent.

Mr. Biden, for his part, tried to reassure Americans that this holiday season would be better than the last.

He stacked his day with policy pronouncements on supply chains and World AIDS Day and ended it with a White House ceremony for the fourth night of Hanukkah, a throwback to prepandemic celebrations in Washington. He stressed the positives of the national economy.

His top infectious disease expert said it was OK for Americans to enjoy a glass of eggnog, unmasked, at a cocktail party this month — under certain circumstances, at least.

It was the president’s latest attempt to balance the nation’s desire to return to something resembling a normal life with the bracing reality that the virus is continuing to kill nearly 1,000 Americans a day, and still disrupting economic activity.

Global supply chains have been choked by the pandemic recession and recovery, leaving many Americans, Mr. Biden noted, to fear they will not be able to find the food or toys they want for their celebrations.

The president said those fears would prove largely unfounded, claiming progress from his administration’s actions to clear port backlogs and ease the delivery of more goods to market at a time when Black Friday sales jumped nearly a third from the year before.

He cited comments and commitments from a wide range of retail executives he met with on Monday at the White House to discuss inflation and supply issues, saying that physical and online retailers alike had assured him they were well prepared for a rush of spending.

“Those shelves are going to be stocked,” Mr. Biden said.

Mr. Biden also emphasized slight improvement on the price spikes that have depressed consumer confidence and his approval ratings, including increases for food, appliances and gasoline. He said his decision last week to release 50 million barrels of oil from the nation’s emergency reserves had already begun to reduce oil prices worldwide and would soon provide relief at the pump.

The big dip in prices in recent days has come not from the release of reserves, coordinated with several other nations, but from fears that Omicron will once again depress driving and other demand for oil as it rips through the world economy.

Businesses continue to struggle to overcome supply chain delays. According to a new index published by Flexport, a global freight forwarder, shipping times from Asia to the United States and from Asia to Europe remain at or near record highs — and double what they were in March 2019.

A surge in the Omicron variant could lead to further delays, if ports and factories shutter and warehouses and trucking companies have an even harder time finding people to work. This year, China shut down some of its most active ports after small outbreaks of the virus as it sought to quickly contain its spread.

Health experts have not yet determined the answers to crucial questions about how the variant might behave, including whether it might prove more adept at evading vaccines, which would in turn determine how much it might crimp growth or affect inflation. Analysts have warned in recent days that it is throwing new uncertainty into their forecasts.

Researchers at BNP Paribas wrote on Wednesday that the variant presented several possible scenarios for the global economy, ranging from a relatively minor bump that passes quickly to a “significant near-term hit to economic activity.” Analysts at Moody’s wrote that “business plans to gradually return to a post-pandemic new normal are now uncertain.”

Mr. Biden sided with the brighter view, telling reporters that “what we’ve seen so far does not guarantee” that the variant will worsen supply chain issues.

Dr. Anthony S. Fauci, the nation’s top infectious disease expert, told reporters in an ensuing briefing at the White House that the variant was no reason for Americans who were already vaccinated and boosted to change their behaviors beyond existing guidance from federal officials. Asked if Americans should feel free to attend holiday parties and drink unmasked, Dr. Fauci said it depended on the size of the gathering.

“In a situation with a holiday season, indoor-type settings with family that you know is vaccinated, people that you know, you can feel safe with not wearing a mask and having a dinner, having a reception,” he said. But in larger public settings where it is unclear if everyone is vaccinated, he said, people should wear masks except to eat or drink.

Mr. Biden and other Democrats sprinkled holiday reminders through the rest of the day, with only brief references to Omicron. The president spoke at a ceremony to light the menorah on Wednesday evening, in a packed ceremony that included Senator Chuck Schumer of New York, the chamber’s first Jewish majority leader.

Mr. Schumer struck a more somber tone than the president earlier in the day, saying that the season “is a reminder that in the face of awful adversity we cannot lose faith in God’s providence. In the face of darkness, Hanukkah teaches that rather than curse the darkness we must light a candle.”

Mr. Biden held his celebration of World AIDS Day in the East Room, which was decked with several Christmas trees, and with wreaths hanging over its mirrors. He began his supply chain remarks in the South Court Auditorium — which was adorned with flags, not tinsel — by noting he would light the National Christmas Tree on Thursday evening.

Even when he talked about global shipping, Mr. Biden could not resist a holiday reference. Mr. Biden recalled runs on hot toys, like Cabbage Patch Kids in the 1980s and Beanie Babies in the 1990s, “in past years when there was no supply chain problem.”

Shipping companies like UPS and FedEx this year are on track to deliver more packages than ever, Mr. Biden said. But he offered a caveat for children: “I can’t promise that every person will get every gift they want on time. Only Santa Claus can keep that promise.”