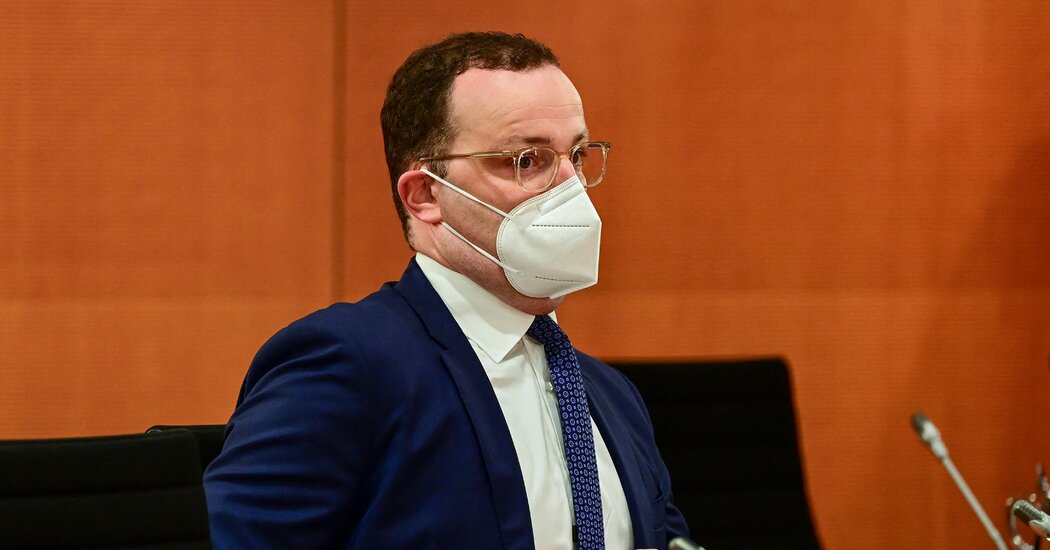 
With winter looming, German health officials and experts have raised concerns about a new surge of coronavirus cases. Infections in Germany — about 12,775 daily on average — have increased by 57 percent in the past two weeks, according to a New York Times database. Deaths on average in the same period have increased by 11 percent.

The surge comes as many European countries slowly lifted lockdowns this summer after months of restrictions driven by variants of the virus.

A national state of emergency is currently in place in Germany — which allows the government to unilaterally impose restrictions on states — but it is set to expire on Nov. 25. The order can be extended by a parliamentary vote, and some state officials are advocating that lawmakers do so.

Germany’s health minister, Jens Spahn, though, noted the country’s high vaccination rate and said that the emergency order could be lifted while other rules are put in place, like mask mandates and proof of vaccination. About 70 percent of the population has received at least one dose of a coronavirus vaccine.

Pandemic restrictions in Germany are set individually by the country’s 16 states, and in general, masks are required on public transportation and in stores. Since August, visitors to Germany have had to show proof of vaccination, recovery from infection or a recent negative test for entry to indoor public spaces, like restaurants, salons and gyms. Clubs in Berlin, famed for its hedonistic nightlife, reopened last month for the first time in over a year.

Cases are also resurging in Britain, where the government lifted virtually all restrictions in July, arguing that a rapid vaccination rollout had helped mitigate rates of hospitalizations and deaths. In June, the country reported as few as 2,000 cases a day, but last week, it reported an average of 47,209 new cases a day, a 30 percent increase over the average two weeks ago.

The government has rejected calls for an immediate reintroduction of some coronavirus restrictions, but it has also said that rules could be put back in place if a vaccine booster program did little to stop the spread. Health experts are cautioning that while vaccines do help prevent serious illness, they alone will not be enough to stop the upward trajectory of infection rates.

“Relying on the vaccine program to kind of take care of the problem is not going be a solution, I’m afraid,” Adam Finn, a member of a government vaccination committee, said to the BBC on Sunday. “It is really time that everyone got the message that they can’t just go back to normal if they want to avoid further restrictions later in the year.”

China reported 26 new cases of coronavirus on Saturday, as a spread of cases linked to domestic vacation travel continued to be felt around the country and officials ordered mass testing and lockdowns in some areas.

New cases were concentrated in the northwestern provinces of Inner Mongolia, Gansu and Ningxia. Four cases were also reported in Beijing, the capital.

China has imposed a strict regimen to control the spread of the coronavirus that first emerged in the city of Wuhan in late 2019. Its government has not reported any large or significant outbreaks this year.

The new domestic case numbers were down slightly from Friday, when 38 were reported, the highest since mid-September.

Several of the most recent cases have been linked to a couple from Shanghai who traveled to Shaanxi, Gansu and Inner Mongolia. A subsequent outbreak in the Changping district of Beijing was traced to a group of Beijing residents who had traveled to Inner Mongolia and back by car.

This week, Beijing has sealed off parts of the Changping district for large-scale testing, closed some community centers and asked residents not to leave the city unless necessary.

Five cities in Gansu shut down tourist attractions, theaters and other public places and imposed restrictions on movement to prevent further spread, the state-run Lanzhou Evening News reported on Saturday.

The United States was one of the first countries to begin vaccinating its population, and by summer, was leading most nations in getting shots in arms, with 67 percent of the population receiving at least one shot by July 4.

Today, 87 percent of people in Portugal are fully vaccinated, according to the Our World in Data project at Oxford University. That rate is second only to that of the United Arab Emirates, a far smaller country whose rulers exert considerably greater control. Earlier this month, Portugal ended nearly all of its coronavirus restrictions.

The United States, meanwhile, despite having a surplus of doses, has fully vaccinated only 57 percent of its population, according to a New York Time tracker. Resistance remains high among some demographic groups and within some specific work force sectors, including police officers and firefighters.

That has left the United States lagging behind dozens of nations in the pursuit of full vaccination. Although, with a population of about 330 million, it ranks third in the sheer number of administered doses, more than 411 million, after China’s more than 2.2 billion doses and India’s more than one billion.

Other early vaccination leaders have also stumbled. Israel got an early start on its vaccination campaign on Dec. 20 and rapidly outpaced virtually every other nation in getting jabs into arms — and now in giving booster shots to nearly half of its eligible population. But today, with hesitancy remaining among Arab, Orthodox Jewish and younger Israelis, the country reports that just 63 percent of its population is fully vaccinated, less than South Korea, Italy and some 40 other countries.

Public health experts blame the shortcomings of the U.S. effort partly on a toxic political environment, amplified by misinformation on social media and muddled messaging by government authorities.

“Every country has an anti-vax movement, but in most countries it’s exceedingly small,” said Dr. John Swartzberg, a professor at the School of Public Health at the University of California at Berkeley who has taught a seminar on vaccine hesitancy for several years. “It’s not a new movement, but it’s never had the traction it has today.”

Social media has been “irresponsible” in dealing with unfounded rumors, he said, and the United States has been “the poster child of a country that has not handled the messaging about vaccines.”

A lack of trust in authorities and expertise, along with deep political polarization, also played a key role in hampering the U.S. vaccination effort, said Dr. Michael Lauzardo, deputy director of the University of Florida’s Emerging Pathogens Institute.

In Asia, part of the turnaround comes from countries finally securing supplies and working out the kinks in their vaccination programs.

In countries like France, Italy and Canada, officials began requiring people to use health passports to show proof of vaccination to enter many establishments, a move that is credited with improving their vaccination efforts.

“We do not have the barriers of supply or distribution or access to the vaccine,” said Dr. Leana Wen, a public health professor at George Washington University. “The only barrier at this point is people’s willingness to be vaccinated. That’s what’s going wrong compared to other countries that have solved their supply, distribution and access issues.”

On Friday, the White House announced another administrative casualty: a delay in the release of a trove of records related to the assassination of former President John F. Kennedy.

The White House statement, signed by President Biden, did not make clear exactly how the coronavirus had delayed the release of the records, which must be released to comply with a 1992 congressional act, but said that the national archivist reported that the pandemic had a “significant impact on the agencies” that need to be consulted on redactions.

The archivist of the United States directs the National Archives and Records Administration, the repository of public governmental records. The position has been held since 2009 by David S. Ferriero, a former librarian at the Massachusetts Institute of Technology, Duke University and the New York Public Library. He is the 10th person in the role since the National Archives were established in 1934.

The White House statement said that the National Archives required additional time to conduct research and work with the agencies, which include the Defense, Justice and State departments.

The assassination of the 35th president, on Nov. 22, 1963, still holds a grip on the public imagination. It has also been the subject of an endless stream of conspiracy theories.

Despite an exhaustive, yearlong inquiry into the murder led by Chief Justice Earl Warren that concluded that Lee Harvey Oswald acted alone, surveys over the years have consistently found that most Americans believe others were involved.

The 1992 law required the government to make public the last of the Kennedy assassination documents by Oct. 26, 2017, unless the sitting president opted to withhold any for national security reasons. The Trump administration did release a trove of J.F.K. assassination records in the fall of that year. While the documents have been intriguing to researchers and conspiracy theorists alike, they have not conclusively changed the previous understanding of the assassination.

Mr. Trump, who himself has dabbled in an assassination conspiracy, claiming that the father of onetime rival Ted Cruz was somehow involved in Kennedy’s murder, pushed back the release date of some records to 2021.

In the White House statement on Friday, President Biden said he agreed with the archivist’s recommendation that records be withheld from public disclosure until December 2022.

“Temporary continued postponement,” he said, “is necessary to protect against identifiable harm to the military defense, intelligence operations, law enforcement, or the conduct of foreign relations that is of such gravity that it outweighs the public interest in immediate disclosure.”

The White House also said it wanted to make the J.F.K. documents more accessible. More than 250,000 records — more than 90 percent of the records agency’s collection on the assassination — have been publicly released and “only a small fraction” contain redactions. But many of the records are available only to the public if they travel to the National Archives site in College Park, Md.

The United States has suffered through five waves of the coronavirus pandemic now, depending on how one counts. Experts say what comes next is hard to predict, but looking back at the outbreak so far can provide some clues about how the virus may spread in the future.

“Each of these waves has a different complexity and pattern,” said Alessandro Vespignani, the director of the Network Science Institute at Northeastern University in Boston.

During the first wave, for instance, strict stay-at-home measures and drastic changes in behavior may have stalled the virus for a time. Last fall, with those measures and behavior comparatively relaxed, record-breaking surges in the Midwest rippled outward to the South and both coasts. By the time the highly contagious Delta variant fueled a wave across the country this summer, vaccines were widely available, shifting the pattern once again.

“Vaccines have clearly changed which places have been hit and how much they’ve been hit,” said Jennifer Nuzzo, an epidemiologist at Johns Hopkins University.

The most recent wave, this time fueled by the Delta variant, began in June when states lifted virtually all virus restrictions and people relaxed their behavior in celebration. Missouri saw the first big surge, then that moved across Arkansas, then Louisiana, both states with low vaccination rates.

Some experts say that the vaccination campaign and much of the country having already experienced several waves of outbreaks — which have conferred some immunity to those who were infected and recovered — have made them cautiously optimistic for the winter. Few experts are forecasting a substantial winter peak.

“We might see a little bump in cases, and of course people could radically change behavior or we could see a variant,” said Justin Lessler, a professor of epidemiology at the University of North Carolina.