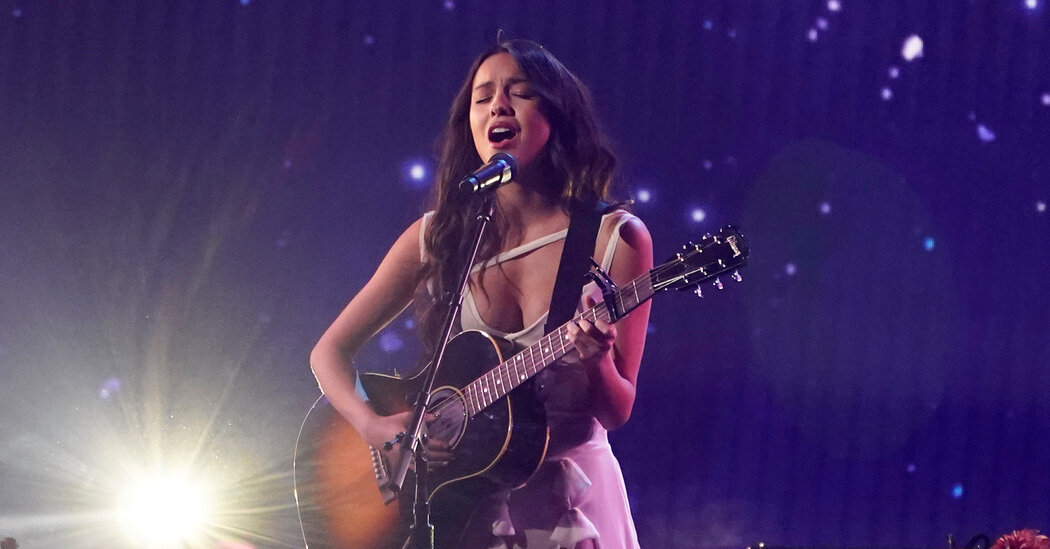 
In the latest tweak to this year’s Grammy Award nominations, Taylor Swift and two of her collaborators have been removed from the ballot as songwriters on Olivia Rodrigo’s “Sour,” which is up for album of the year.

Why? Months after the release of “Sour,” Swift, Jack Antonoff and Annie Clark (better known as St. Vincent) were added to the credits of Rodrigo’s song “Deja Vu” after similarities were pointed out between that track and Swift’s “Cruel Summer,” from 2019. But while the Grammys now recognize most songwriters for album of the year — which, in the case of releases by Kanye West and Justin Bieber, brings in dozens of names — it disqualifies the writers of samples or “interpolations,” a term of art for snippets of music that are recreated in a studio rather than lifted from an earlier recording.

When the official nominations were announced in November, Swift, Antonoff and Clark were on the ballot. But on Sunday, the Recording Academy, the organization behind the awards, removed them. (Swift remains an album of the year contender for her own release, “Evermore.”)

“Last week, we received the correct credits from the label that recognize Annie Clark, Jack Antonoff and Taylor Swift as songwriters of an interpolation on the track, ‘Deja Vu,’” the academy said in a statement. “In keeping with current Grammy guidelines, as songwriters of an interpolated track, Clark, Antonoff and Swift are not nominees in the album of the year category for ‘Sour.’”

The ban on interpolation credits also means that the writers of another track, Paramore’s “Misery Business” — who were added to the official credits for Rodrigo’s song “Good 4 U” — cannot share in the nod for “Sour.” Another “Sour” track, “1 Step Forward, 3 Steps Back,” also interpolates a Swift song, “New Year’s Day” (2017), written by Swift and Antonoff.

Grammy rules also explain the absence of a songwriting nomination for Cole Porter on Tony Bennett and Lady Gaga’s “Love for Sale,” a collection of a classic Porter songs like “Night and Day,” “It’s De-Lovely” and the title track. The awards recognize only the contributors of new material; most of Porter’s songs on the album are standards that date to the 1930s.

Last week, the academy removed Marilyn Manson from the best rap song category and added a songwriter, Linda Chorney, to the best American roots song category. (Manson was cited in error as a writer on West’s “Jail,” and Chorney, who has criticized the Grammy process in the past, was reinstated after an “audit” by the academy’s accounting firm flagged her name.)

In last month’s nominations, the academy also expanded the ballot for in the top four categories — album, record and song of the year, and best new artist — to 10 slots apiece, from eight, after a last-minute approval by the organizations’s board of trustees.

The 64th annual Grammy Awards ceremony will be held on Jan. 31.