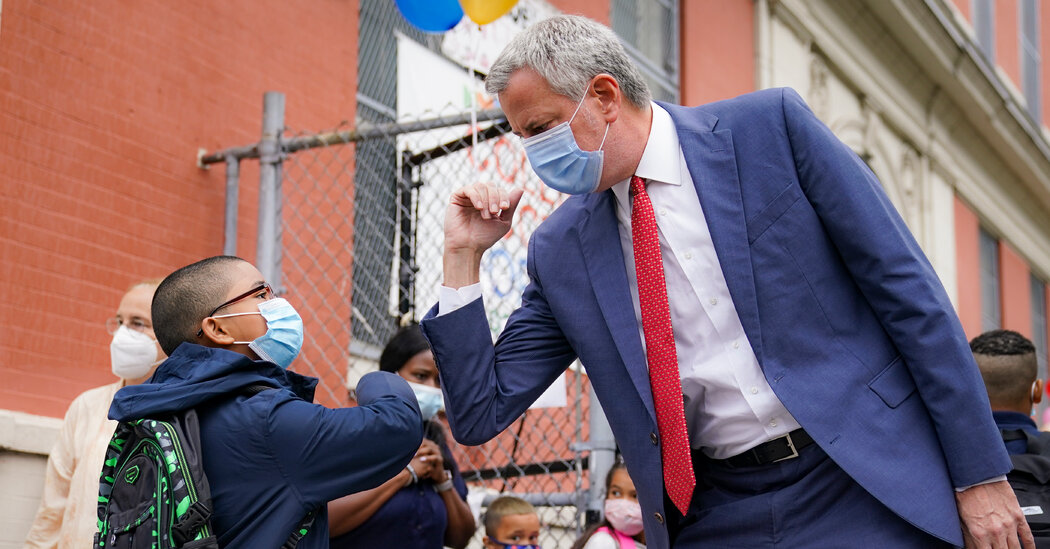 
Shortly after he took office eight years ago, Mayor Bill de Blasio vowed to tackle inequality in New York City’s public schools. But as the mayor enters his final months in office, the city’s schools remain among the most racially segregated in America.

Now, Mr. de Blasio is planning one last attempt to fulfill his promise before he leaves City Hall. With little to lose politically, the mayor is soon poised to overhaul how students are admitted into the city’s gifted and talented classes, a move that could fundamentally reshape competitive school admissions.

The moment holds enormous opportunity, said Jonathan Plucker, a professor at the Johns Hopkins University School of Education, who believes the city has the potential to serve as a model for other districts trying to integrate their own gifted classrooms.

“If New York can do it, everyone else is going to start to do it,” he said. “It could be transformative.” But Mr. Plucker predicted that the system won’t be changed without a fight. “There’s no way New York City will come out the other side without it being nasty,” he said.

Any significant change will almost certainly alarm parents who have come to rely on gifted classes. At the same time, many integration activists would be frustrated if the city does anything short of eliminating separate gifted classes altogether.

In the city’s roughly 80 gifted programs, which serve about 16,000 children in kindergarten through fifth grade, white and Asian American children make up about 75 percent of students. Those groups constitute just 25 percent of the overall school system.

Though the gifted classrooms serve only a fraction of the 1 million children in New York City public schools, they are a particularly glaring symbol of segregation and help create what many experts consider a two-tiered educational system for children as young as 4. If that system changed, it could upend New York’s unusually heavy reliance on sorting children into different schools according to academic ability, long a distinguishing feature of the city’s school system.

What exactly Mr. de Blasio plans to do is still unclear, though he has promised to announce the shift this fall.

Over the last few months, the mayor’s senior education officials have been quietly reaching out to national researchers who study gifted education. Suggestions have ranged from starting gifted programs later than kindergarten to screening all students for gifted classes, rather than relying on parents to sign their children up for entry exams. Some experts believe the city should get rid of gifted programs in elementary schools altogether.

Whatever Mr. de Blasio decides will leave the mayor’s almost-certain successor, Eric Adams, with an entirely new gifted admissions system to implement early in his tenure. While Mr. Adams could technically reverse whatever decision Mr. de Blasio will make, it would be extremely confusing for families to have to adapt to another set of changes before the application process starts next year.

Mr. de Blasio has, until recently, avoided taking on gifted admissions. For the last three years, he has largely ignored a recommendation, made by an integration task force he himself convened, to eliminate the city’s current system.

But last year, the mayor eliminated the entrance exam that 4-year-olds had to score highly on to gain admittance to gifted schools. Instead, he created a temporary system under which parents could sign their children up for interviews or preschool teachers could refer toddlers for gifted programs. The mayor declined to comment for this article.

Researchers said the fact that a small number of high-achieving students are placed together in separate classrooms is the main feature that distinguishes the city’s gifted classrooms from general education classes.

While instruction in gifted classes is often more accelerated, the material is often the same as in regular classrooms. “There’s no specific training or curriculum,” said Halley Potter, a senior fellow at the Century Foundation, a left-leaning think tank. “It’s all over the board.”

Still, gifted classes are in high demand. That’s because the programs allow children to get on a conveyor belt that moves a small slice of New York’s students through a parallel educational track, apart from their peers, starting in kindergarten.

The programs were created in part to keep middle-class families in public schools at a time when the system was largely poor-performing and many schools were unsafe. Though the system has improved, the relatively small number of families who have gained access to gifted programs have come to depend on them.

A group of parents who are skeptical of admissions changes aimed at integrating high schools has recently ramped up its organizing efforts to keep the current gifted system.

Dozens of parents recently sent a form email to politicians, saying that the mayor’s looming decision had upset parents “who are questioning if public schools are still the right choice if they are constantly at the whims of wherever the political winds may be blowing that day.”

And there is deep skepticism about changes to gifted programs among some Black and Latino families who consider the classes a refuge from struggling neighborhood schools. Those parents, along with some elected officials in predominantly nonwhite neighborhoods, have said eliminating gifted programs would prevent some children from reaching their full academic potential.

Yiatin Chu, a Manhattan parent who signed the email to politicians, said there was wide support among members of the group for some changes to the admissions program, despite their deep concern about the city eliminating the programs altogether.

Ms. Chu, who is the co-president of PLACE, a parent group that has pushed for accelerated academic options in city schools, said families simply wanted a role in shaping the next iteration of gifted education — and that they thought it was unfair that they have been left in the dark for so long.

“Still not knowing as we enter this new school year is just really disrespectful of families,” she said.

But while gifted programs remain popular with many families, Vanessa Leung, the co-executive director of the Coalition for Asian American Children and Families, said her conversations with Asian American families have shown an openness to a new, potentially less stressful admissions system for gifted education.

Ms. Leung said the families she has spoken with are wondering: “Do we really want to create so much pressure for kids that young?”

Integration activists could ramp up pressure on Mr. Adams to prioritize a range of school integration strategies. Mr. Adams, who attended segregated schools in New York City as a child, initially supported the push to eliminate the city’s admissions exam for specialized high schools, which enroll tiny numbers of Black and Latino students, but he quickly reversed course in the face of huge resistance.

But in the past, Mr. Adams and other elected officials have offered up what experts say is a deceptively simple solution: adding more gifted programs in predominantly Black and Latino neighborhoods.

“Doubling down on the bad bet the city has been playing for 20 years is a huge mistake,” said Mr. Plucker, who is a strong proponent of gifted programs in general. It’s unlikely that the programs will become significantly more diverse without fundamental changes to admissions, he added.

Instead, he and others said, the mayor should rethink the entire system, starting with the age at which children should be eligible. Eliminating separate gifted classes for very young children and starting them in late elementary school is broadly popular among experts, and is considered the simplest route for Mr. de Blasio to choose.

But even if gifted classes started in fourth grade rather than kindergarten, the mayor would still have to decide how to determine which students get a spot.

New York could evaluate every student for academic talent, an increasingly popular strategy known as universal screening. Schools could use a single standardized test, for example, but select students by comparing their scores with their peers within the same school, rather than with students across the city. And schools could also consult teachers about which students they think might excel even if they did not score well enough on the test.

Some say the mayor should go further, and get rid of separate gifted classrooms for elementary school children altogether.

Such a move might actually improve the quality of all schools across the system, a lofty goal that has eluded mayors for decades, said Shael Polakow-Suransky, president of the Bank Street College of Education.

“I think the minute you start pulling kids out of the population and separating them out, you are weakening instruction for everyone else,” he said. “Pulling out smart kids and dollars to plug into schools for smart kids is a bad strategy if you believe it’s possible to make all public schools good.”

Mr. Suransky, who helped lead the Department of Education under Mr. Bloomberg, said New York’s practice of sorting young children by academic ability has “proliferated at a level that is much bigger than other school systems. Usually systems have a little bit of this, but we have a lot of it.”

Some parents wonder whether having separate gifted classes is even worthwhile. A few years ago, a group of families at Public School 9 in Brooklyn kept hearing from their children’s teachers that there was little difference between gifted classrooms and general education classes.

“There was no demonstrable difference we could see between the tracks,” said Kirsten Cole, a former P.S. 9 parent. “It just ended up producing a segregated school,” even though P.S. 9 is unusually diverse.

After years of internal meetings with families, many of whom were at least initially skeptical, P.S. 9 got rid of its gifted classes in 2020.

Ms. Cole said she believes the rest of the city should follow suit.

“I know that people feel it’s risky and it’s hard to make a change,” she said. “My lived experience tells me it’s not a risk.”