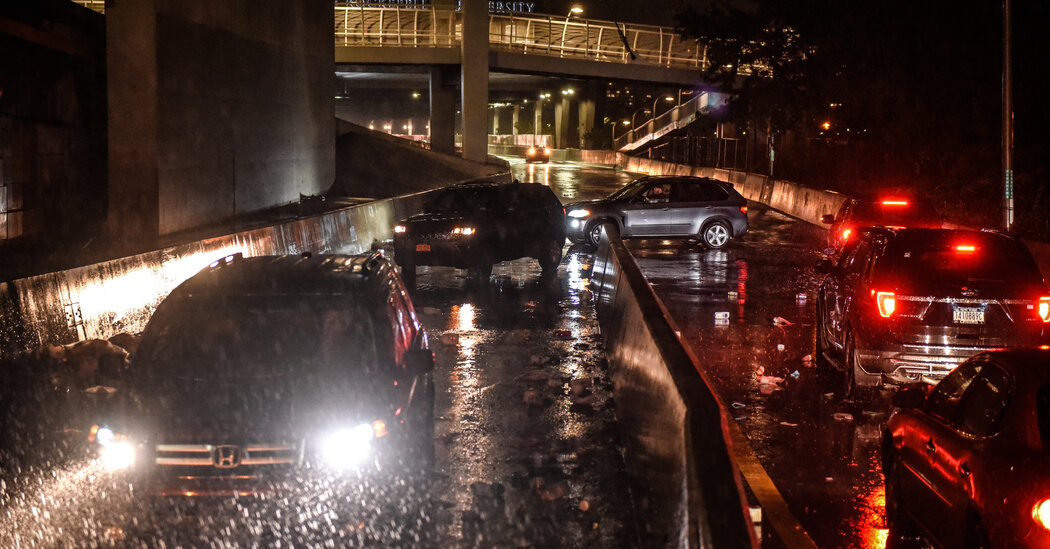 
City buses turned into amphibious vehicles, plowing through several feet of water, past orange traffic cones floating like buoys in the muck.

Subway stations roared with the sounds of rushing water that cascaded through platforms and down the stairs as if from a churning waterfall, flooding the tracks below.

In parts of Brooklyn, cars moved through lakes of mud-brown water, their headlights shining on waves that formed in front of their wheels and lapped at the feet of brownstones.

The sudden inundation from the remnants of Ida transformed familiar scenes of life in New York into otherworldly and waterlogged chaos on Wednesday night. The rain continued into early Thursday morning.

It was frightening and foreboding — a vision, many said, of the future as climate change produces more extreme and heavy rainfall during storms.

Nearly every subway line in the city was shut down, and Mayor Bill de Blasio declared a state of emergency, citing the “record-breaking rain across the city, brutal flooding and dangerous conditions on our roads.”

“If you’re thinking of going outside, don’t,” he said on Twitter. “Stay off the subways. Stay off the roads. Don’t drive into these heavy waters.”

The National Weather Service placed New York City under a flash flood emergency for the first time after the city was socked with torrential rainfall.

Over a single hour — between 8:51 and 9:51 p.m. — Central Park recorded 3.15 inches of rain, smashing a record set only last week, when 1.94 inches of rain fell in the park during Tropical Storm Henri.

Not everyone was heeding the official warnings to stay inside.

Social media filled with images of delivery workers driving or pushing bicycles through the floodwaters. One video posted on Twitter showed a man floating on an inflatable raft in a flooded alleyway, casually puffing on a hookah. Other videos showed cars trapped on flooded boulevards.

“We are seeing way too many reports of water rescues and stranded motorists,” the New York office of the National Weather Service said on Twitter. “Do not drive through flooded roadways. You do not know how deep the water is and it is too dangerous.”

All across the city, wild scenes were unfolding.

City officials warned that 60-mile-an-hour wind gusts were expected. And the wind-driven rain poured through the roof of Louis Armstrong Stadium, pelting fans who opened umbrellas and delaying a match at the U.S. Open in Queens.

The Film Forum, an art-house cinema in Manhattan, flooded during a showing of the French film “La Piscine”, leading audience members to joke that it was an immersive experience.

On Broadway, theatergoers watching “Pass Over” eyed one another warily as some half-dozen screeching emergency alerts rippled through audience members’ phones — though the actors stayed in character.

The stunning storm was deadly serious, with unpredictable risks unfolding as the sluicing rain and gusting wind continued in the dark, taking some motorists and walkers by surprise. Residents in some neighborhoods posted videos of water rushing in through closed doors, filling hallways.

“We are BEYOND not ready for climate change,” Mark Levine, a City Council representative, declared on Twitter.