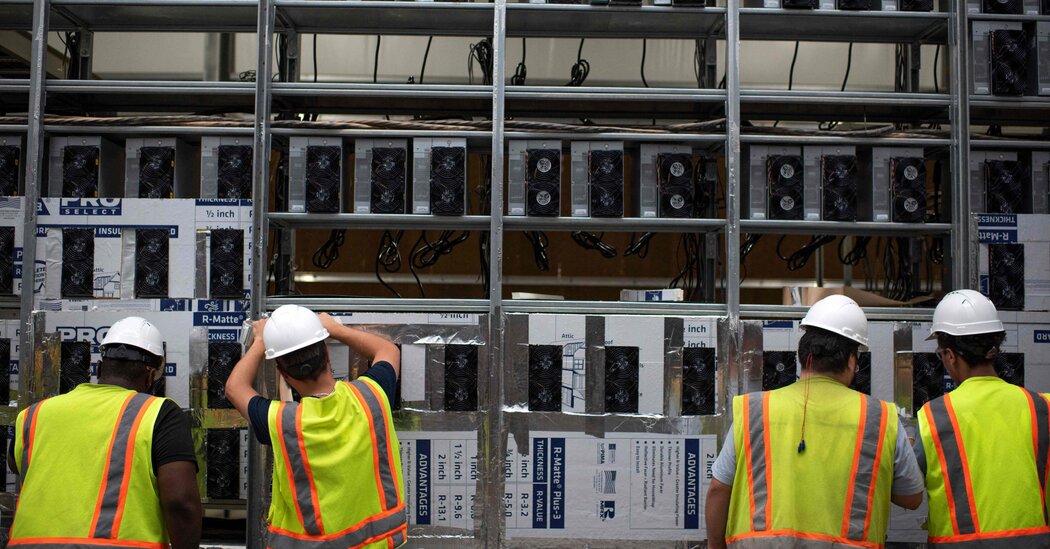 
Prices for Bitcoin, the largest cryptocurrency, plunged suddenly over the weekend, sinking nearly 20 percent amid a broad investor retreat from risky assets.

After hitting a high of more than $68,000 in early November, the price for the popular trading vehicle had been sliding for most of the month. Bitcoin sat at roughly $53,500 at the end of the standard trading session in the United States on Friday.

But unlike stocks and bonds, which have set trading hours, cryptocurrencies trade 24 hours a day and over the weekend. Bitcoin continued to slide after the end of the American trading day on Friday, and suddenly collapsed at roughly 11:30 p.m., when it dropped by around $10,000, or nearly 20 percent, in a matter of minutes, and then stabilized at roughly $42,300. By midday on Sunday it had recouped much of those sudden losses, climbing to roughly $48,600, or about 9 percent below where it was trading on Friday afternoon.

The sharp sell-off in the cryptoasset comes as financial markets have been struck by two waves of uncertainty, reigniting trading volatility. The arrival of the Omicron variant of the coronavirus has suddenly clouded previously optimistic expectations about a broad reopening of the economy. At the same time, the Federal Reserve has pivoted toward a more hawkish posture — Wall Street jargon for favoring higher interest rates.

Many analysts think the low-interest-rate policies — and money-printing programs — the Fed has put in place since the pandemic began in 2020 have been a crucial source of momentum for riskier investments such as stocks, and increasingly, cryptocurrencies.

And some cryptocurrency skeptics think Bitcoin investors could be in for additional pain if the Fed continues to shift its focus to fighting surprisingly high inflation, rather than supporting the growth of the economy.

“We believe that Bitcoin is likely to decline substantially in 2022 as the Fed stops its excessive liquidity injection into the capital markets,” Jay Hatfield, chief executive of Infrastructure Capital Management, a New York fund management firm, wrote in an email. “Since Bitcoin/cryptocurrency has no intrinsic value, it will be one of the first asset classes to be sold.”