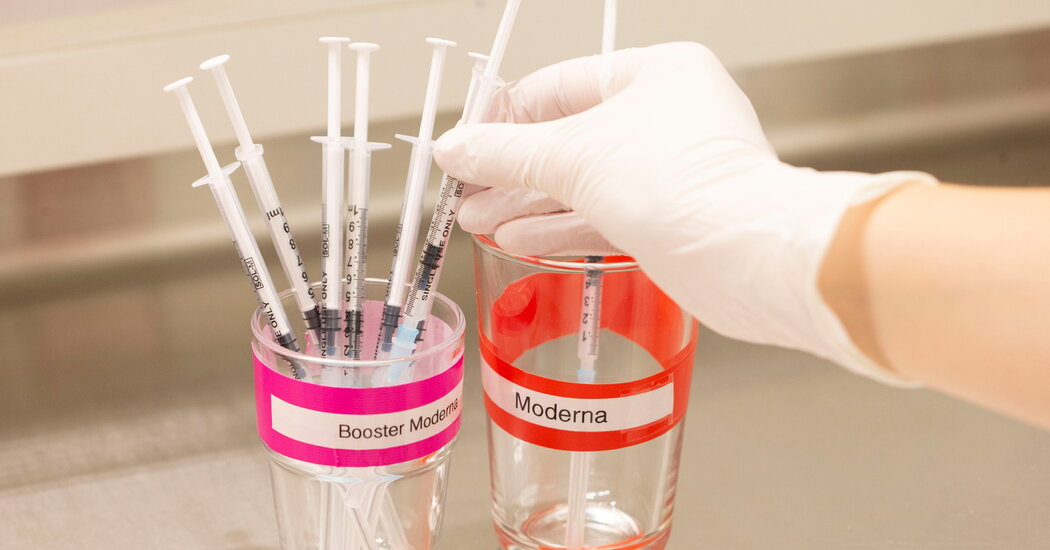 
People looking for a booster shot of a Covid-19 vaccine probably don’t need to fret about what brand it is: Many combinations of shots are likely to provide strong protection, according to a large new study.

In a comparison of seven different vaccine brands, British researchers found that most of them prompted a strong immune response, with the mRNA shots from Moderna and Pfizer-BioNTech eliciting the largest responses. The study was published on Thursday in The Lancet.

“These are welcome data for policymakers,” said Merry Voysey, a statistician at the University of Oxford who was not involved in the study. “The most significant take-home message here is that there are a large number of excellent boosting options for third doses.”

It’s too soon for researchers to say much about how well different vaccine boosters will work against the new Omicron variant, which has mutations that may allow it to evade some of the antibodies produced by existing Covid-19 vaccines. Some researchers suspect that people would need a very high level of antibodies to protect against it.

All of the study’s 2,878 volunteers initially received two shots of either the AstraZeneca or Pfizer vaccines. (Both of those vaccines are authorized in Britain; shots by Pfizer, Moderna and Johnson & Johnson have been authorized in the United States.)

The researchers then tested seven different vaccines as boosters: along with AstraZeneca and Pfizer, they tried three brands that have been authorized in various countries: Johnson & Johnson, Moderna and Novavax. They also tried two shots that have not been authorized anywhere: an mRNA vaccine from CureVac, and a vaccine from Valneva made from inactivated coronaviruses. Finally, some of the volunteers received a meningitis vaccine as a control.

After four weeks, the researchers collected blood samples from the volunteers and measured their antibody levels. They also looked for immune cells, known as T cells, that specifically attack other cells infected with the coronavirus.

Antibodies and T cell levels increased in people who received a Covid-19 booster shot compared with those who got the meningitis vaccine. The range was quite large, however. People who got the Valneva booster after a Pfizer vaccine saw only a 30 percent increase above the control group. But a Moderna booster produced at least a 1,000 percent increase.

The new study also found that boosters increased T cells that recognize the coronavirus. Antibodies may be good at knocking the coronavirus out early in an infection, when the virus is colonizing the nose. But deep in the airway, T cells may provide a second line of defense.

The trial did not follow the volunteers to see how well the booster shots actually prevented infection or disease. But in recent months, researchers have shown that measuring antibody levels can be a pretty good way of predicting the effectiveness of a vaccine.

Most of the boosters used in the study raised antibodies to a level that would be the equivalent of at least 90 percent protection against infection. And the mRNA vaccines by Pfizer and Moderna produced much higher antibody levels than the other vaccines did.

“I would say whatever you had first time around, having an mRNA booster is probably a good idea,” said Eleanor Riley, an immunologist at the University of Edinburgh who was not involved in the new study.

Still, other scientists said, most of the other vaccines in the study performed strongly enough that people should feel comfortable getting them as well.

Shifting views on boosters among experts. For months, many public health experts have opposed plans to roll out Covid booster shots to all adults. But as Omicron gains ground, researchers are changing their minds, and now believe that the shots may offer the best defense against the new variant.

“If your country or region of the world only has one of the vaccines that we’ve shown can boost, that will be fine to use as a booster and safe to do it,” said Saul Faust, an infectious disease expert at the University of Southampton and a co-author of the study. “It’s not all about mRNA.”

John Moore, a virologist at Weill Cornell Medicine in New York who was not involved in the study, said that people should not make too much out of the modest differences among most of the vaccines.

“I don’t regard it as a beauty contest, in the sense of which one is slightly higher than another one,” he said. “We can’t afford to be too precious about this.”

Dr. Moore said that the new study could give public health officials the confidence to turn to different vaccines for boosters, depending on which was most convenient. Novavax and Johnson & Johnson, for example, make vaccines that can be stored in refrigerators, whereas mRNA vaccines have to be kept frozen.

An inevitable shortcoming of the new study was that the researchers did not measure the boosters against the new Omicron variant. Only discovered last month, Omicron has raised serious concerns among researchers because of its many mutations. A booster that is 90 percent effective against the original strain might do worse against Omicron.

Just how much worse is unknown. Experiments on Omicron haven’t started because scientists must first figure out how to grow the variant in the laboratory. Dr. Faust and his colleagues have already sent blood samples from the trial volunteers to British government labs, where researchers will see how well their boosted antibodies and immune cells work against Omicron. “I think we’ll be starting to see those results in a few weeks,” Dr. Faust said.

If boosters don’t work well against the variant, vaccine developers will need to make new shots, said Dr. Stanley Plotkin, a vaccine expert and University of Pennsylvania emeritus professor. The mRNA vaccines could be rapidly adapted to target Omicron’s mutations, he added, or researchers could try a more challenging approach: a universal vaccine against any coronavirus.

“Assuming that Omicron escapes antibodies to the original virus and the current variants, then we have to have a different philosophy,” he said.