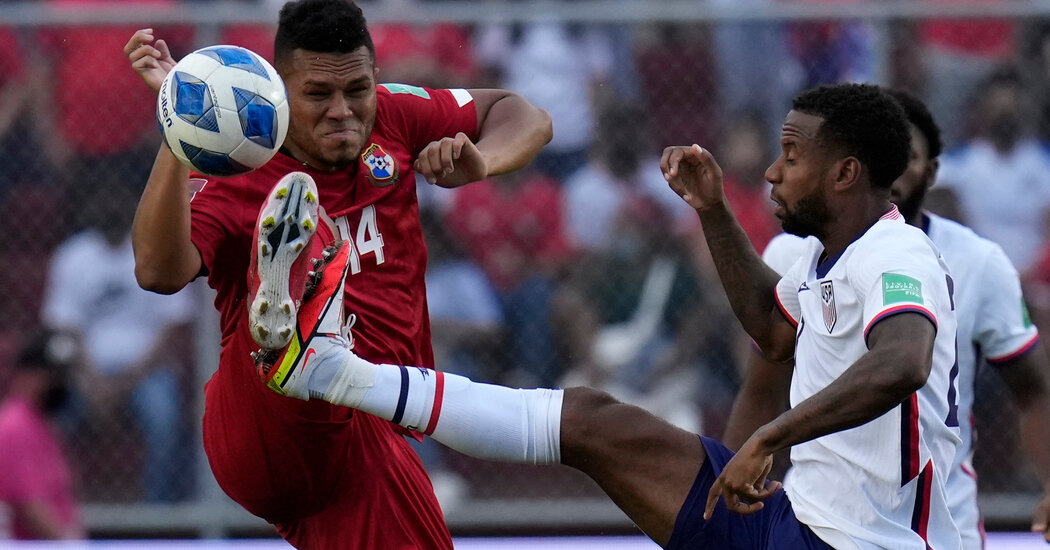 
Continuing the good vibes from one performance to the next can be tough, it turns out, when you switch out all of your top performers.

That was one of the harsh lessons learned by the U.S. men’s soccer team on Sunday as it fell limply to host Panama, 1-0, in its fifth qualifying match for the 2022 World Cup.

Things had looked so different on Thursday, when the Americans stomped to a 2-0 win against Jamaica in Austin, Texas. But with a quick turnaround between matches — and a third game to play on Wednesday night in Columbus, Ohio — U.S. Coach Gregg Berhalter made seven changes to his lineup.

The result of cycling in all those different faces was an utterly unrecognizable showing from the Americans, who struggled to connect on passes or mount attacks as they absorbed their first defeat in qualifying and fell to 2-1-2 in the final round standings.

To be fair, Panama offered a stiffer challenge than Jamaica had on Thursday. It had allowed only two goals in its first four games, and a loss last week in El Salvador left the Panamanians eager to regain their footing in front of their home fans.

The loss, in Berhalter’s 40th game as the team’s coach, ended its unbeaten streak at 13 games. The United States plays its third and final match of the month against Costa Rica on Wednesday night in Columbus.

Such an aggressive rotation of lineups from game to game during qualifying has become a preferred option for many coaches — and especially those who believe they have deep pools of talent — after FIFA tweaked its scheduling rules to allow confederations to hold as many as three games in each international window. Many coaches, Berhalter included, have been hesitant (with a few exceptions) to ask players to start three games in the course of a single week.

That meant the 18-year-old striker Ricardo Pepi, who scored two goals against Jamaica on Thursday, started Sunday’s game on the bench. So did Tyler Adams, one of the team’s leaders and midfield linchpins, and Brenden Aaronson, one of Berhalter’s best playmakers over the past two months.

Weston McKennie, another regular, stayed in the United States to rest a sore leg. And Antonee Robinson and Zack Steffen, who play professionally in England and would have faced a lengthy quarantine upon their return if they had traveled to Panama, did not make the trip, either.

(Other top American players, like Christian Pulisic and Giovanni Reyna, never joined the team for this camp while dealing with their own injuries. Pulisic, for example, spent Sunday watching an N.F.L. game in London.)

The United States, so sharp and aggressive against Jamaica, looked stagnant from the start against Panama. Clunky touches and wayward passes kept the Americans from establishing any sort of continuity or assembling anything close to a threatening attack; they managed only five shots, but none of them were on target.

Panama was clearly the aggressor. In the 14th minute, Rolando Blackburn found himself open in front of the goal, with a teammate’s cross hurtling toward his feet, but he shanked the point-blank shot wide of the right post, squandering the best chance of the first half for either team.

The American goalkeeper Matt Turner, who seems to have established himself ahead of Steffen as the team’s starter with a string of assured performances this fall, was tested throughout the night, watching attacks swirl before his eyes, rising to intercept several dangerous crosses and making numerous nervy saves.

He was beaten, finally, in the 54th minute, after Panama won a corner kick. Left back Eric Davis swerved the kick sharply toward the near post, where multiple players jumped to meet it. It was unclear at first who got the pivotal touch — U.S. striker Gyasi Zardes was there, as was Anibal Godoy of Panama — but the result was clear: The ball ricocheted inside the left post. Godoy, Panama’s captain, was more than happy to claim it, sprinting to the sideline with his hand in the air before being mobbed by his teammates.

Berhalter exhausted his substitutions soon after the halftime break, hoping to alter the trajectory of the game. Adams and Aaronson came in to start the second half, with hopes they might provide a spark. And about 20 minutes later — and with the United States now trailing — they were followed by Pepi, DeAndre Yedlin and Cristian Roldan.

But the jolt of energy never came, and the Americans missed a chance to build on the positivity that seemed to be bubbling within their group.