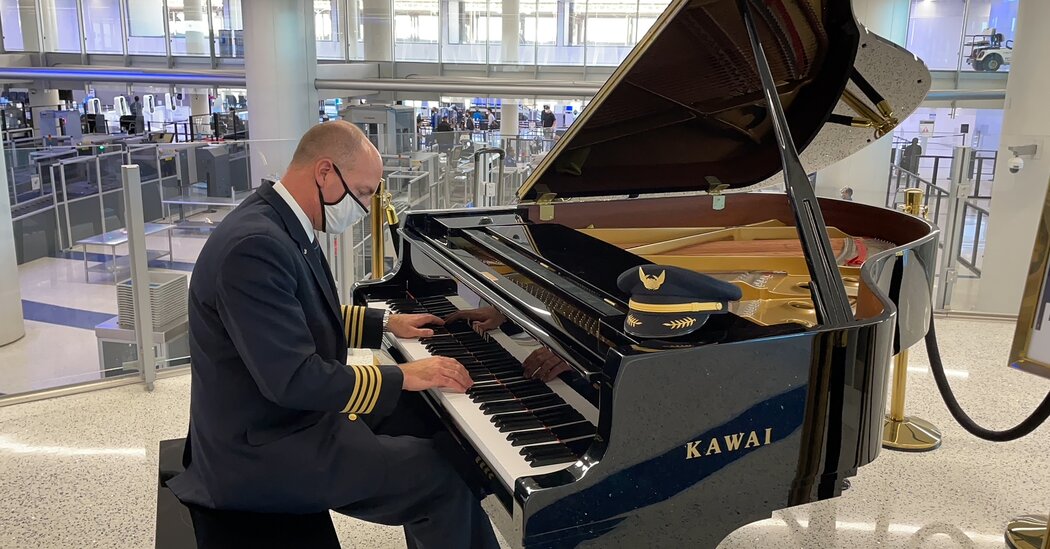 
It’s after midnight at the Palm Court in Cincinnati and staff is trying to close. Lights are dimmed as the last of the martini glasses and beer bottles are scooped up. But Beau Brant is still at the piano, playing for stragglers.

Finally, a waitress gives him the “wrap-it-up” sign. Probably a good idea, since he has a flight to catch the next day, and he can’t be late.

Perhaps there are other piano-playing airline pilots, but how many have cut seven albums, performed for a U.S. president and had an original song used by Oprah Winfrey?

Mr. Brant, 41, has been playing — and flying — most of his life. He started on the piano at age 3 and was flying by 12. A pilot with United Airlines for 17 years, Mr. Brant considers flying job number one. But with every layover, he looks for a place to play, just for the fun of it.

A regular performer now at many of his layover hotels, Mr. Brant flies domestic routes from his homebase in Denver to the likes of Madison, Wis.; Raleigh-Durham, N.C.; and Jackson Hole, Wyo.

He still has the occasional gig back home — his house piano is a Yamaha Grand — but gets most excited about playing on the road for his crew and strangers. And he’s fallen in love with the Bar at Palm Court, a soaring Art Deco venue in the Hilton Cincinnati Netherland Plaza: “The piano area reminds me of the Titanic’s ‘grand staircase.’ ”

His sets are a rambling mix of jazz, blues, classical and show tunes. His style features a flashy right hand and plenty of bounce but no sheet music. And he loves talking about his two passions.

The following are excerpts from conversations with Mr. Brant, edited for clarity.

How did this fly-and-play routine come about?

It started on a long-haul in 2005, New York to Frankfurt. We arrived early at the hotel, the rooms weren’t ready, and there was this beautiful piano in the lobby. I started playing for the crew and wound up playing happy hour.

You used to play professionally?

I grew up in Evergreen, just outside Denver, and played restaurants there when I was 12. Then hotels, weddings, birthdays — sometimes four or five nights a week. I wouldn’t be where I am today without music: Flight training is expensive.

What are some of the most exotic places you’ve played?

Paris, Zurich, Lisbon, Sydney, Shanghai. I flew international for much of my career. In 2019, I upgraded to captain on the Airbus 320 and now fly North American routes. But in the U.S., many hotels have retired their pianos, and they’re harder and harder to find.

Your layover sets can last for hours — no charge?

Sometimes I get food and drink, but that’s already covered by the airline. The tip jar can get anywhere from $20 to $200, but I use that to treat the crew to something. It’s definitely not about the money.

What’s your drink of choice while playing?

I enjoy a nice red wine, but there’s the 12-hour rule [the F.A.A. prohibits pilots from consuming alcohol 12 hours before work], and I’m very respectful of that. At the Plaza, it was soda water with lime.

They used me in a social media commercial playing our theme song, “Rhapsody in Blue.” I play that at pretty much every performance.

Are there similarities between flying and playing?

There’s an art to music and an art to flying. Pilots have to operate under very strict procedures, but we can put our own touch on things — “finesse” the aircraft. With music, you can play a composition exactly like it’s written, but I like to take it and add my twist. I encourage my first officers to hand-fly — turn off all the automation. Hand-flying can be much smoother — small, gentle movements, like with music pieces.

So, the president and Oprah Winfrey — how did those happen?

I performed for President Ford in 1992 in Vail, Colo. In 1999, one of my songs was in a video presentation for a fund-raiser sponsored by Oprah, in Chicago, for her “Angel Network.”

There’s still the masks, but we’re finally getting back to normal, bringing back food and drinks. I remember a flight last year when we had five crew and nine passengers.

What would be your dream gig?

I’d want to go back in time, to those Pan Am 747s that had a lounge with a piano. On the long-hauls, pilots get a break. I would have loved to play one of those lounges.

Beau Brant’s music can be found on beaubrant.com.