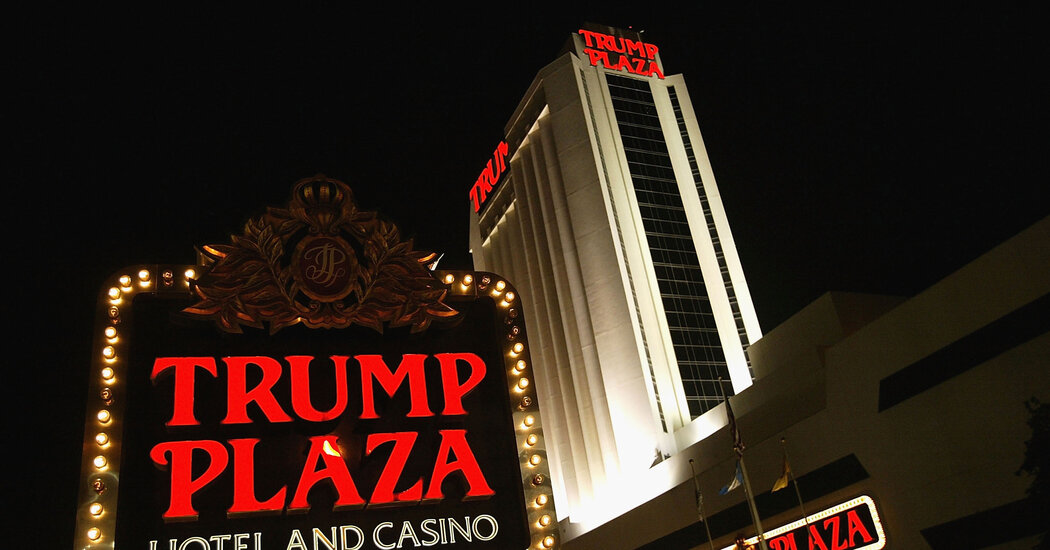 
Alan Lapidus, a New York architect with a playful and pragmatic style who designed large hotels and casinos, died on Oct. 15 at his home in Naples, Maine. He was 85.

The cause was prostate cancer, his son, Adam Lapidus, said.

Mr. Lapidus’s legacy included the towering Crowne Plaza Times Square Manhattan, which was designed to evoke a bedazzled Wurlitzer jukebox; the now-demolished Trump Plaza Hotel and Casino in Atlantic City; the Caesar’s Palace hotel and casino complex in Las Vegas; and the Hilton Hotel at Disney World in Orlando.

Before opening his own studio in 1976, Mr. Lapidus worked for 13 years for his father, Morris, a formidable designer of flamboyant postmodern hotels in Miami Beach — the Fontainebleau, the Eden Roc and Americana among them — which won commercial success along with a kind of infamy among disdainful critics at the time. (The buildings later came to be viewed as architectural classics.)

But Alan Lapidus, if not his father, received some positive acknowledgement in 1972 in connection with the only project by the Morris Lapidus firm ever to draw praise, if gingerly, from Ada Louis Huxtable, then the architecture critic for The New York Times. It had to do with a public pool and recreation complex in poverty-stricken Bedford-Stuyvesant, Brooklyn.

Ms. Huxtable wrote that while Morris Lapidus, who died in 2001, had conceived the project, “a new design philosophy appeared” when Alan Lapidus joined the firm, manifesting itself in projects like the pool, which, she judged, “was not glitter, but a serious, sophisticated solution” to urban blight. She pronounced it “good and appropriate.”

“I never mentioned the review to my father, but of course he had read it,” Alan Lapidus (pronounced LAP-ih-dus) wrote in his memoir, “Everything by Design: My Life as an Architect” (2007). “And he never mentioned it to me.”

Mr. Lapidus did not try to outdo his father, whose motto was “too much is never enough.” But he followed his advice, designing palatial lodgings and capacious gambling halls to create “participatory theater,” he wrote, in which guests could “indulge and fulfill their fantasies.”

“His theory was, if you create the stage setting and it’s grand, everyone who enters will play their part,” Alan Lapidus said. He embraced another of his father’s axioms: “Design for your client’s clients.”

To do so would require curvaceous motifs to eliminate long, gloomy corridors, for example, or windows set lower to the floor to make hotel rooms brighter and guests feel taller. It also meant accommodating plenty of shops and spas.

“The main concern of the management of every casino I’ve designed,” Mr. Lapidus said, “has been how to occupy the wife or girlfriend and keep her away from her man while he’s losing the mortgage money.”

Alan Harvey Lapidus was born on Sept. 27, 1936, in Brooklyn and raised in the Flatbush neighborhood. His father was an immigrant from the Black Sea city of Odessa. His mother was Beatrice (Perlman) Lapidus, a homemaker.

He graduated from Midwood High School, where he was voted “Best Writer,” even though his classmates included Erich Segal, the future Yale classics professor who would write the best-selling novel “Love Story” and other books. If not for pressure from his family to do otherwise, Mr. Lapidus once said, he would have become an author, too.

But he said he became more amenable to architecture after watching Gary Cooper play an architect in the 1949 movie “The Fountainhead” having a passionate moment with his boss’s daughter. (“That will put any thoughts about dental school on your back burner,” Mr. Lapidus wrote.)

He enrolled in Trinity College in Hartford, Conn., but dropped out after his sophomore year to join the Army. He then attended Columbia’s School of General Studies and graduated from the university’s School of Architecture in 1963.

His marriages to Rochelle Greenberg and Nancy Hoffman ended in divorce. In addition to his son, from his marriage to Ms. Greenberg, he is survived by his wife, Caroline Worthington, a concert cellist; and four grandchildren.

Mr. Lapidus was also a licensed pilot and, while working as an architect, served a stint as an auxiliary police officer in New York City. His designing career included encounters with clients involved in organized crime and an episode, he said, in which four government agents pretended to be his firm’s associates on a flight to Havana at a time when the Clinton administration was secretly trying to normalize relations with Cuba.

Among the other projects Mr. Lapidus worked on were the Gild Hall hotel in Manhattan’s Financial District and the resort hotel El Conquistador in Puerto Rico.

In his book, he couldn’t volunteer enough praise for Donald J. Trump, who had hired Mr. Lapidus to design the glitzy Trump Plaza Hotel and Casino in Atlantic City. (The building had a relatively brief life, however. Opened in 1984, it was demolished in February, less than a month after Mr. Trump left the White House and about a dozen years after he had cut ties with the hotel and casino in a series of bankruptcy filings, though his name had remained attached to it.)

Mr. Lapidus was 18 when he first met Mr. Trump, who was just a boy at the time, through their fathers. Morris Lapidus was working with the developer Fred Trump on an apartment complex in Brooklyn at the time, in the mid-1950s. In his book, Mr. Lapidus described Donald Trump as “the most honorable developer I’ve ever worked with.”

He took a dimmer view of his own profession, though, in light of a career that included bankruptcy and the partial collapse of a building he was working on in Puerto Rico.

After dealing with developers, lenders and finnicky clients and discovering that only about one-third of the structures he devised actually got built, Mr. Lapidus concluded in his memoir that “the surest method of getting rich from designing buildings is not so much to design them as to own them.”

“Architecture has been called ‘the second-oldest profession,’” he wrote, “but sometimes it bears a close resemblance to its older sister.”