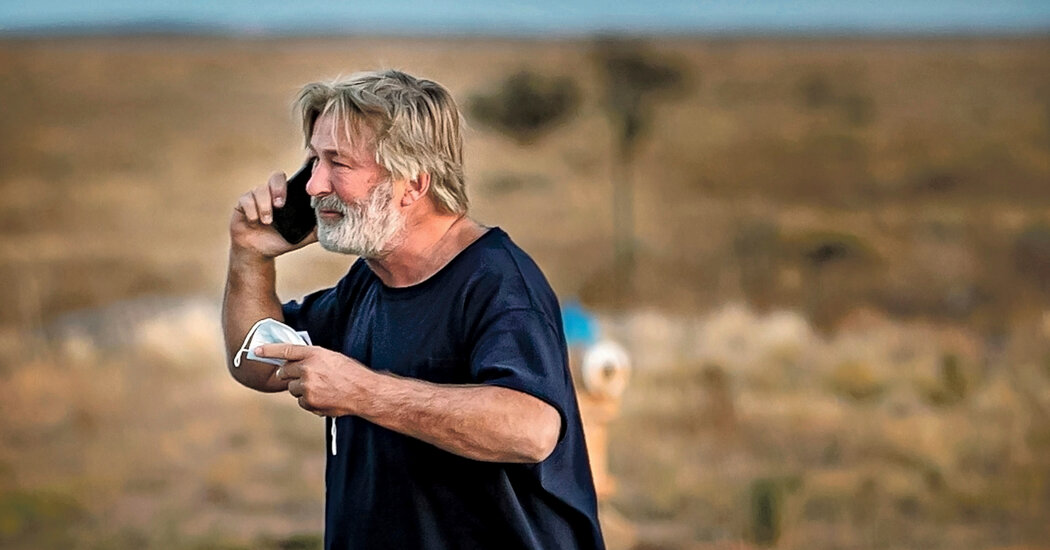 
Law-enforcement officials in Santa Fe County, N.M., plan to hold a news conference Wednesday on their investigation into what happened last week when the actor Alec Baldwin was rehearsing on a film set with a gun he had been told did not contain live ammunition when it went off, killing the film’s cinematographer and wounding its director.

Here is an overview of some of what has emerged about the case:

The Santa Fe County district attorney said on Tuesday that she was not ruling out criminal charges in last week’s fatal shooting.

“We haven’t ruled out anything,” the district attorney, Mary Carmack-Altwies, said in a telephone interview. “Everything at this point, including criminal charges, is on the table.”

Ms. Carmack-Altwies said that the investigation was focusing on ballistics in an effort to determine what kind of round was in the gun that killed Halyna Hutchins, the cinematographer — and who had placed the ammunition in the gun.

“There were an enormous amount of bullets on this set, and we need to find out what kinds they were,” Ms. Carmack-Altwies said.

Detectives are still interviewing people who were on the set, Ms. Carmack-Altwies said. “It’s probably weeks, if not months, of follow-up investigation that we’re going to need to get to the point of charging.”

Ms. Carmack-Altwies took issue with descriptions of the firearm used in the incident as “prop-gun,” saying that the terminology, which is used in some of the court documents related to the case, could give the misleading impression that it was not a real gun.

“It was a legit gun,” she said, without naming specifically what kind of firearm was used. “It was an antique-era appropriate gun.”

Ms. Carmack-Altwies said that she was aware of news reports suggesting that crew members had used guns with live ammunition for target practice hours before the fatal shooting, but said that the reports were “unconfirmed.”

Ms. Carmack-Altwies described the case as one of the most challenging in Santa Fe County in recent memory.

“We have complex cases all the time,” she said. “But this kind of complex case, with these kinds of prominent people, no.”

Shortly before the cinematographer Halyna Hutchins was fatally shot on a film set in the foothills of New Mexico, she smiled as she recorded herself riding a chestnut horse through the desert brush.

“One of the perks of shooting a western is you get to ride horses on your day off,” Ms. Hutchins wrote last week in an Instagram post.

On Thursday, Ms. Hutchins, 42, was killed when the gun that the actor Alec Baldwin was rehearsing with on the set of “Rust,” which he had been told contained no live ammunition, went off. Ms. Hutchins, who was the film’s director of photography, was struck in the chest and died after being flown to the University of New Mexico Hospital in Albuquerque. The film’s director, Joel Souza, was injured in the shooting and was released from a hospital.

Mr. Souza said in a statement on Saturday that he was “gutted” by the loss of Ms. Hutchins, writing that she was “kind, vibrant, incredibly talented, fought for every inch and always pushed me to be better.”

Ms. Hutchins’s husband, Matt Hutchins, wrote in a tweet on Friday night that his wife “inspired us all with her passion and vision, and her legacy is too meaningful to encapsulate in words.”

Ms. Hutchins grew up on a Soviet military base in the Arctic Circle, where, according to her personal website, she was “surrounded by reindeer and nuclear submarines.” She studied economics at the Agrarian University in Ukraine before switching to a journalism program at Kyiv National University. She later attended the American Film Institute Conservatory in Los Angeles.

On Friday, Mr. Baldwin released a statement on social media saying, “There are no words to convey my shock and sadness regarding the tragic accident that took the life of Halyna Hutchins, a wife, mother and deeply admired colleague of ours.” He said that he was in contact with Ms. Hutchins’s husband, adding, “My heart is broken for her husband, their son, and all who knew and loved Halyna.”

Among filmmakers in the United States, Ms. Hutchins was remembered as a skilled cinematographer with an artistic vision who was deeply committed to her work.

Adam Egypt Mortimer, the director of the 2020 superhero action movie “Archenemy,” on which Ms. Hutchins worked as director of photography, wrote on Twitter that Ms. Hutchins was a “brilliant talent,” pointing to a series of posts he made last year about Ms. Hutchins’s work. He had written that Ms. Hutchins’s “tastes and sensibility of what is cinematic were a huge asset for executing our style” and that she had been visually inspired by Jim Steranko comics.

“She was a true wartime sister,” Mr. Mortimer wrote, “fighting the battles to make this thing look amazing despite the unrelenting limitations and catastrophes.”