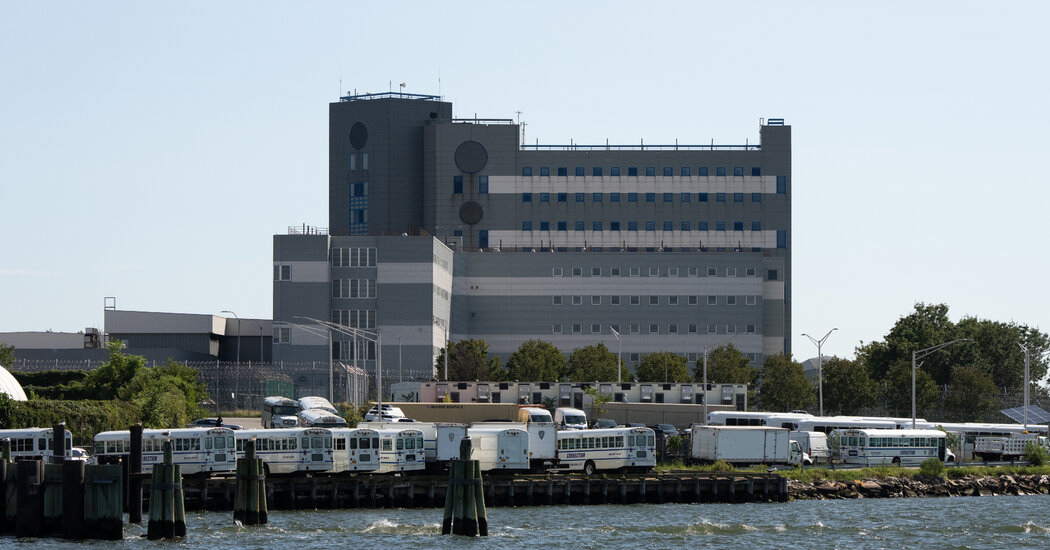 
Gov. Kathy Hochul and Mayor Bill de Blasio on Wednesday announced that women and transgender people held at the Rikers Island jail complex will be transferred to two state prisons 40 miles north of New York City, in the latest effort to stem a crisis that has engulfed the correction system.

The move, which begins Monday, is intended to address an ongoing staffing shortage — roughly one in three jailers are not showing for work — by allowing the city to post guards from the women’s units in other, more chaotic parts of the complex.

It comes as pressure builds on state and federal officials to step in as the city struggles to restore order in Rikers, its largest jail compound, which has fallen into a state of danger and despair.

The transfers might allow women who have not received medical and mental health care at Rikers amid a shutdown of such services during the pandemic to access that care in the state prisons. But it also could make it more difficult for the detainees — a majority of whom are awaiting trial — to attend court hearings and meet with lawyers and family members who will now be at least an hour’s drive away from Manhattan.

“Their day-to-day life at the prison will be better,” said Zachary Katznelson, executive director of the Independent Commission on New York City Criminal Justice and Incarceration Reform, a research and advocacy organization. “But working out cases and having access to family and lawyers will be harder. This has to be a short-term move.”

Tina Luongo, the attorney in charge of the Legal Aid Society’s criminal defense practice, called the move “a bad idea,” saying Mr. de Blasio was abdicating his responsibility to address issues plaguing Rikers at the expense of the detained. “This is not going to help the staffing issues,” said Mx. Luongo, who added that transgender women, in particular, benefited from support at Rikers that did not exist in state prisons, including guard training related to the L.G.B.T.Q. community and more access to gender-affirming medical care.

Despite the staffing shortage, the Department of Correction said it would provide daily transportation from New York City to the state prisons for detainees’ family members.

In a statement on Wednesday, Ms. Hochul said the transfers, which will happen at a rate of about 20 per week, would make the Rikers jail compound safer until the city “can identify and implement a permanent solution that will bring justice to the situation at Rikers.”

About 230 people will be transferred from the Rose M. Singer Center on Rikers Island — an 800-bed facility for women and transgender people — to the Bedford Hills Correctional Facility and nearby Taconic Correctional Facility, potentially freeing up hundreds of guards to work in understaffed and unmanned housing areas throughout Rikers, according to the mayor and governor’s announcement and a person familiar with the plan.

Last month, more than a third of all jail officers either called in sick or simply failed to show up for duty. The result has been an increasingly dangerous situation for guards and incarcerated people alike. In some jails, detainees have had free rein, controlling who enters and leaves housing areas, and some jailers have stopped confiscating weapons and failed to intervene in hangings and other emergencies.

So far this year, 12 people have died in New York City’s jail system — the most since 2015 — including five suicides.

The transfer plan follows other efforts to reduce the population on Rikers. Last month, Ms. Hochul began releasing detainees under a new law known as the Less is More Act, which was aimed at reducing jail populations by freeing people accused of certain parole violations, like failing to report to a parole officer. Another 143 people being held on minor convictions and serving a year or less were also transferred from Rikers to state prisons last month.

New York City’s jail system holds more than 5,700 people on a given day, with a majority housed in eight jail buildings on Rikers Island. Most of those at Rikers are awaiting trial.

Responding to reports of widespread staff absenteeism, Mr. de Blasio signed an emergency order last month to suspend correction officers who did not show up for duty. So far, more than 100 officers have been suspended and at least five have quit, city officials said. More than 1,600 still have not shown up for work.