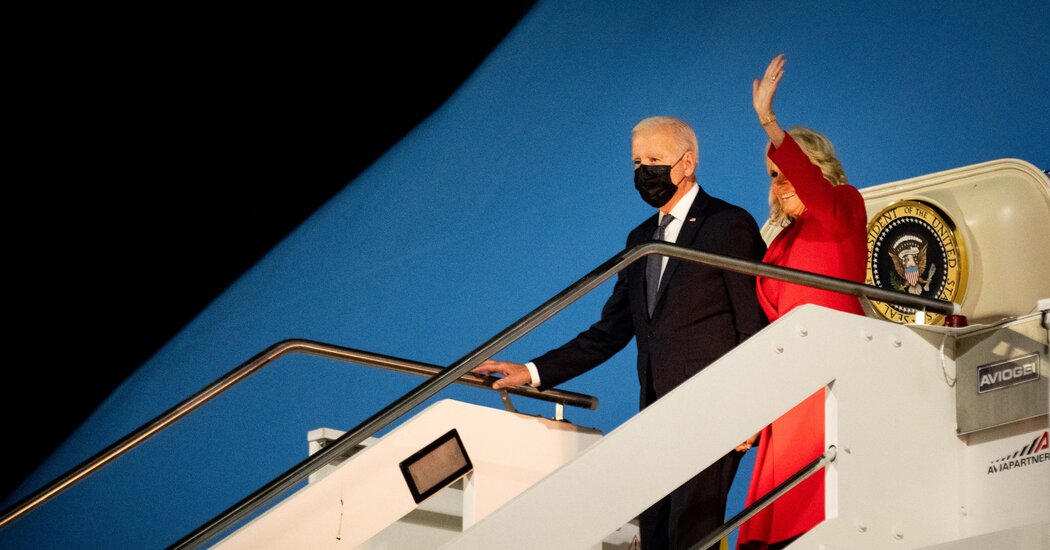 
With his domestic agenda in limbo as Congress continues to debate a $1.85 trillion economic and environmental spending bill and tensions with China and Russia smoldering in the backdrop, President Biden kicks off a whirlwind international tour on Friday in Rome, where he will meet with Pope Francis to discuss global challenges like the pandemic and climate change.

But that is just the prelude to a five-day diplomatic marathon that will be crucial not just for Mr. Biden, but also for the world. This weekend, at the Group of 20 summit of the world’s largest economies, leaders will gather amid a pandemic in which inequalities are increasingly raw and as supply chain woes and rising energy prices threaten economies worldwide.

After that, he and many of the same leaders head to Scotland for COP26, a worldwide summit on climate change that is billed by many as a make-or-break moment to save a warming planet from disaster.

For Mr. Biden, the events come against the backdrop of high-stakes negotiations over his domestic agenda. But participants to the summits from across the globe are all facing enormous challenges, many linked to the pandemic and the health and economic devastation it has wrought.

The agenda would be daunting even in normal times, but this is first G20 meeting in person since the virus emerged. Many of those who are coming hope to deliver concrete changes on issues like international tax shelters and getting coronavirus vaccines to the developing world, even as they struggle to make progress on existential issues like lowering carbon emissions and addressing energy shortages.

Two of the most consequential leaders — President Xi Jinping of China and President Vladimir V. Putin of Russia — are not expected at either the G20 or the climate summit in person, however.

Before the G20 begins on Saturday, Mr. Biden will already have a full schedule of delicate meetings.

Mr. Biden, a Catholic who rarely misses Mass, is scheduled to have an audience around midday Friday with Pope Francis, with whom he shares common ground on many issues, including climate change, social justice and economic inequality. Both have become targets of some conservative American bishops seeking to undercut them as political polarization in the United States has seeped deeply into its Roman Catholic church.

The meeting will be watched closely for any sign that the pope is providing Mr. Biden political cover from bishops trying to deny him communion and hurt him politically, but Francis has been careful to avoid entering into politics.

Still, that meeting promises to be easier than ones that Mr. Biden has planned for later in the day with European leaders who are wary of America’s commitment to allies in Europe as the United States pivots toward Asia to better compete with China.

He will meet President Emanuel Macron of France, who is livid with the administration after the United States cut a secret deal to provide Australia with nuclear-powered submarines — a deal that left France, which thought it had a multibillion-dollar agreement in the bag, empty-handed. Mr. Biden is expected to have some deliverables to smooth things over with Mr. Macron.

Between those two meetings, Mr. Biden will head to the Chigi Palace, the home of Italy’s prime minister, Mario Draghi. It is not just a polite drop-by. With Angela Merkel of Germany leaving the scene and Mr. Macron politically embattled, Mr. Draghi has emerged as a leader of Europe and a potentially key interlocutor for an American president looking to keep alliances strong on the continent.

Mr. Draghi, the former European Central Bank president who helped save the euro, is well known and respected in Washington, where he worked closely with the Obama administration during the debt crisis. He has often found himself allied with Mr. Macron on a raft of issues.

But he is less bullish on European independence than Mr. Macron, and having gravitated Italy’s foreign policy back toward the United States, would also make an influential close ally within the European Union for Mr. Biden.

ROME — In his public appearances, President Biden often briefly refers to an element of his upbringing in the Roman Catholic church, pausing to relay the guidance of his Irish Catholic mother, pull a quote from a hymn or extol the importance of keeping faith in difficult moments.

There are other parts of his faith that Mr. Biden — the most observant commander in chief in a generation, and someone who once considered joining the priesthood — keeps private. And on Friday, his meeting with Pope Francis will be one of them: While Mr. Biden was en route to Rome, the White House said their meeting, scheduled for around noon local time, would be held out of public view.

Privacy gives the two a chance to share a diplomatic visit that focuses on the personal. But a decision by the Vatican to cancel live footage of the meeting may also shield them from a storm of controversy among Catholics who have urged Francis to publicly admonish Mr. Biden for his belief that abortion rights should be upheld as legal.

Francis is the third pope Mr. Biden has met during his time in public office, beginning with John Paul II at the Vatican in 1980. As vice president, Mr. Biden met with Benedict XVI in 2011, telling him to “lighten up” on American nuns who were under fire for activism on poverty.

But it was Francis who asked to gather privately with Mr. Biden and his family before leaving Washington after a tour of the United States in 2015. The meeting came about five months after the death of Mr. Biden’s oldest son, Beau, and “provided us with more comfort that even he, I think, will understand,” Mr. Biden said at the time.

The two men, who are about five years apart, share significant similarities in their paths to leading two institutions that have become polarized from within. Both were passed over earlier in their lives, and both have reputations for shunning the perks of power: As archbishop of Buenos Aires, Francis was known for taking the bus instead of a limousine, and as a senator, Mr. Biden rode Amtrak to and from Delaware.

“They’re the regular guys,” said Kathleen Sprows Cummings, the director of the Cushwa Center for the Study of American Catholicism at the University of Notre Dame. “They don’t embrace the trappings of power, not only not embrace it, they both resist that. It may be generational, but I think it is a personality.”

Mr. Biden shares with the pope an approach to Christianity that is less focused on abortion and same-sex marriage and more on addressing poverty, climate change and racial inequality.

And while their similarities are undercut by a divide on issues like abortion and the plight of migrants, Francis has held warm meetings with other Catholics who favor abortion rights, including Speaker Nancy Pelosi, whom he hosted recently in his study. (The Vatican allowed that meeting to be recorded.)

“He’s reaching out to people that don’t agree with him 100 percent, whether they’re American politicians or cardinals in the church,” Mark K. Shriver, who wrote a book on Francis, said about the pope. Mr. Shriver, a nephew of John F. Kennedy, the first U.S. Catholic president, formed a group of Catholic Biden supporters during the campaign.

“He’s not banning them or sending them to Siberia,” Mr. Shriver added, “and he’s not doing that with Biden.”

VATICAN CITY — When Joseph R. Biden Jr. visits the Vatican on Friday, he will be the third American president Francis has met since becoming pope in 2013. Each has marked a distinct phase not only of his papacy, but also of the political upheaval in the United States and in its Roman Catholic church.

Now Mr. Biden, a devout Catholic, arrives at a moment when the political polarization in America has become woven into its Catholic church. And the president and pope have become common targets of powerful conservative American bishops seeking to undercut them.

Vatican officials and experts said they doubted that the antagonism of American bishops would come up in the private audience between Francis and Mr. Biden, and that they would instead talk about issues like addressing climate change, caring for the poor and ending the pandemic.

Francis is likely to press the president to ramp up coronavirus vaccine distribution to the developing world, and he rarely misses the chance to speak out against arms dealing and the consequences of war.

Yet factions left and right will be studying the meeting for any clue that the pope is providing political cover to the first Catholic American president since John F. Kennedy against the conservative culture warriors in their church.