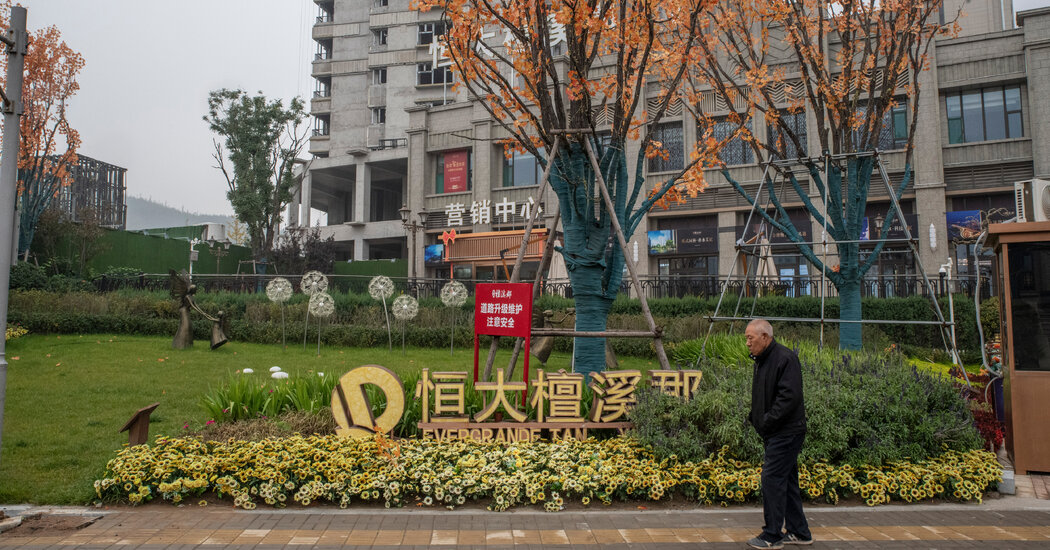 Now, the government is taking a more hands-on role.

Evergrande, the world’s most indebted property developer, said that officials from several state-backed institutions had joined a risk committee that will help the company to restructure itself. The committee, led by Evergrande’s founder, Xu Jiayin, will “play an important role in mitigating and eliminating future risks,” the company said in a filing late on Monday.

The formation of a committee with an apparent government imprimatur reassured investors who had worried about the potential impact, in China and beyond, of a chaotic Evergrande collapse. Its huge real estate empire includes millions of apartments in hundreds of Chinese cities, but Evergrande also has more than $300 billion in obligations it needs to pay back — and perhaps even more off the books.

“It looks like the government will intervene in some way to avoid a large crisis,” said George Yu, an economist at Renmin University in Beijing. “But the whole society should learn a lesson from this incident.”

Evergrande appeared to have missed payments to some of its bondholders of an affiliated company, Scenery Journey, that had been due on Monday. But its shares rose in Hong Kong trading on Tuesday as investors reacted to news of official backing for the company and broader measures to support an ailing property sector. Investors were also cheered by the Chinese government’s loosening of lending restrictions on Monday amid signs of broader economic slowdown.

Like other sprawling conglomerates before it that borrowed until they could no longer pay their bills, Evergrande’s future operations will now be advised, in part, by officials from Guangdong, the province where the company first began selling apartments to a fledgling Chinese middle class in the late 1990s.

Evergrande last week said it may no longer be able to meet its financial obligations. The disclosure came against the backdrop of a worsening property market and tough operating conditions for developers. At least 11 developers have defaulted on their bond payments this year.

Investors worried that Evergrande might be next. The grace period for payments on two of its bonds worth more than a combined $82 million expired on Monday. If bondholders were not made whole, it would mark the beginning of a formal default, something the company has managed to narrowly avert for several months. ClearStream, a trade-services provider, said on Tuesday that it was unable to process the payments on either bond because it had not received any money.

Evergrande did not respond to a request for comment.

Another distressed property giant, Kaisa Group, faced a potential default on Tuesday. Bondholders sent it a proposal that would give it more time, according to Bloomberg. Kaisa did not respond to requests for comment.

Authorities have been trying to rein in the reckless borrowing of corporate giants by pledging not to step in to save companies that can no longer pay their bills. Last year, officials turned their focus to property developers, among some of China Inc.’s biggest borrowers.

The central bank began by restricting bank lending to real estate companies and making access to new cash contingent on the ability of companies to start paying off their debts. With their traditional channels of financing drying up, and facing pressure from authorities to get their debt levels down, many developers found themselves in a tight spot. A slowing property market has made things worse and put strain on the entire sector.

In recent weeks, defaults in the property market have set off panic in the bond market, raising the cost of borrowing to record highs. Many developers have struggled to keep their operations running, to complete work on apartments they have sold and to pay their employees and contractors. China Central Television, the state-owned broadcaster, reported on Monday that Kaisa had failed to pay some of its workers for months and was having trouble finishing a luxury project in Guangzhou that was supposed to be delivered last year.

Evergrande’s call for help last week prompted a flurry of comments from China’s regulators assuring the market that its financial problems would not spill over into the broader economy. The Communist Party’s Politburo also weighed in to say that the government would help to support the property market.

Evergrande’s new risk committee will include top officials from China Cinda Asset Management, Guangdong Holdings, Guangzhou Yuexiu Holding, and Guosen Securities — entities that are either state-owned or backed. Evergrande said on Friday that it planned to “actively engage” with its foreign creditors.

One question now is whether investors in Evergrande’s U.S. dollar bonds will be willing to consider cutting a quick deal to roll over the company’s roughly $20 billion in unpaid bonds before the restructuring begins, or if they will chose to wait until the rest of the company’s more than $300 billion in debts are resolved.

Chinese authorities have made clear that social stability is crucial, indicating that they may put priority on the home buyers, suppliers and contractors still awaiting payment from Evergrande. And the company is on the hook for some 1.6 million uncompleted apartments that buyers have already paid for.

But officials advising the developer may also be concerned about how foreign investors are treated in the restructuring process, said Han Shen Lin, an assistant professor of practice in finance at N.Y.U.-Shanghai. Developers have become heavily dependent on access to international markets for funding. Over the next few months, they will need to make payments totaling some $17 billion, according to one estimate.

“While addressing social downside is a priority,” Mr. Lin said, “how the offshore U.S. dollar debt investors are treated will be an important signal of future China risk pricing.”