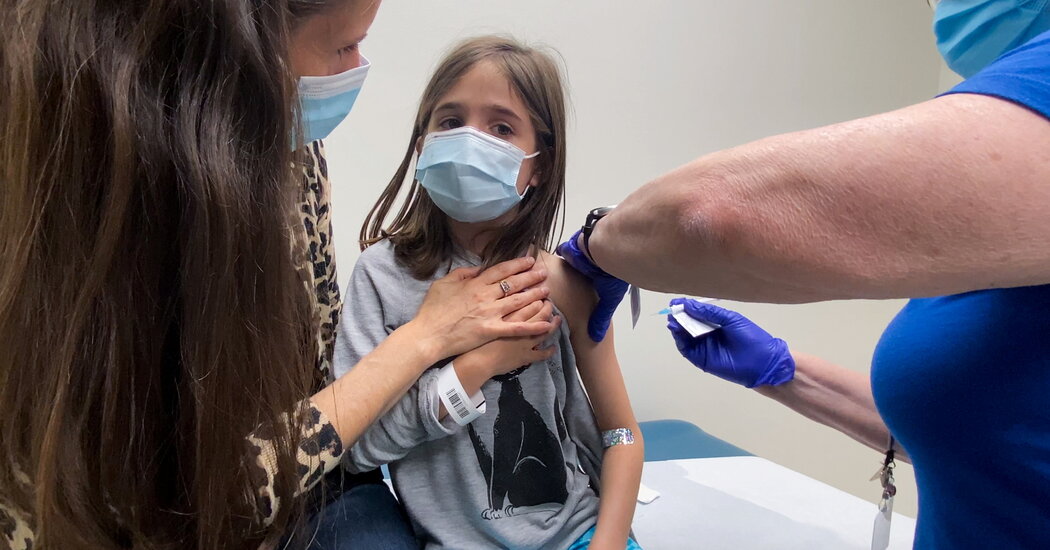 
Covid-19 vaccines could be approved and available for younger American children soon, but the question of how quickly parents will allow them to get inoculated is another matter.

That means those children could be fully immunized by the holidays, if an advisory panel to the Food and Drug Administration approves Pfizer’s application for vaccine use in that age group on Tuesday. Children 12 and up have been eligible for vaccination since May.

But hesitancy among parents of these children could be a hurdle. Only about one in three parents of 5- to 11-year-olds planned to get their children inoculated “right away” once a vaccine is authorized, according to polling by the Kaiser Family Foundation conducted last month. Another third said they wanted to “wait and see” how the vaccine affected children.

But that same polling showed that reluctance among parents of teenagers had dropped in the months since vaccines became available to that age group.

“This is critically important, and we know we have a lot of work to do,” Dr. Rochelle Walensky, the director of the Centers for Disease Control and Prevention, said on the NBC program “Meet the Press.” “Those survey data look very much consistent with where we were with adults last December, when we rolled out vaccines for adults. We have done a huge amount of hard work over the last 10 months, education, communication, providing information, getting vaccines to really convenient places and trusted messengers.”

F.D.A. regulators on Friday released their evaluation of data from the Pfizer-BioNTech submission for emergency authorization of a lower-dose vaccine for young children.

Pfizer’s data “look good as to the efficacy and safety,” Dr. Fauci said on the ABC program “This Week.” He said “if all goes well,” it is “entirely possible, if not very likely, that vaccines will be available for children from 5 to 11 within the first week or two of November.”

According to Pfizer and BioNTech, the children who were vaccinated as part of the clinical trial, who received doses that were one-third the size of the adult doses, developed robust immune responses after receiving the regimen of two shots three weeks apart. The companies have said the efficacy rate of the vaccine in children reduced the risk of developing a symptomatic infection by 91 percent.

The most common side effects in children were fatigue, headache, muscle pain and chills. According to the F.D.A., the data submitted indicated no cases of myocarditis, inflammation of the heart muscle, or pericarditis, inflammation of the outer lining of the heart, both of which are rare complications that have been reported among young boys and men receiving the vaccine.

Over the past week there has been a lot of regulatory guidance on who can receive booster doses of Covid vaccines, giving a large segment of the U.S. population access to more protection.

Both Dr. Walensky and Dr. Fauci sought to dispel confusion about booster shots and explain the option of “mixing and matching” initial vaccines and boosters.

Boosters of all three vaccines available in the United States have been authorized. Additional shots of the Pfizer and Moderna vaccines, which use mRNA technology, have been approved for people 65 and older, those with underlying health conditions and all adults whose living or working conditions place them at high risk of exposure to the virus. Anyone over 18 who received the single-dose Johnson & Johnson vaccine at least two months ago is also eligible for a booster.

People can receive a booster shot that is different from the initial vaccine they first received, the health authorities said.

“If you were originally vaccinated with one product, could you and would it be appropriate and safe and effective to get boosted in the third shot for the mRNA and the second shot for J.&.J. by another product?” Dr. Fauci said. “The answer is, it’s perfectly fine.”

Australia, home to the world’s longest lockdown, is scrapping quarantine requirements for vaccinated residents returning from overseas. New Zealand, famed for its commitment to a “Zero Covid” strategy, abandoned it this month. Around the world, people are vacationing, visiting family and resuming business trips across international borders.

The country where the coronavirus pandemic began is also the only one in the world still trying to completely eradicate the virus within its borders. Officials have repeatedly dismissed the idea of living with the virus, citing China’s large population and their success in containment so far — even as the country has continued to record sporadic outbreaks, triggering mass testing and strict lockdowns.

“Every locality should firmly adhere to the policy of ‘Defend externally against importation, defend internally against rebound,’” Mi Feng, a spokesman for the National Health Commission, said at a news conference on Sunday. “The current control measures cannot be relaxed.”

China has continued to record local cases — around 130 in recent days, after a spate of cases linked to domestic tourists. Parts of Beijing, Inner Mongolia and Gansu Province are under lockdown. Schools and businesses in those areas of Beijing are closed, and organizers of the Beijing Marathon, which had been planned for this weekend, announced on Sunday that it would be indefinitely postponed.

China’s tough stance on loosening Covid restrictions is possible in part because of China’s huge domestic consumer base, which has helped to keep retail spending afloat, and because of the ruling Communist Party’s tight grip on power. The authorities can implement lockdowns and mandate multiple rounds of testing with astonishing efficiency.

In addition, many Chinese are satisfied with the government’s approach. Domestic travel has surged in areas with no cases, and the country’s low death rate — it has officially recorded fewer than 5,000 deaths — has become a source of nationalistic pride, especially at a time when China’s relations with many other countries are growing increasingly fraught.

Xi Jinping, China’s leader, has repeatedly pointed to China’s success in containment as proof of the superiority of its governance model. When Zhang Wenhong, a prominent virologist, suggested this summer that China learn to live with the virus, he was attacked viciously online as a lackey of foreigners

There is a clear incentive for China to remain closed off, at least in the short term: With Beijing set to host the Winter Olympics in February, officials have acknowledged that they are under pressure to keep cases under control.

Still, the question of sustainability looms. China’s economic growth is slowing. The country’s diplomatic efforts may also suffer from its long isolation; Mr. Xi has not left China or received foreign visitors since early 2020, even as other world leaders prepare to gather in Rome for a Group of 20 summit and in Glasgow for climate talks.

Some officials have started to tentatively broach the idea of loosening restrictions, though without any timelines or firm commitments. Zhong Nanshan, one of the country’s most prominent doctors, told a Chinese magazine this month that China could begin opening up when vaccination rates had exceeded 85 percent, a goal that could potentially be reached this year.

But, he added, there was another caveat: Other countries would also need to get cases under control.

The singer Ed Sheeran announced Sunday on social media that he had tested positive for the coronavirus and would be canceling public appearances and working at home, in quarantine.

It wasn’t immediately clear what appearances would be canceled or rescheduled, or whether Mr. Sheeran was sick with symptoms of Covid-19.

And it comes just after Mr. Sheeran had been announced as the musical guest for “Saturday Night Live” on Nov. 6.

The four-time Grammy winner took a break from work and social media in late 2019 after two years of touring in support of his best-selling album “÷” (or “divide”).

Ed Sheeran reveals he has tested positive for COVID-19 and will be self-isolating:

“I’m now unable to plough ahead with any in person commitments for now, so i’ll be doing as many of my planned interviews/performances from my house.” pic.twitter.com/7SB8vfAoG7