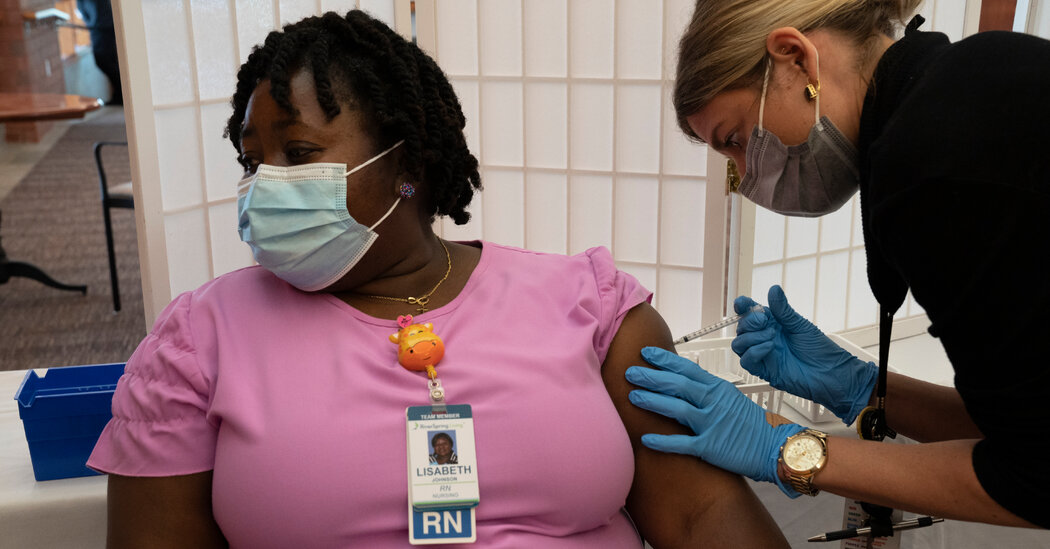 Thousands of health care workers in New York got inoculated against Covid-19 ahead of Monday’s deadline, helping the state avoid a worst-case scenario of staffing shortages at hospitals and nursing homes.

Health officials across the state reported that employees had rushed to get vaccinated before Monday, avoiding being suspended or getting fired. New York has 600,000 health care workers.

Statewide, the vaccination rate for hospital employees rose by Monday night to 92 percent of workers having received at least one dose, according to preliminary data from the governor’s office. The rate for nursing homes also jumped to 92 percent on Monday, from 84 percent five days earlier.

In the New York City public hospital system, more than 8,000 workers were unvaccinated a week ago. But by Monday morning that number had dropped to 5,000 — just over 10 percent of the work force. Although those unvaccinated employees were not permitted to work, city officials said that they felt they could manage the gaps.

In Rochester, officials at Strong Memorial Hospital placed a two-week pause on scheduling elective procedures and warned patients to expect longer wait times for routine appointments as the deadline loomed last week. But on Monday they said that they had been able to bring up their staff vaccination rate to 95.5 percent, from 92 percent last week, meaning that fewer than 300 employees out of 16,000 will be fired if they don’t relent.

“Some are still very scared,” said Kathleen Parrinello, the hospital’s chief operating officer. “So they need hand-holding and reassurance.” Other employees, she said, had told her that they were not convinced that they should get vaccinated but also did not want to lose their jobs.

Opposition to the mandate remains strong, despite the 11th-hour vaccinations. At least eight lawsuits challenging it have been filed, some based on First Amendment grounds and others arguing that the state should recognize immunity from prior infection as equivalent protection. In one federal case, health care workers are demanding that the state allow religious exemptions.

The Delta variant was the main reason that people decided to get vaccinated against Covid-19 this summer and why most say they will get boosters when eligible, according to the latest monthly survey on vaccine attitudes by the Kaiser Family Foundation, released on Tuesday morning. But the survey indicated that nearly three-quarters of unvaccinated Americans view boosters very differently, saying that the need for them shows that the vaccines are not working.

Another takeaway from the Kaiser Family Foundation survey: For all the carrots dangled to induce hesitant people to get Covid shots — cash, doughnuts, racetrack privileges — more credit for the recent rise in vaccination goes to the stick. Almost 40 percent of newly inoculated people said that they had sought the vaccines because of the increase in Covid cases, with more than a third saying that they had become alarmed by overcrowding in local hospitals and rising death rates.

“When a theoretical threat becomes a clear and present danger, people are more likely to act to protect themselves and their loved ones,” said Drew Altman, the Kaiser Family Foundation’s chief executive.

The nationally representative survey of 1,519 people was conducted from Sept. 13-22 — during a time of surging Covid deaths, but before the government authorized boosters for millions of high-risk people who had received the Pfizer-BioNTech shot, including those 65 and over and adults of any age whose job puts them at high risk of infection.

Sweeteners did have some role in getting shots in arms. One-third of respondents said that they had gotten vaccinated to travel or attend events where the shots were required.

Two reasons often cited as important for motivating those hesitant to get a vaccine — employer mandates (about 20 percent) and full federal approval for the Pfizer-BioNTech vaccine (15 percent) — carried less sway.

Seventy-two percent of adults in the survey said that they were at least partly vaccinated, up from 67 percent in late July. The latest numbers from the Centers for Disease Control and Prevention are even higher, reporting 77 percent of the adult population in the United States with at least one shot. The sharpest change in this month was in vaccination rates for Latinos: a jump of 12 percentage points since late July, to 73 percent, in the number of Latino adults who had received at least one shot.

With the vaccination racial gap narrowing, the political divide has, by far, become the widest, with 90 percent of Democrats saying that they have gotten at least one dose, compared with 58 percent of Republicans.

Perhaps reflecting pandemic fatigue, about eight in 10 adults said that they believed Covid was now a permanent fixture of the health landscape. Just 14 percent said that they thought “it will be largely eliminated in the U.S., like polio.”

Japan is ending its state-of-emergency measures on Thursday amid a fall in the number of new daily coronavirus cases and a vaccine rollout that has reached nearly 60 percent of the population, hoping that the move helps to revive the country’s economy.

It will be the first time since April 4 that no part of Japan is under a state of emergency.

The move was announced by Prime Minister Yoshihide Suga on Tuesday, a day before a Liberal Democratic Party vote that will select a leader to succeed him. Mr. Suga said that he would not be extending the emergency measures currently active in 19 prefectures and that they would instead expire at the end of the month, as scheduled.

“Moving forward, we will continue to put the highest priority on the lives and livelihoods of the people,” Mr. Suga said in Parliament on Tuesday afternoon.

He said that the government would “work to continue to achieve both infection control and the recovery of daily life.”

New daily coronavirus cases in Japan have decreased 73 percent over the past two weeks, to an average of 2,378 a day, according to the Our World in Data project at the University of Oxford. And there has been a sharp improvement in Japan’s vaccine rollout, with close to 60 percent of the population fully inoculated, a rate that exceeds that of the United States and of many other countries around the Pacific Rim.

Under the state of emergency, people were urged to refrain from nonessential outings, and restaurants were asked to close by 8 p.m. and to not serve alcohol. The government plans to easing those restrictions in stages.

Yasutoshi Nishimura, a government minister who is leading Japan’s Covid-19 response, said that serving alcohol would be allowed but that “governors will decide on that appropriately, according to the region’s infection situation.”