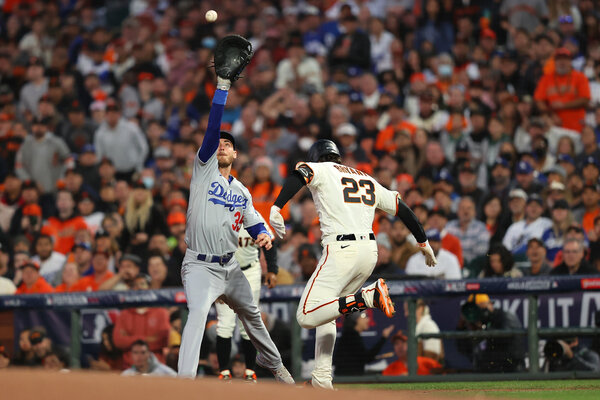 As most expected, Corey Knebel was out after just one inning in his “start” and was replaced to start the second inning by Brusdar Graterol. The big right-hander with the even bigger fastball got into a battle with Kris Bryant that ended up with Bryant shattering his bat for an infield single that Justin Turner fielded at third as part of Bryant’s bat flew past him.

The ice-cold Mike Yastrzemski, who is hitless for the entire series, popped out to the catcher in foul territory, but Wilmer Flores followed by fighting his way through a seven-pitch at-bat (five of them were 101 miles per hour or faster) to single on a liner to left.

With two men on and only one out, the Giants fizzled. Evan Longoria popped out in foul territory to first base and then pitcher Logan Webb ended things quietly by striking out on three pitches. Julio Urias, the original starter for this game, was shown warming up in the bullpen and will presumably be out for the bottom of the third inning.

This is what happens when a 100 MPH Brusdar Graterol sinker meets the handle of a bat at full force. The broken bat head sailed about 100 feet. pic.twitter.com/luJSfZmqBH

Logan Webb does not give you a lot to write about. That’s how the Giants like it.

A groundout to second (Will Smith). A groundout to shortstop (Justin Turner). A four-pitch strikeout where he caught the batter looking (Gavin Lux). End of inning.

Really good pitch calling by the Dodgers’ Will Smith behind the plate in the first inning. Corey Knebel was clearly amped up and was over-throwing his curveball, especially to Brandon Crawford. But Smith kept calling for it until Knebel gradually harnessed it. He ended up striking out Crawford with a particularly nasty one, and hopped off the mound.

It is impossible to say how long Dodgers pitcher Corey Knebel will be in this game, but he acquitted himself quite well, working around a double to pitch a scoreless inning.

Knebel started off by getting Tommy La Stella to fly out harmlessly to right. Darin Ruf followed La Stella by hitting the ball considerably harder, but having it end up in Mookie Betts’s glove just the same.

Catcher Buster Posey was the third straight batter to hit the ball to right, but his had enough mustard on it to ricochet off the wall, allowing him to walk into second for a double (trying for third off Betts’s cannon of an arm would have been … unwise). That brought up Brandon Crawford, who struck out on seven pitches to end the threat.

The Dodgers got a leadoff hit against Logan Webb but ended up with nothing to show for it.

After Webb fell behind in the count, 3-1, to Mookie Betts, the Dodgers’ leadoff batter singled sharply to left. With the infield shifted for the left-handed Corey Seager to pull, he hit the ball the opposite way, but it was hit in the air and Darin Ruf caught it easily for the first out of the inning. Then Trea Turner did Webb a huge favor, grounding into an inning-ending 4-3 double play.

Game 5 is officially underway with Logan Webb of the Giants delivering a 94-mile-per-hour sinker to Mookie Betts for ball one.

Dodgers Manager Dave Roberts confirmed in a on-field interview that left-hander Julio Urias will enter the game at some point and that the switch in starting pitcher was intended to combat the Giants’ ability to stack the lineup.

It is all hands on deck in San Francisco with Barry Bonds in the house to support the Giants.

SAN FRANCISCO — The Dodgers’ late decision to use reliever Corey Knebel as an opener, and the status of Giants second baseman Tommy La Stella’s tender Achilles tendon, caused San Francisco to delay finalizing a lineup until 90 minutes before Game 5.

The upshot: La Stella’s ankle tested fine during batting practice so he is leading off and playing second base. The Giants had planned to start the right-handed Donovan Solano at second base against the lefty Julio Urias. Instead, Solano likely will appear later. They kept right-hander Darin Ruf in the lineup batting second and playing left field and sprinkled three lefty bats throughout: La Stella, Brandon Crawford (hitting fourth and playing shortstop) and Mike Yastrzemski (sixth and playing right field).

When Urias started Game 2, the Giants stacked their lineup with right-handers against him. Crawford was the only lefty to start, and he batted sixth. The first five hitters against Urias that day were all right-handed: Ruf, Kris Bryant, Austin Slater, Buster Posey and Wilmer Flores.

“It’s understandable,” Kapler said of the Dodgers’ late pitching decision. “I don’t think it was unexpected. It certainly changes the way we were thinking about today’s game, but nothing out of the ordinary.”

SAN FRANCISCO — The Dodgers’ other lineup change, the one not involving an opener and erstwhile starter Julio Urias, was telegraphed by Manager Dave Roberts after Game 4 and could be a game-changer.

Gavin Lux, a 23-year-old rookie, is batting sixth and starting in center field. He reached base in all four plate appearances in Game 4 (two singles, two walks, one run scored). It was Lux’s first start following pinch-hit appearances each of the first three games.

When the Giants’ rookie right-hander Logan Webb dominated the Dodgers in Game 1, Lux tapped a bouncer back to Webb during a pinch-hitting appearance in the eighth inning. For his career, Lux is 1 for 5 with a double and a strikeout against Webb, who will start Thursday.

The Dodgers’ 1-0 Game 3 loss in windy Dodger Stadium ended with Lux smashing a fly ball into left field that both teams thought was going over the fence. Lux scorched the ball at 106.9 miles per hour and the game seemed to be headed for extra innings.

Lux couldn’t believe the wind got him that dramatically, either, and his reaction boomeranged around social media overnight.

“Scrolling through Twitter, there’s a lot of memes going around,” Lux said. “And I feel like everybody makes a meme of me anyways as it is because of all the facial reactions I have. But that’s just how I am.”

Tonight, Lux will be in the field instead of on the bench.

“I just love the heartbeat, the composure,” Roberts said after Game 4. “Just watching him take at-bats, it’s like a guy that’s played in the postseason much more than he has.” Roberts added that how Lux conducted himself in that setting “is very telling.”

SAN FRANCISCO — The Dodgers’ Hall of Fame broadcaster Vin Scully is retired (sadly) and not with the team, but that didn’t stop him from tweeting that he thinks tonight’s Game 5 is “the most important game” in the history of the Dodgers and Giants’ rivalry.

“Now I feel pressure,” Dodgers Manager Dave Roberts quipped when Scully’s tweet was passed on to him. “Gosh darn it, Vin.”

On a serious note, Roberts added: “For Vin to say that, no one knows this rivalry better than he does, so it just gives you the gravity of this, what it means. And it’s bigger than just one game and that’s what’s beautiful about this rivalry, sports in general. So we’re going to enjoy it. It’s going to be fun.”

A 107-win team vs. a 106-win team. They have 109 each when accounting for postseason games. Rivals for 133 seasons, connected not just by their origins in New York but also through their pioneering roles in moving west. Just the fifth instance in baseball history where teams with 100 or more wins each will be facing off in a winner-take-all postseason game.

It is hard to get much bigger than this.

SAN FRANCISCO — The Dodgers’ Julio Urias is about as established as a starting pitcher can be. He made 32 starts this season, without a relief appearance, and went 20-3 with a 2.96 E.R.A. Then he started and beat the Giants in Game 2 of this division series.

Yet his team decided — “from the tippy top of the Dodgers organization on down,” said Manager Dave Roberts — that Urias, 25, was not the best option to start the winner-take-all Game 5. They’ll go with an opener, Corey Knebel.

“Doesn’t mean it’s riskier, it’s different,” said Roberts, who texted Giants Manager Gabe Kapler last night to let him know. “But it does open up for potential criticism, which I’m imagining is already out there.”

He’s right about that; this certainly seems like a classic case of a very smart organization outsmarting itself. Roberts said Urias was the only starter he would use this way, based on Urias’s track record of being flexible — he has come out of the bullpen for 15 of his 19 career postseason appearances, and closed out the N.L.C.S. and World Series last fall.

Knebel, a former All-Star closer with Milwaukee, has done well in four tries as an opener, allowing one earned run in five and two-thirds innings. He’s a righty and Urias is a lefty.

“The Giants have been a tremendous ball club all year, and just speaking to the offensive side, they have been the best team in baseball as far as getting matchup advantages, platoon advantages,” Roberts said, adding that the strategy should help in “potentially giving us some matchups going forward throughout the game.”

Roberts and the Dodgers’ front office know their team much better than any fan or member of the news media. But it’s still jarring to see, and I asked Roberts about the downside of simply letting Urias start, as usual.

“There’s downside in him starting, if he were to start the game, because you could look at familiarity,” Roberts said. “He just faced this team five days ago. Those guys stacking and setting the matchups that they want.

“There’s downside in doing it the way we chose to do this. Corey’s never started a playoff game. But I think that, ultimately, we trust both players can handle this.”

So there you have it. Related note: Today is the 56th anniversary of Game 7 of the 1965 World Series, when another Dodgers lefty, Sandy Koufax, started against the Minnesota Twins. Koufax fired a nine-inning shutout, on two days’ rest.

Baseball is endlessly fascinating, maybe today more than ever. But boy how times have changed.