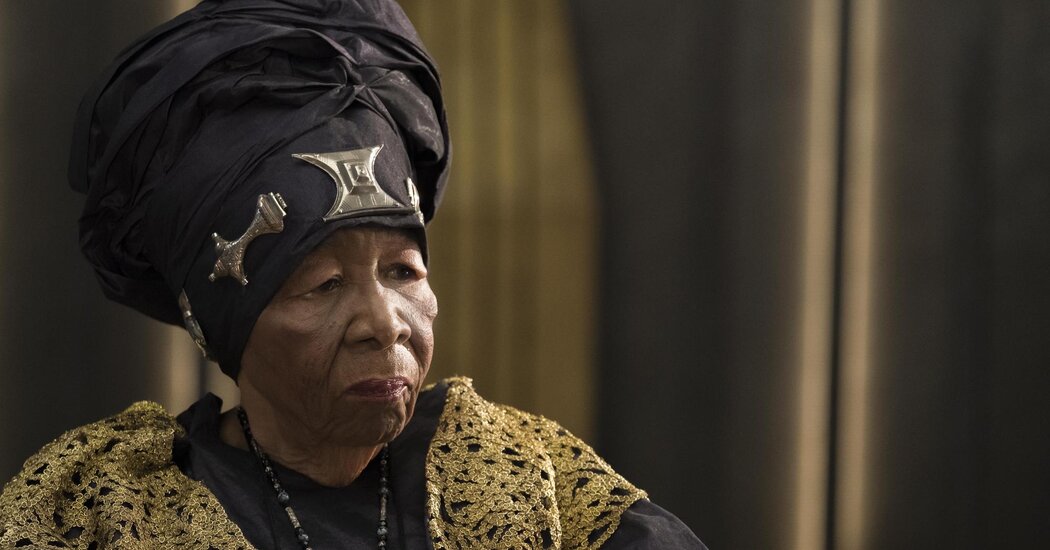 
Dorothy Steel was 90 and had been acting professionally for little more than a year when her agent asked her, in late 2016, if she wanted to audition for a role in “Black Panther,” the Marvel Studios film set in the fantastical African nation of Wakanda.

She was uncertain. So she said no.

“I said, ‘There is no way I’m going to be in no comic strip at my age,’” she recalled telling her agent, Cindy Butler, when she appeared on Steve Harvey’s television show in 2018. “But she’s very persistent. I have to give her credit. She said, ‘Miss Dorothy, you can do this.’”

She relented after getting an extra push from her grandson, Niles Wardell.

“She was on the fence about it,” Mr. Wardell said in a phone interview, “and when she brought it to my attention I said: ‘Grandma, you always talk about stepping out on faith and doing the things you love. This is your opportunity.’”

He added, “She wasn’t so much concerned that it was a comic-strip movie, but that the role was too big for her.”

Before she auditioned, Ms. Steel studied videos of Nelson Mandela on YouTube to help her develop a credible accent. She then auditioned on video for the role of a tribe leader, reading lines from the script. Ms. Butler emailed the video to Sara Finn, the film’s casting director, who quickly agreed to hire her.

“We found her late in the process,” Ms. Finn said by phone. “She was extraordinary. As soon as we saw her, we wanted her. She had an incredible spirit, warmth, humor and intelligence. We were thrilled to cast her.”

She was in a few scenes but said only one line, to T’Challa, the king of Wakanda and the movie’s title character, played by Chadwick Boseman: “Wakanda does not need a warrior right now. We need a king.”

Ms. Steel died on Oct. 14 in a hospital in Detroit at 95. She had completed most of her filming for the “Black Panther” sequel, “Black Panther: Wakanda Forever,” when she got sick. She was flown home by Marvel to Detroit, where she had been living for the last year.

Her grandson, her only immediate survivor, confirmed the death.

Dorothy May Steel was born on Feb. 23, 1926, in Flint, Mich. She worked for many years as a senior revenue officer for the Internal Revenue Service in Detroit. Her marriage to Warren Wardell ended with his death.

After retiring in 1984, she lived on St. Croix for 20 years before moving to Atlanta to be near her grandson and her son, Scott, who died in 2018.

Ms. Steel began acting in her 80s in the annual plays staged at the Frank Bailey Senior Center in Riverdale, Ga., a suburb of Atlanta. She had never acted before “and wanted to try something new to see if she could do it,” said Elaine Jackson, the former manager of the center, who wrote the plays, including one in which Ms. Steel played a teenager.

Ms. Butler said that while Ms. Steel was playing the voice of God in one of the plays, Greg Alan Williams, an actor and drama teacher, happened to be there and was impressed enough to offer her free lessons. Another student, a client of Ms. Butler’s, suggested that Ms. Steel sign with Ms. Butler.

“So she came in one day and I said, ‘Spend a day with me,’” Ms. Butler said. “After that meeting I had to sign her. She was going to work.” Within weeks, she had found work for Ms. Steel. It was her presence, Ms. Butler said, that brought her jobs.

“When she spoke, she spoke with authority,” she said. “Her voice was strong. And at her age, she was memorizing lines without a problem.”

Ms. Steel’s credits also include “Merry Christmas, Baby” (2016), a television movie; “Daisy Winters” (2017), a feature film; and four episodes of the prime-time soap opera “Saints & Sinners” in 2016, as well as a commercial for the South Carolina Lottery and a public service announcement for the DeKalb County Board of Health.

Acting provided her with a “protective cubicle,” Ms. Steel told The Washington Post in 2018. “You’re protected from the world,” she said. “And that’s the first time in my life I felt absolutely secure.”

On the set of “Black Panther,” she recalled, she became a grandmotherly presence to the cast, and each day she would get a hug and kiss from Mr. Boseman, who died in 2020.

“We were one big melting pot of Black people and we knew we were doing something special that had never been done before,” Ms. Steel told WSB-TV in Atlanta in 2018. “You know?”