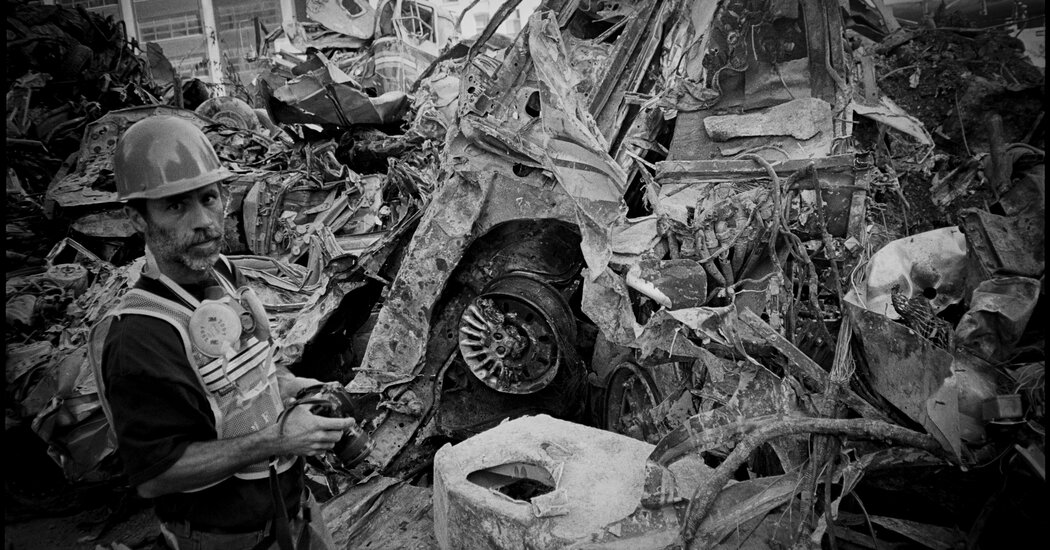 
Edward Keating, who for more than a month did whatever it took, even disguising himself as a worker, to photograph the wreckage at ground zero after Sept. 11, 2001, contributing to a body of work that brought The New York Times a Pulitzer Prize for photography for its 9/11 coverage, died on Sunday in Manhattan. He was 65.

His wife, Carrie Keating, said the cause was cancer, which Mr. Keating had attributed to the days and nights he spent inhaling toxic dust amid the ruins of the World Trade Center.

Mr. Keating’s enterprising spirit as a photographer sometimes got him in trouble. In the 1990s, while covering the Kosovo war, he was seized by the Serbian authorities after crossing the Albanian border to get a better angle. His efforts to gain access to ground zero led to his arrest for criminal trespass.

And as a freelancer for The Times covering racial violence in the Crown Heights section of Brooklyn in 1991, he was beaten by a group of men wielding pipes and bats. The Times’s executive editor at the time, Max Frankel, sent him a fruit basket. Two months later, the paper gave Mr. Keating a full-time job.

Mr. Keating could be unflinching in his work, photographing people using hard drugs, for example. But he could also be sensitive, capturing intimate moments between couples at a bar or at the Metropolitan Opera.

He liked to juxtapose harshness and delicacy. There was his portrait of a bodybuilder, his bulging biceps as big as his head, lying on a bed’s red floral blanket. And there was his close-up of a tea set, fully intact but encrusted in ash, in an apartment opposite where one of the Twin Towers had stood. It was among the photos that earned The Times the Pulitzer for breaking news photography.

Howell Raines, The Times executive editor who oversaw the 9/11 coverage, told Matt Lauer of the “Today” show that the tea set picture was “the iconic image” of New York after the terrorist attacks.

With his hand-rolled cigarettes, typical stubble and a Leica slung around his neck, Mr. Keating could give off a roguish air. Some colleagues considered him “a talented if mercurial lensman who sometimes behaved like a hotdogger,” the journalist Lloyd Grove wrote in The Washington Post in 2003. Mr. Keating acknowledged to The Post that he had twice been suspended by The Times for infractions unrelated to his work. His photography led to a final dust-up with the paper.

In 2002, two photojournalists for other news outlets publicly complained that they had seen Mr. Keating stage a photograph of a boy aiming a toy gun in Lackawanna, N.Y., near Buffalo. Mr. Keating and a Times reporter were there to report on a group of local men whom the authorities described as an Al Qaeda terrorist cell. The boy, who was not related to the men, was photographed beside a sign advertising “Arabian Foods.”

The episode prompted a debate in the news media about journalistic ethics and a long editor’s note in The Times, which concluded that “the boy’s gesture had not been spontaneous” and that the photo violated the Times’s policy on journalistic integrity.

Mr. Keating soon left the paper. He told The Post that he had been “falsely accused of having set up a photograph.” But he also acknowledged that he might have influenced the boy in the picture. “I prompt people to do things by planting a seed,” the trade publication Photo District News quoted him as saying, “otherwise I’m subject to what they do randomly. It’s part of the craft.”

Edward Nicholas Keating Jr. was born on March 4, 1956, in Greenwich, Conn. His father was an executive with the rubber manufacturer B.F. Goodrich; his mother, Gloria (Haupt) Keating, was a homemaker and amateur photographer.

Eddie was a boy when Edward Sr. died of a heart attack and a teenager when his mother killed herself. By the time he graduated from New Canaan High School in Connecticut, the task of raising him and his two younger brothers had fallen to his sister, Cynthia McClanaghan, who was in her early 20s and newly married.

Mr. Keating attended American University in Washington but “burned out” after three alcoholic years there, he once told the magazine Martha’s Vineyard Arts & Ideas. He got sober on Sept. 25, 1977, and never had another drink, he said.

He gave college another try at Columbia University, but a $400 tax break inspired him to try a different path. He bought a 35-millimeter Ricoh camera and started teaching himself photography.

He married Carrie Boretz, a fellow photographer, in 1988. In addition to his wife, Mr. Keating is survived by two daughters, Caitlin and Emily Keating; his sister; and his brothers, Kevin and Robert. He died at Memorial Sloan Kettering Cancer Center and lived on the Upper West Side of Manhattan.

After leaving The Times, Mr. Keating spent 15 years working on “Main Street: The Lost Dream of Route 66,” a photography book about one of America’s most storied roads. As a young man, he had reached “rock bottom” in a cheap hotel along Route 66 and “experienced the epiphany of total defeat,” he wrote in the book. That was when he quit drinking.

“The damnable highway that nearly ruined me,” he added, “somehow saved me.”