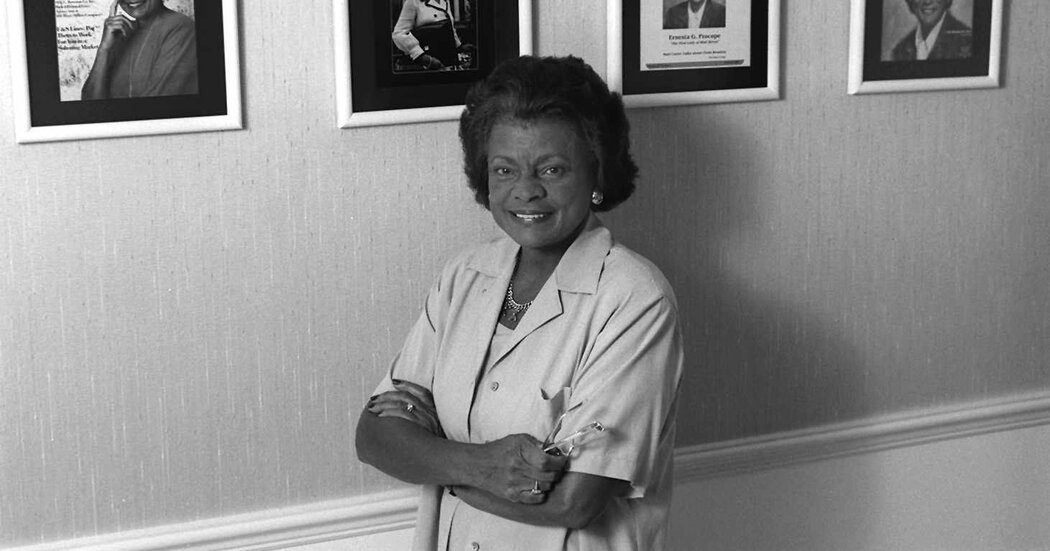 
Ernesta G. Procope, who transformed a storefront insurance brokerage in Brooklyn into what was billed as the nation’s largest insurance agency owned by a Black woman, with headquarters on Wall Street, died on Nov. 30 at her home in Queens. She was 98.

Her death was confirmed by her brother-in-law, Frederick O. Terrell. His wife, Jonelle Procope, who was the sister of Mrs. Procope’s late husband and who was mentored by her, is president and chief executive of the Apollo Theater in Harlem.

Mrs. Procope began brokering policies for local small businesses and homeowners when she opened her business, E.G. Bowman Co., in the early 1950s. Decades later, she was handling accounts for major commercial, institutional and nonprofit clients like Pepsico and other Fortune 500 corporations as well as the New York City Housing Authority.

Along the way, she fought to provide African Americans and people in poor areas with access to insurance. When major insurers were reluctant to underwrite policies in Bedford-Stuyvesant, a largely Black Brooklyn neighborhood that they considered marginal, Mrs. Procope’s firm hired limousines to ferry insurance executives there from Manhattan.

They “didn’t know that Bedford-Stuyvesant had substantial, middle-class homeowners — Blacks and whites — who needed and deserved coverage,” she told American Agent & Broker magazine.

When civil disorder later in the 1960s prompted insurers to deny insurance to homeowners in Bedford-Stuyvesant and other sections where Black and Hispanic people predominated, she helped persuade Gov. Nelson A. Rockefeller of New York and the state Legislature to ban redlining — the wholesale denial of coverage by neighborhood.

She also pressed the state to establish its Fair Access to Insurance Requirements plan for homeowners in high-risk areas who would otherwise have been denied standard policies. It was a model for similar programs in other states.

Mrs. Procope arrived on Wall Street in 1979, and her firm became one of the first major Black-owned businesses there. It described itself as the largest Black-owned insurance brokerage in the United States.

“Here was a Black company from Bedford-Stuyvesant coming to Wall Street — that was significant,” she said in the magazine interview. “It showed that we had entered the mainstream of the American economy, and it opened doors for other Blacks.”

She also founded Bowman Specialty Services, an outfit that provided engineering and safety assistance for the construction of the United States portion of the Alaska pipeline. And she was named to corporate boards and as a trustee of Cornell and Adelphi universities.

Mrs. Procope’s reputation fell under a cloud when she, along with 17 other members of Adelphi’s trustees, were removed by the state Board of Regents in 1997 for failing to properly oversee spending by the university’s president. As chairwoman of the trustees, she was also accused of conflict of interest for handling the university’s insurance through her brokerage. She denied wrongdoing, contending that her company provided Adelphi free consulting, saved it money and provided superior service.

Ernesta Gertrude Forster was born on Feb. 9, 1923, in Brooklyn and was raised in Bedford-Stuyvesant. Her father, Clarence Forster, was born in Barbados and became a chief steward for Cunard Lines. He later owned real estate and was a postal worker. Her mother, Elvira (Lord) Forster, a homemaker, was born in St. Lucia, in the British West Indies. Her father was a son of Sam Lord, a notorious Barbadian buccaneer who died in 1844, relatives said.

Ernesta was a talented pianist who performed in a recital with other children at Carnegie Hall when she was 13. She graduated from the High School of Music and Art (now the Fiorello H. LaGuardia High School of Music & Art and Performing Arts) in Manhattan. Enrolling at Brooklyn College, she left after a year to marry Albin Bowman and handle the insurance for his real estate business. She also studied at the Pohs Institute of Insurance.

After Mr. Bowman died in 1952, she founded E.G. Bowman the following year.

She married John L. Procope, an advertising executive, whom she had met on a blind date, in 1953. He became publisher of The Amsterdam News and remained in the position until 1982, when he joined E.G. Bowman as chairman.

Mrs. Procope and her husband were active in political and philanthropic circles. In 1972, she received the Woman of the Year award from Pat Nixon, the first lady, in a White House ceremony. President Gerald R. Ford later appointed her special ambassador to Gambia. Ernst & Young named her Entrepreneur of the Year in 1993.

Mrs. Procope retired in 2016. Her company remains in business.