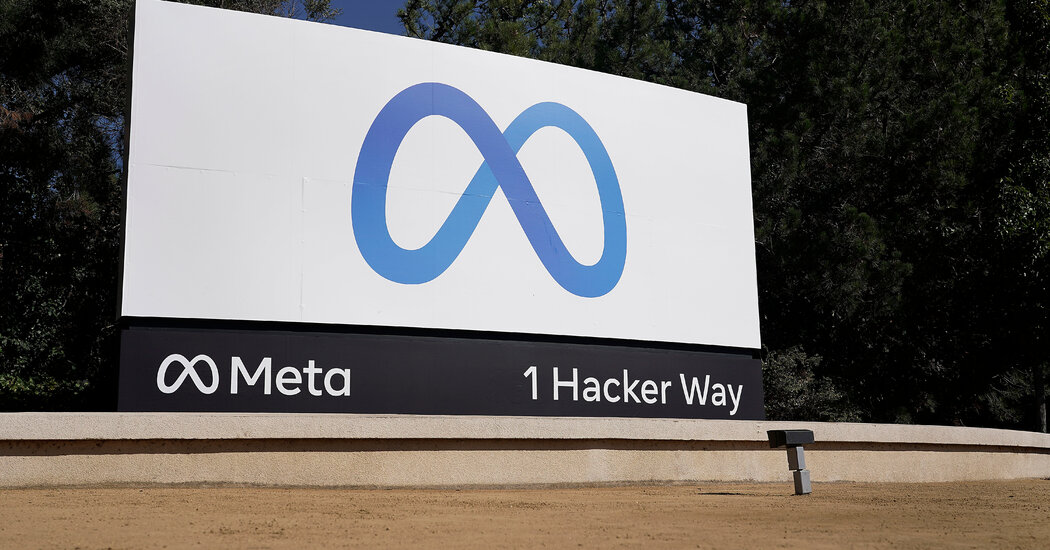 Yesterday, Facebook announced it would rebrand itself as Meta. The company will begin trading under the ticker MVRS on Dec. 1. It’s a clear move by the founder Mark Zuckerberg to de-emphasize the company’s most successful product and reorient itself around a vision of a virtual-reality enabled future that Meta’s own executives admit, based on today’s technology, can’t yet exist.

It also comes as Zuckerberg and his company are under intense scrutiny over leaked documents that show the company was aware of the societal damage its products have caused. Some say the name change is an effort to leave behind what is wrong with Facebook without making substantial changes. DealBook turned to our colleague Shira Ovide, the writer of The Times’s newsletter On Tech, for her thoughts on the meaning of Meta.

I can understand what Mark Zuckerberg is trying to do, and it’s not just window dressing. There are three good things the name change does for him and his company:

I am reluctant to say that Zuckerberg’s vision of the future, where we all learn and shop and live in some virtual world that Facebook controls, is not going to happen. Can Facebook will it into being? Maybe. Zuckerberg has been right about the future before. Is it a good thing for the world if he is right and this is a thing that Facebook designs and controls? That’s another question.

Sign up here for the On Tech newsletter to hear more from Shira, three times a week.

Liberals deal President Biden’s agenda another setback. House progressives rejected a personal entreaty by Biden to pass a $1 trillion infrastructure bill. They wanted assurances — so far unforthcoming — that the moderate senators Joe Manchin and Kyrsten Sinema would back a separate $1.85 trillion social and climate spending bill that had already been whittled down from $3.5 trillion.

A day of disappointing tech-giant earnings. Amazon reported its slowest sales growth in nearly seven years, as a pandemic-fueled surge in online shopping abated, while Apple’s revenue fell short of expectations, as supply-chain shortages cost it $6 billion in sales. Both companies predicted little improvement in the near term, citing shortages of workers and components.

Citigroup mandates coronavirus vaccines. The bank became the first on Wall Street to require U.S. employees to get inoculated as a condition of employment, citing both Biden’s order requiring vaccinations for government contractors and the need to ensure employees’ health and safety. Meanwhile, New York City is bracing for a wave of unvaccinated workers being put on unpaid leave as an inoculation deadline looms.

Evergrande averts default for the second time. The debt-burdened Chinese property developer made an interest payment that was due on Sept. 29, just inside a 30-day grace period. But creditors say they’re still in the dark about what the company is up to.

Shell rejects Dan Loeb’s pitch to break itself up. Executives of the oil giant said during an earnings call yesterday that splitting itself into a legacy oil and gas company and a renewables producer didn’t make sense. Shell got help from one of its top shareholders, the investment firm Abrdn, which said Loeb’s proposal was unfeasible.

Among the provisions that made it into the president’s proposed $1.85 trillion spending plan is one of most pro-union pieces of legislation since the days of F.D.R. The proposal would allow automakers to offer a $4,500 tax credit, on top of other credits, to buyers of electric vehicles that are made in the U.S. with union labor. That excludes most foreign car manufacturers, who opposed the bill, because most do not use union labor at their American assembly plants.

The tax credit also excludes Tesla, the biggest maker of electric cars in the U.S. The relationship between Biden and Tesla’s Elon Musk has been icy. Musk said that he wasn’t invited to a recent White House meeting on electric vehicles, despite the fact that non-unionized Tesla, at least for now, is the most important player in the country’s electric car market. In the first half of the year, two-thirds of all new electric vehicles registered in the U.S. were Teslas.

Does it matter? Teslas are clearly popular, and investors believe they will stay that way: The company just became one of the few companies valued at more than $1 trillion. Would a $4,500 tax credit be enough to make a difference to sales of Tesla’s pricier models?

The provision raises important questions about policy priorities, which are playing out in many aspects of the president’s sweeping plans for infrastructure, the social safety net, the environment and more. Biden aims for half of new car sales to be electric by 2030, up from just 2 percent last year. Is the union-linked subsidy the right policy to achieve climate goals, or is it more about promoting certain kinds of jobs? Is it intended to support Detroit automakers or to create more competition for Tesla? All of the above?

— Representative Jim Jordan, Republican of Ohio, during a six-hour congressional hearing with the leaders of the four major oil companies.

The energy executives acknowledged that the ​​burning of their products was driving climate change, but also told lawmakers that fossil fuels were not about to disappear. Democrats hoped to put the C.E.O.s on the spot (under oath) about their companies’ role in global warming, while Republicans, like Jordan, questioned the premise of the hearing and said the executives should be thanked for providing energy to homes and businesses over the decades.

Around the world, stress has run high during the pandemic, and even workers known for their drive, like junior bankers, have ignited debates about burnout. As the economy recovers, companies are wrestling with how to attract and retain employees while maintaining productivity in a world upheaved.

DealBook spoke with Jennifer Moss, who is on the Global Happiness Council, a group of scientists and economists supporting the U.N.’s well-being goals, about her new book, “The Burnout Epidemic: The Rise of Chronic Stress and How We Can Fix It.” The interview has been edited and condensed.

A tech giant in trouble. The leak of internal documents by a former Facebook employee has provided an intimate look at the operations of the secretive social media company and renewed calls for better regulations of the company’s wide reach into the lives of its users.

The whistle-blower. During an interview with “60 Minutes” that aired Oct. 3, Frances Haugen, a Facebook product manager who left the company in May, revealed that she was responsible for the leak of those internal documents.

Ms. Haugen’s testimony in Congress. On Oct. 5, Ms. Haugen testified before a Senate subcommittee, saying that Facebook was willing to use hateful and harmful content on its site to keep users coming back. Facebook executives, including Mark Zuckerberg, called her accusations untrue.

We’re reacting to overwhelming circumstances, so we’re in constant fight-or-flight mode, and it taxes us. There are different sources causing this pressure — systemic issues, lack of fairness rooted in societal or organizational problems — and that is bigger than any individual. And then there is overwork, either by economic necessity or in environments where people are passionate and trying to prove themselves at all costs.

What is going on in the work force now?

Burnout is not new, but the pandemic has exacerbated it. People are exhausted and disengaged. They feel alienated. We’ve never seen a more cynical group of workers, and it’s across the spectrum. It’s true for essential workers — nurses, police and firefighters — and lawyers and investment bankers. And it’s manifesting in a mass exodus of employees.

Is burnout a personal problem?

No! It is a workplace problem. Managers play a huge role in operations and inefficiencies that create stress. That’s beginning to be understood. Before, employers wanted to keep people at work with perks — yoga, laundry, meals. But deep breathing won’t make people feel better if no one is paying attention to much more fundamental things like communication.

Is there a fix?

Societal solutions might be mandating paid leave or passing laws recognizing a worker’s right not to be online at all hours, as exists in France. At the organizational level, leaders are responsible and there are a lot of things they can do — check in, ask questions and recognize boundaries because inattention can lead to catastrophic impacts for everyone.

Best of the rest

We’d like your feedback! Please email thoughts and suggestions to dealbook@nytimes.com.