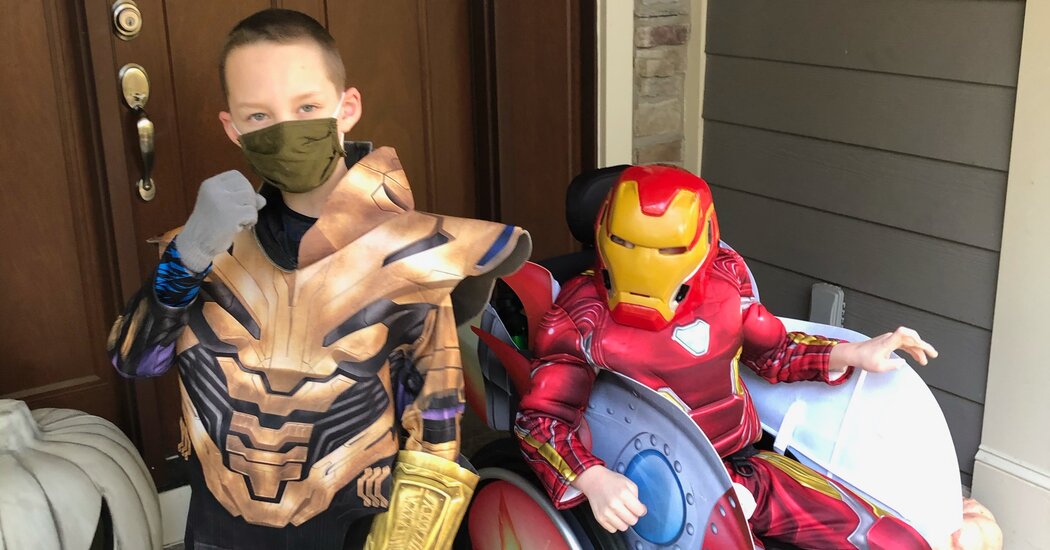 
Just five years ago, Jessica Bondi and Brian Steinberg couldn’t find a Halloween costume to accommodate their son Ben’s disability. Ben has cerebral palsy and has used a wheelchair since he was 3. Ms. Bondi saw photos of costumes that other parents of children with disabilities made, but she felt intimidated by the elaborate projects. Also, Ben is a twin. If he and his brother Nathan wanted to wear matching costumes, it was almost impossible to find them in stores.

Recently, Ms. Bondi has noticed adaptive costumes, which cater to people with disabilities or sensory issues, have become more accessible and affordable. Now 8, Ben can pick a superhero costume from Walmart, Target, Amazon or other large name-brand retailers and even get creative. This year, he is going to be a “samurai dragon,” with a ninja outfit for him and a dragon costume for his wheelchair.

“We’re making sure that everyone can transform for Halloween,” said Tara Hefter, a representative from Disguise Costumes, a leading manufacturer.

But many families still prefer the old fashioned approach — cardboard, glitter and a lot of elbow grease. We spoke to several families about their experiences finding adaptive costumes for their kids.

They found costumes for the whole family.

Finding the right Halloween costume for Julian Boose, a 6-year-old with Snijders Blok-Fisher syndrome, can be complicated. The rare genetic disorder means that Julian has significant cognitive impairments, and he refuses to wear certain clothes and fabrics, especially outfits with buttons, fringes, hoods and tags.

Julian is home-schooled and is largely separated from other kids his age. But with a little creativity, his mother Samantha Boose said Halloween has become one of the few nights a year when she sees him alongside his peers.

The whole family often creates group costumes that take into account Julian’s sensory issues. When they all dressed up as superheroes, Julian’s cape was hitched to the back of his pajama shirt with Velcro instead of an irritating tie around his neck. In 2020, they were all skeletons, but Julian’s pajama costume didn’t have a mask or hood, both of which would irritate him. This year, she found a zip-up fleece onesie spacesuit for Julian, with the rest of the family dressing in space-themed outfits.

He lights up the night.

Molly Molenaur said her 7-year-old son, Miles, relies on structure to put some steadiness in his life when so much can seem overwhelming or uncertain. He loves the comfort of a calendar, she said, and anticipating events. Halloween, however, has been challenging because Miles is DeafBlind, with limited vision and hearing. Television characters or superhero outfits don’t resonate with him, since he cannot watch them onscreen.

Instead, Ms. Molenaur turned her son into “Light Up Boy” last year, by sewing LED light strips into a zip-up onesie. Miles could tell when the lights dimmed and changed colors, flickering from blue to green to purple. He pumped his hand in the air, giddy and glowing, shining his way down the street.

A wheelchair transforms into a magical chariot.

On a whim, Laura Walker sent an application to the nonprofit Magic Wheelchair in 2017, but assumed she would never hear back. Her daughter, Kendall, has spina bifida, and the organization constructs and donates intricate costumes for children with disabilities.

The spooky season is upon us. Make the most of Halloween, safely, with some help from The Times.

Just two years later, the group replied and offered to make over then-8-year-old Kendall’s wheelchair with a “My Little Pony” theme — with Rainbow Dash and Pinkie Pie pulling her chair-turned-chariot down the street. “It was the best time my baby ever had,” Ms. Walker said.

Now 10, Kendall has outgrown her Pony obsession, Ms. Walker said; she’s more interested in dressing up like the Korean pop stars from Blackpink. Ms. Walker will paint the rims of her daughter’s current wheelchair bright neon colors for Halloween this year, so that they glimmer as she wheels around the local trunk-or-treat.

‘It makes the other kids almost want to be him.’

When Noelle and Quentin Delroy’s son Stellan got his first wheelchair, around the time he turned 5, they wondered how they would handle Halloween. The family combed their house for any materials — like moving boxes and Mr. Delroy’s drum kit — they could use in a makeshift costume for their son, who has cerebral palsy. Since then, they have spent each fall gearing up for their son’s Halloween costume, running back and forth to the craft store and spending nights tinkering in their garage with heaps of fabric and felt.

The effort is more than worth it, they said, because Halloween is something their son can “participate in all the way.” When Stellan goes to school in costume, “it makes the other kids almost want to be him,” Mr. Delroy said. At 9, he is nonverbal, but they can tell from his facial expressions how excited he is to see each costume. This year, Stellan will be a punk rocker with a cardboard drum set made to fit over his wheelchair.

Ayah Young’s 8-year-old son Coltrane was born with Joubert syndrome, a rare neurological disorder that kept him in and out of hospitals for the first years of his life. He used a wheelchair when he was younger, which became a challenge for Halloween costumes. So she used cardboard boxes and hot glue to make “boxtumes.” One year, he was Thomas the Tank Engine, another he was Marshall from “Paw Patrol.”

The highlight of the holiday may have been the reactions from other children who seemed genuinely jealous of Coltrane’s costumes, Ms. Young said. “Normally, kids don’t know what to make of it,” she said of his disability. “But on Halloween, they were like, ‘This is epic. This is the costume I wish I was in.’”

Coltrane does not currently use a wheelchair, but Ms. Young still creates his costumes, catering to his sensory issues. She focuses on what she called “pajama-based” outfits that are less itchy and don’t touch Coltrane’s ears. The costumes often take weeks to make — crafted a bit at a time, night by night, until she has a finished product. “Everyone deserves Halloween,” she said.

A father remembers his son’s joy.

On the morning of Halloween in 2019, Rich Kuehn’s son Jacob, a 4-year-old with cerebral palsy, came downstairs for breakfast and gasped. “That’s my police car!” he squealed. Mr. Kuehn had placed a sputtering toy siren by his family’s dining table to accompany a cardboard police car that could slide over Jacob’s wheelchair. When he thinks back on that Halloween, Mr. Kuehn doesn’t remember the trick-or-treating, but rather watching his son’s gleeful reaction to the siren.

These days, Mr. Kuehn plans Jacob’s Halloween costumes up to two months in advance. This year, Jacob wants to be a soldier, and Mr. Kuehn has been at work crafting a cardboard Army tank for Jacob’s wheelchair. While adaptive Halloween costumes are becoming more and more commonplace, he said, he still struggles to find creative options for Jacob and to plan his son’s costume on top of those for his 9-year-old and 12-year-old daughters. But he takes comfort in knowing he’s not the only parent figuring out how to modify the holiday.

“It’s amazing how many more families and kids like ours are out there,” he said.