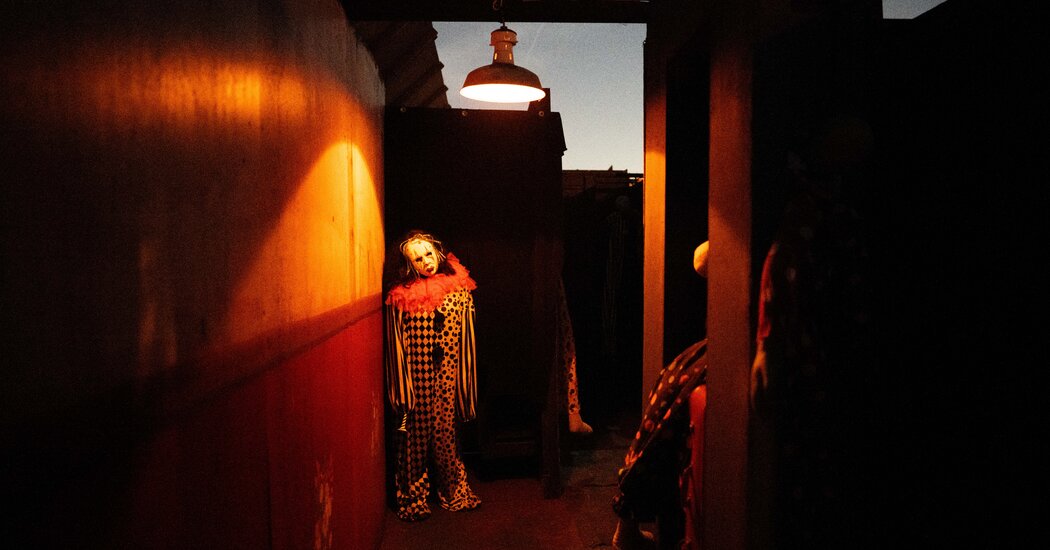 So this spring, he maxed out his line of credit at $200,000, bought the bed that shook as if possessed, bought the clown costumes stained with blood and added hundreds of other items to his online cart. Maybe that would draw crowds to his two haunted attractions in San Diego, businesses that have supported his family for more than three decades but that were shut down in 2020 by the pandemic.

“‘Devastating’ is a great word to describe the Halloween season last year,” said Mr. DeFatta, 61, the owner of The Haunted Hotel and The Haunted Trail of Balboa Park. “You know, it was scary, it was horrifying. And if we can just get through this year, we’ll be fine.”

That is the predicament this month for hundreds of haunted houses, a staple of the Halloween season and an attraction that embodies the financial struggles of small businesses across the United States as the economy limps toward recovery.

Consumer spending this Halloween season is expected to reach a record high of $10.1 billion, according to a survey from the National Retail Federation. An estimated 65 percent of Americans intend to celebrate this Halloween, up from 58 percent last year and nearing the 68 percent who said they would celebrate in 2019.

For haunted house owners and workers, the renewed excitement made possible through vaccinations is a hopeful sign that a strong spooky season this month can make up for last year’s lost revenue. Some say business is back to normal, while others have noticed that lines are not as packed as before.

Of those Americans who planned to celebrate Halloween this year, 18 percent said they would do so by visiting a haunted house, down from 22 percent in 2019, according to the National Retail Federation.

While most larger attractions have been able to reopen this year, some smaller operations that were devastated by the lack of revenue last year weren’t able to.

“We’re trying to bounce back this year,” said Amber Arnett-Bequeaith, the vice president of Full Moon Productions, which operates several haunted houses across the country, including The Edge of Hell, which was founded in 1975 in Kansas City, Mo., and is considered one of the oldest commercial haunted houses.

Mindful of the pandemic, some places are continuing to incorporate masks with their costumes or demanding that workers be vaccinated, Ms. Arnett-Bequeaith said.

“It’s a hard business,” she said. “Scaring people is not easy or cheap.”

Some of the larger haunts, she said, have spent well over a million dollars over the years as they try to keep up with an audience that is no longer content with strobe lights and skeletons.

Now, owners of large haunted attractions are seeking upscale props, such as animatronic demons, movie-like monster makeup and projectors that can display high-resolution zombies — all expensive features that can slim the profit margins or drive up ticket prices.

For those whose haunted houses are their sole source of income, the six-week season is, as ghoulish owners would say, do or die. This year, it’s even more critical.

“It’s a lot of anxiety,” said Michael Jubie, the owner of The Headless Horseman, a haunted house and hayride attraction in Ulster Park, N.Y.

Mr. Jubie said he lost about 75 percent of his income last year because he couldn’t operate at full capacity. The Headless Horseman used to employ 375 people. Now, it’s about 190. “It’ll take 10 years to recoup,” he said.

Tino Pascuzzi, who runs The Sanctuary Haunted Attraction in Oklahoma City, said his decision to close last year was devastating.

“When we close, there’s an entire ecosystem of workers that are affected,” Mr. Pascuzzi said.

The witches, nuns, Freddy Kruegers and demented doctors who terrify visitors are often hopeful actors and theater students from the nearest university. Then there are the security personnel, sanitation crews, marketers and vendors who provide the props.

The haunted attraction industry, with about 1,200 locations that charge admission, generates an estimated $300 million in revenue and spends about $85 million on advertising, according to America Haunts, an organization that collects data for the industry.

“It’s like 20 Broadway shows every night,” said Dwayne Sanburn, the owner of 13th Gate in Baton Rouge, La. Between Covid last year and Hurricane Ida this year, the attraction “really got hit,” he said. But profits this month were up about 20 percent compared with last year, he added.

“I think everyone’s ready for entertainment and ready to go out, and Halloween is perfect for that,” Mr. Sanburn said.

In recent weeks, some smaller haunted houses have also been crawling toward more financially stable ground.

Dan Hopkins, 71, opened the Hollis Haunted Chicken House in Heflin, Ala., about 18 years ago to raise money for the local fire department, the theme being a mutant chicken invasion that a farmer tries to control by enlisting the help of his friends, Jason from the “Friday the 13th” series and Leatherface from “The Texas Chainsaw Massacre.”

In the waiting room are real chickens, a metaphor, Mr. Hopkins said, for what people will become once stepping inside.

“We’re doing just as well as ever,” Mr. Hopkins said, adding that the attraction might net about $100,000 by Halloween.

It was those kinds of results that Mr. DeFatta was hoping for on a recent fall night as he stood outside The Haunted Hotel for its grand opening.

He paced around. He looked at his watch. Only a few hours until the creaky doors opened, and would people show up?

Finally, as the night darkened, the people arrived. More than 1,000, he tallied.

Mr. DeFatta listened to the whirring chain saws, the deep-voiced killers, the piercing screams of green-eyed clowns. He heard the people yell, heard them shout profanities and laugh and thank the heavens it was over.