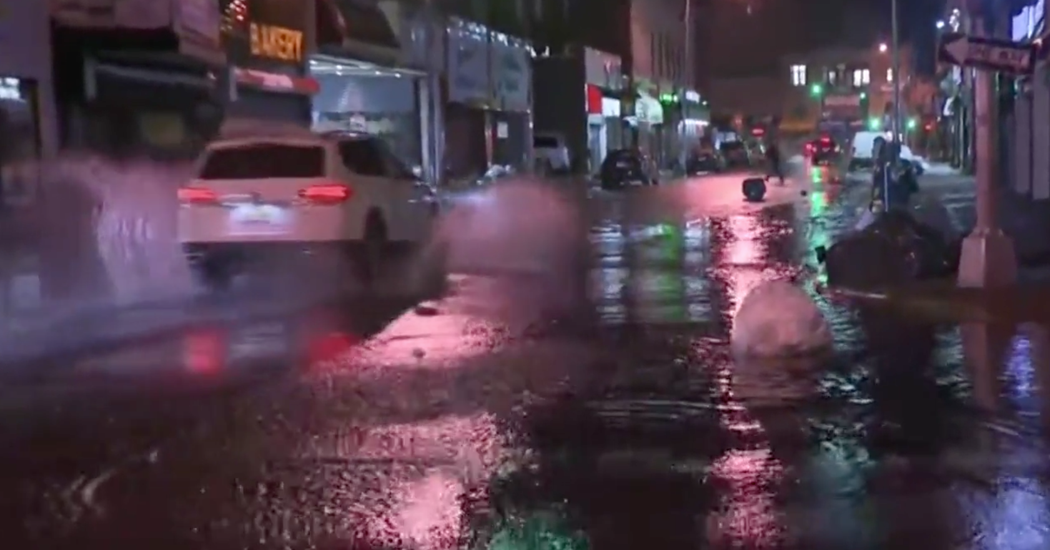 
The New York area woke up to heavy rain and wind on Tuesday morning as a menacing early season Nor’easter pounded the region.

“Take it slow and allow yourself extra time if traveling today,’’ the National Weather Service in New York urged residents.

A flash flood watch was in effect for the New York area through 6 p.m. Tuesday. The Weather Service recorded 1.12 inches of rain in Central Park by 4:30 a.m.

Storm drains in Midtown were straining to keep up with the heavy rains filling the streets, backing up at the corners and creating large puddles for pedestrians to navigate.

“We’re looking at a long-duration event,” said Brian Ciemnecki, a forecaster with the Weather Service, explaining that rain will soak the city through the day and high winds will persist into Wednesday.

Strong winds of 40 to 60 miles per hour were expected across the coastal areas including New York City on Tuesday and into Wednesday, raising the prospect of downed trees and power failures.

Both Gov. Kathy Hochul of New York and Gov. Philip D. Murphy of New Jersey declared states of emergency Monday evening, directing agencies under their command to be ready to act on emergency response plans.

In New York City, officials issued a travel advisory warning those who “must move about” to be careful when doing so and to also give themselves extra time to reach their destinations.

City officials also advised residents of basement apartments to be ready “to move to a higher floor during periods of heavy rain” and anyone living in flood-prone areas to “keep materials such as sandbags, plywood, plastic sheeting, and lumber on hand” to protect their homes.

Tens of thousands of New Yorkers live in basement units, many of them illegally converted and with just one way in or out. The threat these residents face when torrential rain causes sudden flooding was brought into stark relief last month when rushing waters unleased by remnants of Hurricane Ida killed 11 people, including a toddler and his parents, in basement apartments.

At least 43 people died across New York, New Jersey, Pennsylvania and Connecticut amid the hurricane’s watery remnants, as the deluge of rain overwhelmed the region’s antiquated infrastructure.

The storm also crippled New York City’s mass transit system, the second time in just a few months that the subway was the setting for striking images of water rushing freely into places clearly unable to accommodate it.

At a news briefing on Monday before rain had started to fall, Janno Lieber, the acting chairman and chief executive of the Metropolitan Transportation Authority, which operates the city’s subway and buses, said the agency was “prepared for whatever comes.”

Mr. Lieber, noting several times that flash floods are unpredictable by nature, said transit officials did not expect rain anything like the fierce, three-and-a-half-inches-in-one-hour burst brought by Ida.

Still, he and other officials said, work crews had already been dispatched to monitor and prepare 50 subway stations identified as especially vulnerable to flooding and that the authority had 900 pumps set to clear any stations that did become inundated.

Mr. Lieber emphasized that workers had pumped 75 million gallons of water out of the system during the storm and that only 10 trains out of hundreds that were running during the most intense period of rain had gotten stranded between stations.

“What Ida proved is that the M.T.A. is incredibly resilient,” he said.