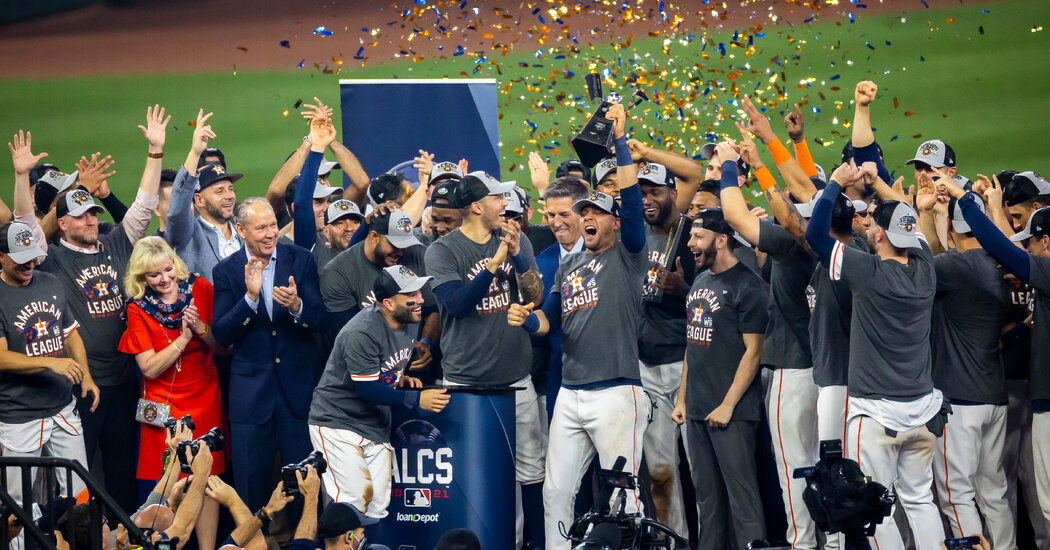 
HOUSTON — Depending on your point of view, the Houston Astros are fascinating, maddening or confusing. Maybe, though, they are all of that at once. The world, after all, is many shades of gray.

Some baseball fans may never forgive the franchise for cheating during its 2017 World Series-winning season. Those transgressions were exposed in November 2019 and subsequently investigated by Major League Baseball, which said the Astros’ illicit sign-stealing scheme continued for at least part of 2018. The league handed down penalties before the 2020 season.

Still, the Astros are enjoying one of the best runs in baseball history, all the while continuing to unnerve fans and opponents. The general manager is different now. So is the manager. As is the cast of characters surrounding the core group of players. Yet the Astros keep winning. Maybe they didn’t need a trash can.

After toppling the Boston Red Sox, 5-0, in Game 6 of the American League Championship Series at Minute Maid Park on Friday, the Astros — once again — are in the World Series. Including their now-tainted 2017 season, the Astros have reached the final round three times in the past five years. They fell one win short of winning the American League pennant in 2020.

The Astros will face the winner of the N.L. Championship Series between Atlanta and the Los Angeles Dodgers in a World Series that begins on Tuesday.

To get this far, the Astros won 95 games during the regular season and claimed their fourth A.L. West division title in five years. Although their pitching staff lacked the star power of past playoff runs, the Astros excelled in many facets of the game — on the mound, at the plate and in the field.

Their biggest strength was a relentless offense that led the majors in scoring and was the toughest to strike out. And the talented core of their roster — first baseman Yuli Gurriel, second baseman Jose Altuve, shortstop Carlos Correa and third baseman Alex Bregman — was the common thread among all three World Series teams.

In the first round of the postseason, the Astros blew past the A.L. Central champion Chicago White Sox, dropping just one game and outscoring their opponent by 31-18.

In the A.L.C.S., where the Astros were making their fifth straight trip, the Red Sox put up more of a fight. Not only did they possess more experience than the White Sox, they also had one of the best offenses in baseball, which threatened the Astros’ pitching staff.

The Astros trailed in the series, two games to one, before rattling off three straight victories. They scored nine runs in Game 4 and again in Game 5 in Boston.

Back in Houston for Game 6, the winning formula was different. The Astros held a 2-0 lead through seven innings — both of which featured the slugger Yordan Alvarez, who was named the most valuable player of the series — and then tacked on three more on a home run by Kyle Tucker in the eighth. That was more than enough for a pitching crew led by starter Luis Garcia, who allowed just one hit over five and two-thirds scoreless innings.