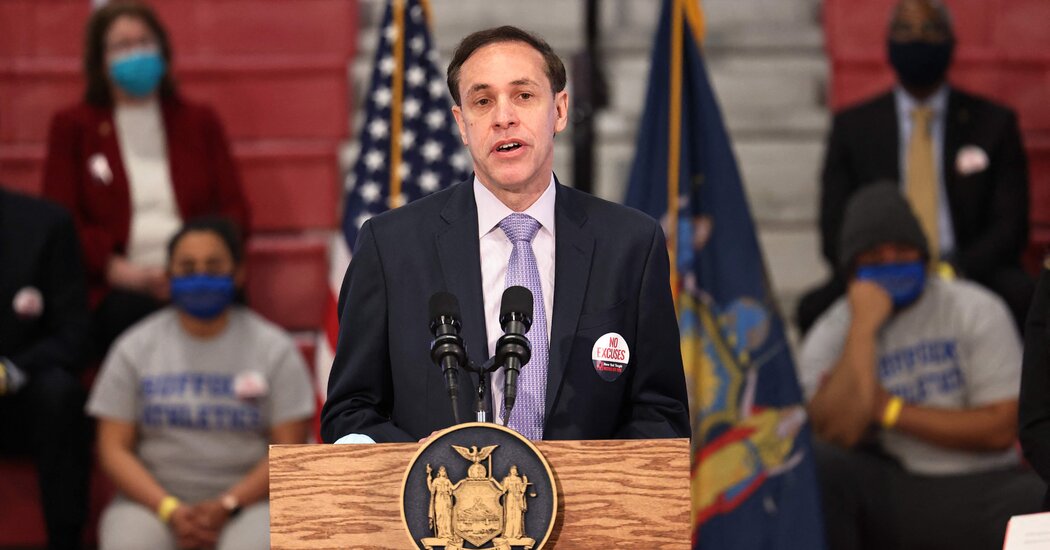 
Dr. Howard A. Zucker, the New York State health commissioner, has submitted his resignation, following political pressure for his removal over his role in the state’s pandemic response under former Gov. Andrew M. Cuomo.

Gov. Kathy Hochul, who announced Dr. Zucker’s resignation on Thursday, said that she agreed with his decision and that he would “stay on board” until she found a replacement.

Dr. Zucker, whom Mr. Cuomo appointed to the position in 2015, came under fire for the Health Department’s role in helping obscure the death toll of the coronavirus in nursing homes and in withholding health data from the Legislature last year.

Following Mr. Cuomo’s resignation last month, Ms. Hochul came under pressure from Republicans, and even some Democrats, to dismiss Dr. Zucker. Urging patience, Ms. Hochul had said she would take up to 45 days, or until early October, to decide whether to retain Dr. Zucker and other cabinet officials from the Cuomo era.

“I thank Dr. Zucker for his willingness to stay on board so we don’t have a gap in leadership until a person is identified,” she said. “I think I made it very clear on my first day in office that I’d be looking to build a new team. There will be other changes forthcoming. But I do respect everyone who has been a public servant, I thank them for their service.”

The state’s response to the pandemic’s ravaging of nursing homes, and the handling of death data from the facilities, is the subject of an ongoing federal investigation, as well as an inquiry being led by the State Assembly.

Under Dr. Zucker, the Health Department issued a controversial policy in March 2020 that effectively ordered nursing homes to take back residents who had been discharged from hospitals after being treated for Covid-19. Mr. Cuomo’s critics argued that the policy, put in place as the virus was surging in New York, helped it spread inside nursing homes, an accusation his administration vigorously disputed.

His departure comes while the state is still contending with the highly contagious Delta variant, as health officials grapple with a safe return to school and increasing vaccination rates among health care workers and children.

Dr. Zucker, 62, became a fixture of Mr. Cuomo’s daily coronavirus briefings at the height of the pandemic last year, helping calm anxious New Yorkers as the state quickly became an epicenter and faced a shortage of ventilators and hospital beds.

He helped prop up one of the most robust coronavirus testing programs in the nation, implement the state’s mask mandate, and orchestrate the broad economic shutdown that helped curb the spread of the virus.

But Dr. Zucker and other top Health Department officials were often overshadowed and, at times, overruled, by Mr. Cuomo, a micromanaging executive who sometimes eschewed advice from career health officials and instead crafted pandemic policy with a small group of close aides and associates.

Mr. Cuomo’s distrust in the Health Department — health officials would sometimes learn of major changes through his news conferences — contributed to a string of high-level departures from the department during the pandemic.

Indeed, an investigation by The New York Times in April found that Mr. Cuomo’s most senior aides had engaged in a sustained effort to prevent Dr. Zucker and other health officials from releasing the true death toll in nursing homes to the public and state lawmakers.

Even so, as the state’s top health official, Dr. Zucker became the target of intense criticism for the Cuomo administration’s lack of transparency when it came to health data.

Following months of scrutiny, the state attorney general released a report in January that found that the administration had undercounted virus-related deaths of nursing home residents by as much as 50 percent, forcing the Health Department to add more than 3,800 such deaths to its tally.

More than 15,000 virus-related deaths have been reported in nursing homes and assisted living facilities across the state.

In his resignation letter, Dr. Zucker emphasized that he was departing at a time when nearly 75 percent of the state’s adults had been fully vaccinated, while acknowledging some of the “new quagmires” the next health commissioner would need to confront, from booster shots to vaccine mandates — and legal challenges to them.

A pediatrician and former assistant director general of the World Health Organization, Dr. Zucker helmed the Health Department through a series of public health crises in New York, from the Ebola and Zika viruses to Legionnaires’ disease and a measles outbreak.

He said in his resignation letter that he intended to pursue “new opportunities that explore the hurdles and unknowns in medicine, policy and public health and voyage into my own imagination to work on overcoming them.”

“There comes a time when the baton should be passed in this marathon journey that we call public service in New York State,” he wrote. “With a fierce dedication to the public’s health, I have carried it through many a crisis in the last seven years and five months and placed the welfare of our residents at the forefront of all things, professional and personal.”