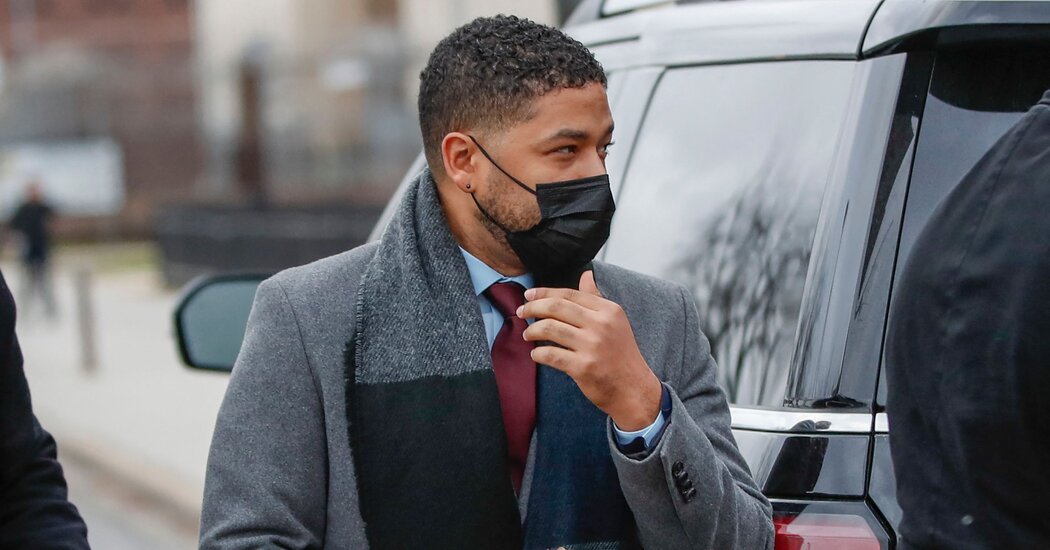 
Jussie Smollett took the stand on Monday in an effort to convince a Chicago jury that he did not orchestrate a racist and homophobic hate crime against himself but, instead, was the victim of both a real attack and the police’s rush to judgment in charging him.

Mr. Smollett, 39, submitted himself to questioning in his own trial to rebut the testimony of two key witnesses, Abimbola Osundairo and Olabinjo Osundairo, brothers who told the court last week that Mr. Smollett had instructed them in detail on how to attack him.

The Osundairo brothers said Mr. Smollett took them through a “dry run” of the attack on the day before it was supposed to occur in January 2019 and asked one of them to bruise him without inflicting real injuries while the other put a rope around his neck and poured bleach on him.

Prosecutors have argued that Mr. Smollett staged the attack because he was upset that the show on which he starred, the Fox hip-hop drama “Empire,” did not take seriously a threatening letter he had received at the studio.

But Mr. Smollett sought early in his testimony to indicate just how happy he had been with his role on the show and, asked directly, said he had no problem with Fox. Instead Mr. Smollett, who is gay, testified that it had been a blessing to win the role of Jamal Lyon, a gay singer-songwriter, that so closely mirrored his identity and to eventually earn $100,000 per episode.

“I had never seen a gay man — let alone a gay Black man — portrayed ever,” Mr. Smollett said. “I really, really wanted to do it.”

Testimony for the morning concluded before Mr. Smollett could address the attack itself and he was expected to return to that subject when he returned to the stand later on Monday.

Over the course of the trial, prosecutors have sought to paint a picture of the attack as a bid for publicity, pointing to how, days before the attack, Mr. Smollett had received the letter at the studio for “Empire.” It included a red stick figure hanging from a noose, a homophobic slur and the acronym “MAGA,” said Daniel K. Webb, the special prosecutor in the case, in the courtroom last week.

“He devised this fake hate crime to take place so that the ‘Empire’ studio would take this more seriously,” Mr. Webb said, “because this fake hate crime would get media attention.” But the showrunner for “Empire” at the time, Brett Mahoney, testified earlier on Monday that the show had actually taken the letter “very seriously,” and provided Mr. Smollett with additional security.

As he began his testimony, Mr. Smollett depicted himself to the jury in a lengthy biographical summary of his career as someone who grew up in a middle-class family of performers, received some work as a child actor, became deeply involved in charity organizations and returned to acting, landing the major role on “Empire.”

In January 2019, when the attack was reported, public sympathy for Mr. Smollett was immediate and widespread. But as the police investigation into the report stalled, suspicion grew about Mr. Smollett’s account, though the actor stood by it.

“It feels like if I had said it was a Muslim, or a Mexican, or someone Black, I feel like the doubters would have supported me much more,” Mr. Smollett told ABC’s Robin Roberts in February of that year. “A lot more.”

Days after that television interview, Mr. Smollett was arrested on charges that he staged the assault.

The Osundairo brothers told the police that Mr. Smollett had orchestrated the whole thing, giving them a $100 bill to buy supplies for the attack, including ski masks, a rope and a red hat meant to indicate that the attackers were supporters of former President Donald J. Trump.

“He wanted me to tussle and throw him to the ground and give him a bruise while my brother Ola would pour bleach on him and put a rope around him, and then we would run away,” Abimbola Osundairo testified.

Prosecutors have cited as evidence Instagram messages from Mr. Smollett to Abimbola Osundairo on the night of the attack, updating the brothers on his flight delay.

In the nearly three years since the attack, Mr. Smollett has maintained his innocence, pleading not guilty to six counts of disorderly conduct related to filing a false police report and insisting that the attack had happened as he had initially described.