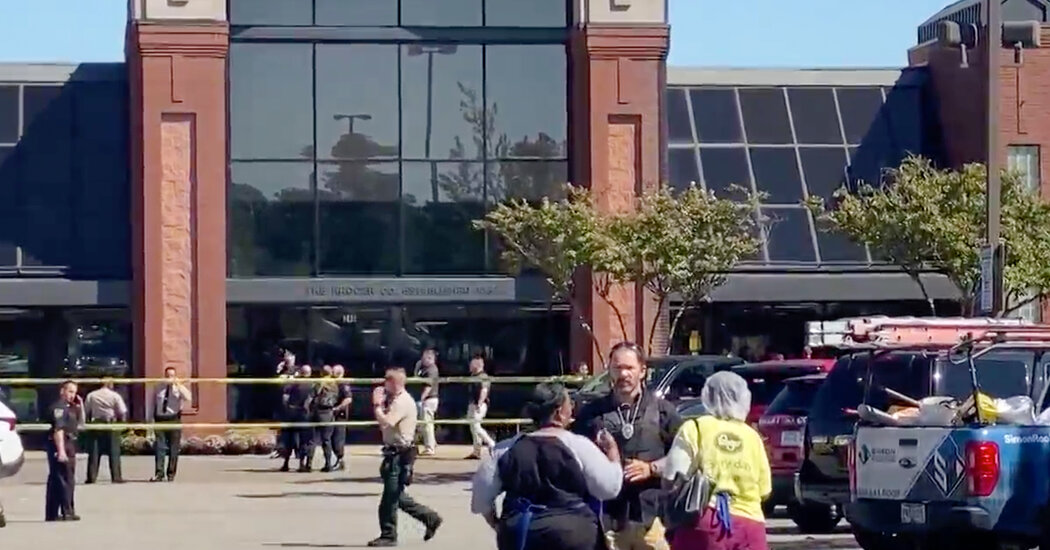 
A gunman opened fire inside a grocery store in Collierville, Tenn., on Thursday, killing one person and injuring at least 12 people before he shot and killed himself, the authorities said.

The authorities said they had received a report of a shooting at 1:30 p.m. inside a Kroger store in Collierville, about 30 miles east of Memphis.

The first police car arrived at 1:34 p.m., and officers flooded the area and went from aisle to aisle and room to room, helping injured victims and escorting employees out of hiding. Some had hidden in freezers and locked offices, Dale Lane, the Collierville police chief, said at a news conference.

He said the attacker had died and was believed to have been killed by a self-inflicted gunshot wound. The shooter’s vehicle was still in the parking lot, he said.

Chief Lane declined to say if the attacker had been an employee at the store, saying it was part of the investigation. He said the injuries to the victims were “very serious.”

The shooting was “the most horrific event that has occurred in Collierville history,” he said.

The Memphis Police Department said its officers were on the scene of the shooting and “assisting with securing the perimeter and scene.”

Local news stations showed a line of ambulances at the store with their lights flashing, as well as a group of employees gathered in the parking lot with police officers.

The shooting on Thursday came six months after a man armed with a military-style semiautomatic rifle and a pistol opened fire in a King Soopers grocery store in Boulder, Colo., killing 10 people, including a police officer. No motive has been publicly explained for that attack, which took place one week after eight people were fatally shot at three spas in the Atlanta area.

It was also not the first time that a Kroger supermarket had been the scene of violence. In October 2018, a white man shot two Black people at a Kroger store in Jeffersontown, Ky., in a racially motivated attack. The man, Gregory Bush, was sentenced to life in prison without the possibility of parole last year after pleading guilty but mentally ill to the murders of Vickie Lee Jones and Maurice E. Stallard.

Mr. Bush did not know either of the two victims, and had tried unsuccessfully to enter First Baptist Church of Jeffersontown, a predominantly Black church, just before the shooting, officials said.

In August, one person was killed and another person was injured in a shooting in the parking lot of Kroger in Sandy Springs, Ga., a northern suburb of Atlanta, The Atlanta Journal-Constitution reported. The newspaper said that shooting had been the result of a botched drug deal.