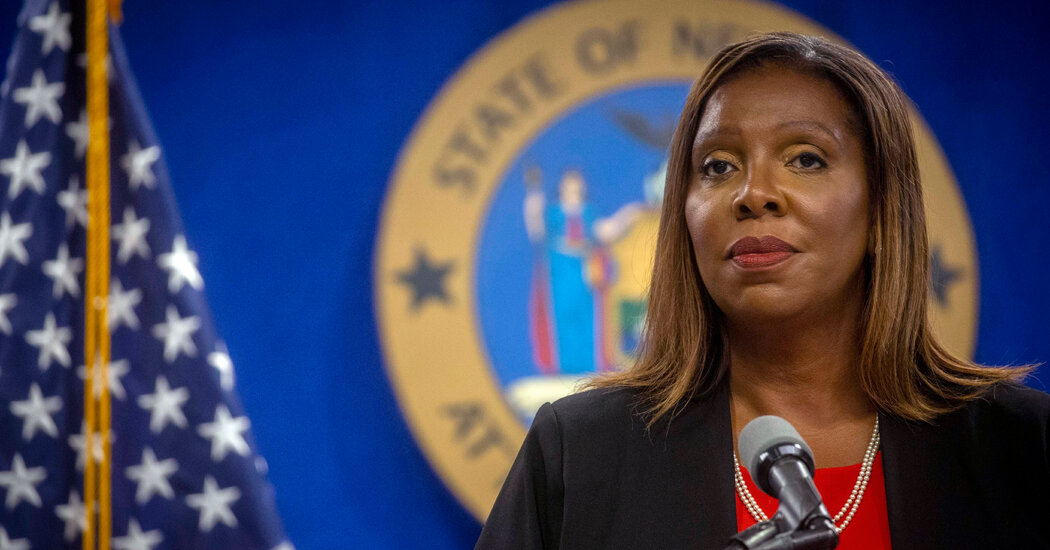 
Letitia James, the New York attorney general who oversaw the inquiry into sexual harassment claims against former Gov. Andrew M. Cuomo that ultimately led to his resignation, declared her candidacy for governor on Friday, setting up a history-making, high-profile matchup in the Democratic primary.

She begins the campaign as Gov. Kathy Hochul’s most formidable challenger, and her announcement triggers a start to what may be an extraordinarily competitive primary — a contest set to be shaped by issues of ideology, race and region in a state still battling its way out of the pandemic.

Her announcement comes at a volatile moment in state politics, a day after Mr. Cuomo was charged in a sexual misconduct complaint based on the account of one of the women whose claims of sexual harassment were detailed in the attorney general’s report.

That development, Ms. James said, validated “the findings in our report,” and to her allies it further cemented the case for her leadership. But it has also added fresh fuel to Mr. Cuomo’s suggestion that her investigation was politically motivated, a message that may resonate with some of the voters who still view him favorably.

“I’m running for governor of New York because I have the experience, vision, and courage to take on the powerful on behalf of all New Yorkers,” Ms. James wrote on Twitter as she released her announcement video on Friday.

In the video, a narrator said that Ms. James was running “for good-paying jobs, a health care system that puts people ahead of profits, to protect the environment, make housing more affordable and lift up our schools in every neighborhood.” The video did not mention Mr. Cuomo by name.

Ms. James, a veteran Brooklyn politician and the first woman of color to be elected to statewide office in New York, is seeking to become the first Black female governor in the country; Ms. Hochul, who is white, is the state’s first female chief executive and the first governor in more than a century to have deep roots in western New York.

The race may have even broader implications as a key barometer of the direction of the Democratic Party in the Biden era. Ms. Hochul, of the Buffalo area, was once known as a more conservative Democrat, but she has increasingly moved leftward.

Ms. James, by turn, has plenty of connections to the relatively moderate Democratic establishment, but also has longstanding ties to the left-wing Working Families Party. It is not yet clear what issues she will use to differentiate herself politically from Ms. Hochul, but there is plainly the potential for vigorous clashes over how best to move the state and party forward.

Her announcement came two days after The New York Times and other outlets reported that she and her team had begun informing key political players of her intentions.

“Since she was first elected as a Working Families Party candidate nearly 20 years ago, Tish has been a courageous fighter for everyday New Yorkers,” said Sochie Nnaemeka, the state director of the New York Working Families Party. “We expect that Tish will campaign with a clear progressive vision for New York.”

Ms. James enters the race with a record that has drawn acclaim from many liberals in the state. As attorney general, she made headlines for suing the National Rifle Association, investigating President Donald J. Trump and presiding over the Cuomo inquiry, which was conducted by outside lawyers.

“I’ve sued the Trump administration 76 times — but who’s counting?” she deadpanned in the video.

She appeared to make several allusions to Mr. Cuomo. “I’ve held accountable those who mistreat and harass women in the workplace, no matter how powerful the offenders,” she said at one point.

“I’ve spent my career guided by a simple principle: Stand up to the powerful on behalf of the vulnerable,” she said at another. “To be a force for change.”

Ms. James’s allies believe that she could assemble a powerful coalition that includes Black voters of varying ideological views, a broad swath of left-leaning voters who welcomed her probes of Mr. Cuomo, national donors interested in her history-making potential, and a base in the most vote-rich part of the state.

She has deep connections to some labor leaders, too; John Samuelsen, the international president of the Transport Workers Union, declared minutes after Ms. James’s announcement that she “will be a governor that working New Yorkers can trust.”

In recent weeks, Ms. James has moved to build out her political and fund-raising teams, and she begins the contest with significant New York City connections after serving on the City Council and as public advocate.

She has also spent time traveling across New York — in her official capacity and for purely political outings — and she and her team have sounded out donors, labor leaders and elected officials as she moved toward a bid. Her team has begun seeking commitments for early endorsements that could help her build momentum quickly.

But Ms. Hochul begins the race with her own significant advantages. She has been racing to cement an overwhelming fund-raising edge; receptive donors are one of the many benefits of incumbency.

She is likely to perform strongly upstate, and she has spent years building relationships on Long Island. Since becoming governor, she has maintained a breakneck public schedule heavily concentrated in the five boroughs, working to shore up her downstate strength and tapping a lieutenant governor, Brian A. Benjamin, who hails from Harlem.

And she has already locked down significant institutional support from groups including the Democratic Governors Association and Emily’s List, the fund-raising powerhouse that backs female candidates who support abortion rights. She has been endorsed by county chairs across the state, the state Democratic chairman and the president of the N.A.A.C.P. New York State Conference.

Many New Yorkers approve of the way she has handled the transition from a decade of Mr. Cuomo’s iron-fisted reign and appear inclined to give her more time to acclimate to the job — while some Democrats would prefer Ms. James to stay as attorney general to see through existing cases, including one involving Mr. Trump and his business dealings.

Ms. Hochul and Ms. James are unlikely to be the only contenders for the nomination, and there is a real possibility of the kind of messy, crowded primary that some party leaders, wary of Democratic infighting, had hoped to avoid.

Two of Ms. James’s fellow Brooklynites, Mayor Bill de Blasio and Jumaane D. Williams, the public advocate, are both taking steps toward campaigns for governor and could cut into her coalition in New York City.

Representative Thomas Suozzi, who represents Long Island and a sliver of Queens, has also been considering a run. Unlike the other possible contenders, he would seek to outflank Ms. Hochul as a moderate option in the race as she works to build strength in Nassau and Suffolk Counties. Steven Bellone, the Suffolk County executive, is also weighing a campaign.

But for months, the question of whether Ms. James would run was the defining issue of the nascent primary contest, with some allies describing her as deliberative, and others growing increasingly eager to learn her decision as other aspects of the race came into focus.

Her answer goes a long way toward cementing the contours of the field.

Now, perhaps the biggest unknown is the question of how Mr. Cuomo may seek to involve himself in the race. The former governor, who as of the most recent filings continued to maintain a large war chest, and his team have repeatedly sought to question Ms. James’s integrity, attacking her in emails and letters sent to onetime supporters.

“The fact that the attorney general — as predicted — is about to announce a run for governor is lost on no one,” Richard Azzopardi, a spokesman for Mr. Cuomo, said in response to the complaint on Thursday.

Ms. James, for her part, laced into those efforts at a recent speech in New York City as she defended her work.