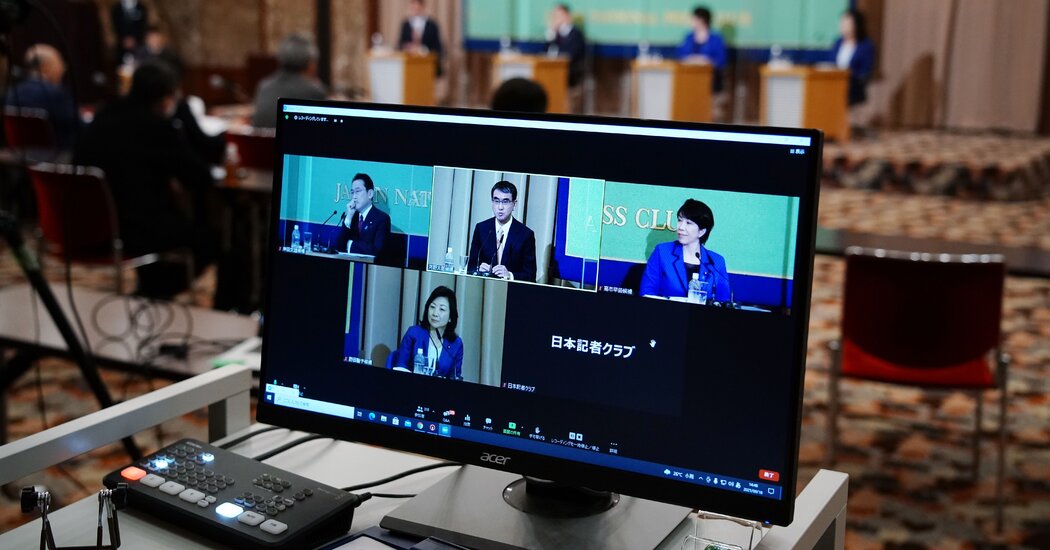 The vote for a new leader of the Liberal Democratic Party of Japan is a staid affair, empty of any of the pomp and ceremony of party congresses in places such as the United States and China.

But the stakes are still high. The election will determine the leadership of the world’s third-largest economy, a country grappling with serious economic and demographic challenges as it cycles through its third prime minister in the year and a half of the pandemic.

The four candidates have spent the last two weeks glad-handing and lobbying for support from their party ahead of today’s secret ballot, hoping to win an absolute majority of the 764 votes up for grabs.

Half of those votes come from rank-and-file party members, who will gather in their local headquarters at 1 p.m. to tally support.

The other half are from the party’s parliamentarians, who will soon assemble in a central Tokyo hotel.

The results of the contest will be announced around 2:20 p.m. But if no one wins an absolute majority — a likely outcome — the top two vote-getters will advance to a second round.

Now things get interesting. In the run off, the power to choose a winner shifts decisively toward the parliamentarians. The rank and file get just 47 votes at this stage, and the outcome will hinge on the political maneuvering and horse trading the candidates carried out in the days leading up to the election as they fought for support from the party’s internal factions.

A final decision will come before 4 p.m. and the winner will hold a news conference shortly after.

Winning the contest will all but guarantee them the premiership, although nothing will be official until Oct. 4, when the Parliament will meet to officially select Japan’s new leader.

The winner of the race to lead Japan’s ruling Liberal Democratic Party is all but assured to be prime minister after the general election. Unlike in past party elections, when leaders unified around a single candidate, there is no clear favorite this time. Here’s a rundown of the three leading contenders.

Polls have found that the public favors Taro Kono, the cabinet minister overseeing Japan’s coronavirus vaccine rollout, by at least two to one. His Twitter following of 2.4 million dwarfs those of his three rivals combined.

But in the back rooms where Japanese political decisions are made, Mr. Kono, 58, is not nearly as well liked. His reputation as the Liberal Democrats’ most outspoken nonconformist and his left-leaning views on social issues put him out of step with the party’s conservative elders.

Many Liberal Democratic members of Parliament consider Fumio Kishida, 64, a moderate with tepid support in the polls, to be the safest choice, according to media tallies of lawmakers.

Former Prime Minister Shinzo Abe, who resigned last year because of ill health, has backed Sanae Takaichi, 60, a hard-line conservative. Ms. Takaichi, who would be Japan’s first female prime minister, has strong backing from the right wing of the party, but her poll numbers are low. Another woman in the leadership race, Seiko Noda, 61, has little support from either the public or the party.

When people think of preordained elections these days, they tend to look to Russia or Iran or Hong Kong. But in Japan, a parliamentary democracy and the world’s third-largest economy, the same party has governed for all but four years since 1955, and most expect it to win the general election due by the end of November.

So on Wednesday, when the Liberal Democratic Party chooses a successor to Yoshihide Suga, the unpopular prime minister and party chief, it will almost certainly anoint the prime minister who will lead Japan into the new year.

But why, in a country with free elections, where voters have expressed dissatisfaction over the government’s handling of the coronavirus and the Olympics, can the Liberal Democratic Party remain so confident of victory?

The Liberal Democrats try to be all things to all people.

The party formed in 1955, three years after the end of the postwar American occupation of Japan. Yet the United States had a hand in its gestation.

Fearing that Japan, which had a growing left-wing labor movement, might be lured into the Communist orbit, the C.I.A. urged several rival conservative factions to come together.

“They didn’t necessarily like each other or get along, but they were engineered into one mega-party,” said Nick Kapur, an associate professor of history at Rutgers University.

The new Liberal Democratic Party oversaw Japan’s rapid growth during the 1960s and 1970s, which helped to solidify its power. And over the decades, it has morphed into a big tent, as reflected in the candidates seeking the party’s top position this week.

Sanae Takaichi, 60, is a hard-line conservative. Fumio Kishida, 64, is a moderate who talks about a “new capitalism.” Seiko Noda, 61, supports greater rights for women and other groups. Taro Kono, 58, eventually wants to phase out the nuclear power industry.