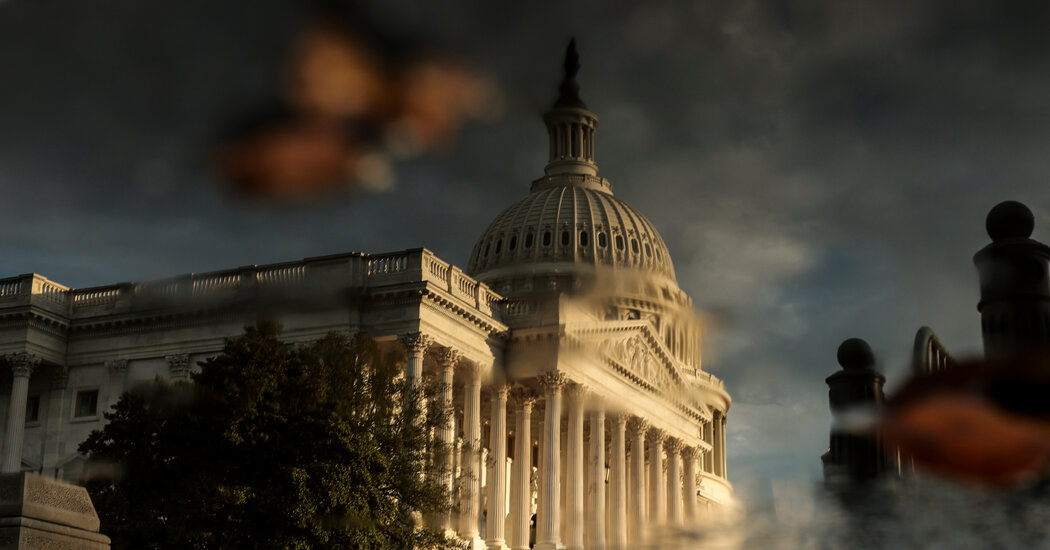 
Democrats met privately on Capitol Hill on Tuesday as they searched for an elusive compromise on a domestic policy and climate package, pressing to resolve crucial disagreements over health benefits, paid leave, environmental provisions and how to pay for the entire plan.

As Democrats seek to pacify key centrist holdouts balking at central pieces of the bill, party leaders are lobbying rank-and-file lawmakers, particularly liberals, to accept a measure that will be far smaller than an initial $3.5 trillion blueprint that passed Congress earlier this year. House Democrats huddled on Tuesday morning to discuss the negotiations at their weekly caucus meeting, while Senate Democrats were expected to continue privately meeting throughout the day on climate and tax provisions.

Speaker Nancy Pelosi of California told Democrats they were on “the verge of something major,” according to two people familiar with her comments, who disclosed the private remarks on condition of anonymity. She called the legislation “transformative, historic and bigger than anything else.”

The caucus concluded shortly before 10:30 a.m. Ms. Pelosi and Representative Pramila Jayapal of Washington, the chairwoman of the Congressional Progressive Caucus, are set to meet this afternoon as talks continue over the plan, according to an aide.

Leaving the caucus meeting, Ms. Pelosi said “there’s not that much more time — we have to have decisions largely today, a little bit into tomorrow, so we can proceed.” Asked about what was left on the negotiating table, she said, “I think it’s pretty self-evident.”

The White House and congressional leaders hope for a deal on the expansive plan this week, before President Biden leaves on Thursday for a trip that includes a United Nations climate conference in Glasgow, where he is expected to call for stronger international action to counter to the toll of climate change. His case could be bolstered by an agreement on a new social policy bill that includes strong new climate programs.

“It changes the lives of the American people,” Mr. Biden said of the proposed legislation during an appearance at a transit maintenance facility in Kearny, N.J., on Monday, where he promoted the plan’s payments to families with children and child care assistance. “So let’s get this done — let’s move.”

But with Republicans uniformly opposed to the bill, Democrats cannot afford to lose even a single vote from their party in the 50-50 Senate, giving any senator outsized power to sink the plan over even a single provision. That has further complicated the effort to muscle the bill through Congress using a special budget process known as reconciliation that shields it from a filibuster.

The emerging compromise could spend around $1.75 trillion over 10 years, though leading Democrats were trying to nudge Senator Joe Manchin III of West Virginia, a key centrist, closer to $2 trillion. Mr. Manchin and other moderates have resisted significant pieces of the plan, including environmental provisions, health care expansions and tax increases designed to pay for the spending.

Mr. Manchin, in particular, has balked at multiple climate provisions, in part as a defense of his coal-rich state. He has effectively jettisoned a proposed $150 billion program that would replace coal- and gas-fired power plants with wind and solar power, and is now pushing to remove or modify a provision that would impose a fee on emissions of methane, which are commonly produced in coal mining.

He is also facing pressure from his colleagues over his resistance to two key expansions of health care benefits and a new paid leave program. He has so far opposed a push, led by Senator Bernie Sanders, the Vermont independent who is chairman of the Budget Committee, to expand Medicare to include dental, vision and hearing benefits, citing the program’s financial instability.

And he has also expressed concerns about a push to cover a Medicaid expansion for the dozen states whose leaders have refused to expand the program under the Affordable Care Act. West Virginia is among the states that expanded Medicaid and pay 10 percent of the cost, and Mr. Manchin has said the proposal would in essence reward states for holding out.

The Senate Finance Committee is readying the details of a billionaires’ tax, an entirely new approach to taxing wealth, and other tax provisions that will help pay for the bill without increasing the corporate or individual tax rates. While House Democrats were expressing concerns about the details of the plan, which is largely being crafted by their Senate counterparts, Senator Kyrsten Sinema of Arizona, a key holdout on the bill, has remained opposed to those rate increases.

Senator Joe Manchin III of West Virginia has pushed Democrats to drop or weaken a second major climate change provision from the sweeping social policy and environmental spending bill that the White House hopes to finalize this week, according to two people familiar with the matter.

Mr. Manchin, a centrist Democrat from one of the country’s top coal- and gas-producing states, wants to remove or modify a provision that would impose a fee on emissions of methane, a powerful planet-warming pollutant that leaks from oil and gas wells. He has already effectively succeeded in stripping the bill of its most powerful climate change provision, a program that would have rapidly shut down coal and gas-fired power plants and replaced them with wind and solar power.

Democrats are racing to finalize the details of the budget bill this week. President Biden is set to attend a major climate summit in Glasgow this weekend, and he hopes to point to the bill to make the case that the United States, the world’s largest historical greenhouse polluter, is finally taking strong, forceful action to cut its fossil fuel emissions — and to push other countries to do the same. Mr. Biden has pledged that the United States will reduce its emissions 50 percent from 2005 levels by 2030.

Analysts have found that it would be technically possible, although difficult, for the United States to meet that goal without passing the clean electricity legislation that Mr. Manchin opposes. The broader spending package still includes about $300 billion in tax credits for wind and solar energy, which analysts say could get the United States about halfway to Mr. Biden’s target. But removing the methane fee legislation could further weaken his case in Glasgow.

A spokeswoman for Mr. Manchin did not respond to a request for comment.

A spokeswoman for the senator who is writing the methane fee legislation said it has not yet been excised from the bill.

“The methane fee is not out of the package,” said Rachel Levitan, a spokeswoman for Senator Thomas Carper, the Delaware Democrat who leads the Senate Environment Committee. “Chairman Carper is working to get robust climate provisions in the reconciliation bill and is in active negotiations to ensure that the bill meaningfully reduces greenhouse gas emissions.”

Another person familiar with the matter said that Mr. Manchin appeared open to negotiating the details of the methane fee to make it easier and cheaper for natural gas companies to comply.

Separately, the Environmental Protection Agency is expected to release a draft regulation as soon as this week that would compel oil and gas producers to monitor and plug methane leaks from existing oil and gas wells. Among Mr. Manchin’s objections to the fee is that it could be duplicative of those rules, according to the two people familiar with the matter.

While Senate Democratic leaders have pledged that the broader budget legislation — which could run between 5,000 and 10,000 pages — will be completed this week, people familiar with the process said it was more likely that Democrats would agree to a broad-brush framework before Mr. Biden travels to Glasgow, and that he would have to make the case to the world that lawmakers would indeed soon pass the bill.

“The entire world knows the name Manchin now,” said Rich Gold, a Democratic energy lobbyist and former E.P.A. adviser. “So if he is able to go to Glasgow and say, here is the piece of paper representing the deal, and here’s Senator Manchin’s name on the bottom, I think the Germans will be OK.”