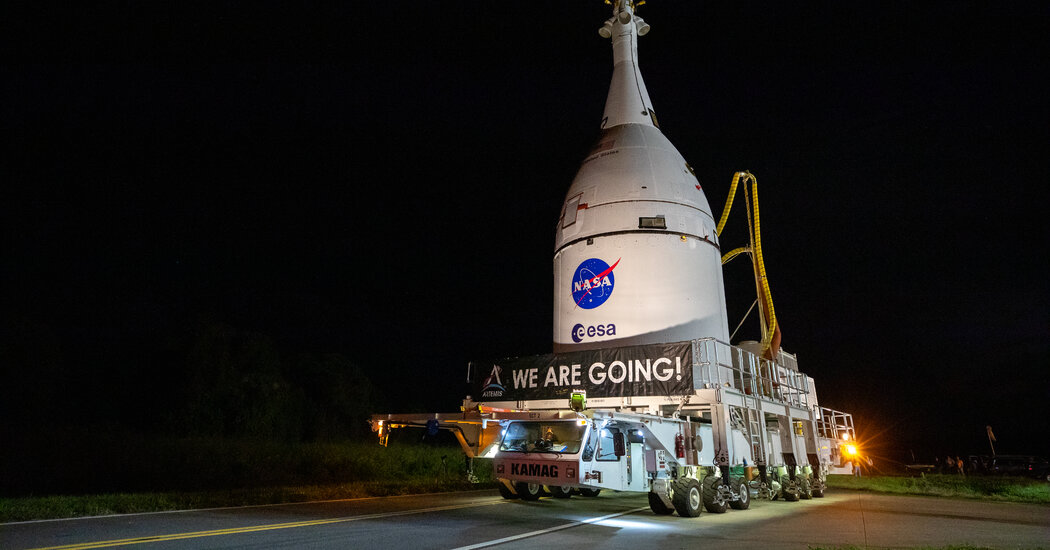 
NASA set dates on Friday for its giant rocket to launch a spacecraft to the moon and back, beginning in mid-February next year. No, for real this time.

In a news conference, officials from the space agency announced a two-week period beginning Feb. 12 for a flight — without astronauts aboard — of the Space Launch System, the biggest rocket flown by the agency in decades. It will loft Orion, a capsule for transporting astronauts to deep space, on an uncrewed trip that orbits the moon then returns to Earth.

“We are on track to fly, and this team will be ready when our flight hardware is ready,” said Mike Sarafin, the NASA official who is the mission’s manager.

Whether NASA will proceed with this February timeline depends on the results of testing on the ground leading up to the launch window, including a January dress rehearsal of the launch. The officials also announced more two-week flight periods in March and in April, both without astronauts, which are based on the moon’s alignment with Earth.

The long-delayed flight, called Artemis-1, is aimed at testing the safety of the vehicle. A future flight, Artemis-2, will carry a crew on a similar voyage, which will echo the Apollo 8 mission in 1968. NASA hopes to be able to carry astronauts back to the lunar surface, including the first woman and first person of color, in the coming years.

No humans have visited the moon since the Apollo 17 mission in 1972. In the years that followed Apollo, NASA turned its attention to the space shuttles and to building a space station in low-Earth orbit. The agency possessed no equipment for venturing farther from the planet.

To send people back to the moon, NASA needs a rocket approaching the power of the Saturn V that carried the Apollo astronauts. In 2011, the Obama administration announced the beginning of the Space Launch System, a rocket based on designs from Constellation, an earlier scrapped program.

S.L.S. is a monster of a rocket, capable of lofting 70 metric tons to space. A modified version of the rocket that will fly in the future would heft 130 tons — even more than the Apollo-era launcher. Flights of the Space Launch System will be expensive, about $2 billion per launch, although Congress has steadily funded the program. NASA has so far spent $10 billion on the rocket, plus another $16 billion on the Orion capsule.

But little has gone according to plan with S.L.S. NASA scheduled its first flight for 2017. It failed to meet that goal, and a 2018 audit faulted poor performance by Boeing, the main contractor working on the rocket’s booster stage, for much of the missed deadlines. As problems persisted, the Covid-19 pandemic added to delays for the program.

In January 2021, the rocket was finally ready for its first big test, a sustained firing of the engines that would simulate the stresses of a trip to orbit. The test was supposed to last for eight minutes, but was cut off after only about a minute.

During the second attempt in March, the rocket recorded a sustained 499.6-second burn of the giant engines that sent a giant cloud of steam over the massive test stand in Mississippi. Once the test was deemed a success, the agency shipped the massive rocket to the Kennedy Space Center in Florida to begin preparations for flight.

This week, the Orion spacecraft was lifted atop the rocket and put into place. Together, they stand 322 feet tall, or higher than the Statue of Liberty and its base.

If an assortment of spaceflights stick to their schedules, 2022 could be one of the busiest years the moon has ever seen. In addition to Artemis-1, NASA plans to send a small satellite to orbit the moon and a pair of robotic landers carrying a variety of private cargo to the lunar surface. China, Russia, India and South Korea have all announced plans for lunar orbits or landings in 2022.

President Trump committed the United States to returning astronauts to the moon by 2024, a target the Biden administration has not changed. But analysts have been skeptical of reaching that ambitious goal, given that much of the hardware — including a spacecraft to actually land astronauts on the lunar surface — is not yet built.

NASA awarded a contract to SpaceX, the private company founded by Elon Musk, to use its Starship spacecraft as a lunar lander. Starship is still in its prototype stage and has not yet launched to orbit. Blue Origin, the company founded by Jeff Bezos of Amazon, also filed a lawsuit in federal court over the contract, arguing that NASA awarded it to SpaceX unfairly. Should a judge side with Mr. Bezos’ company, it could force NASA to start again, further delaying the lunar lander program.