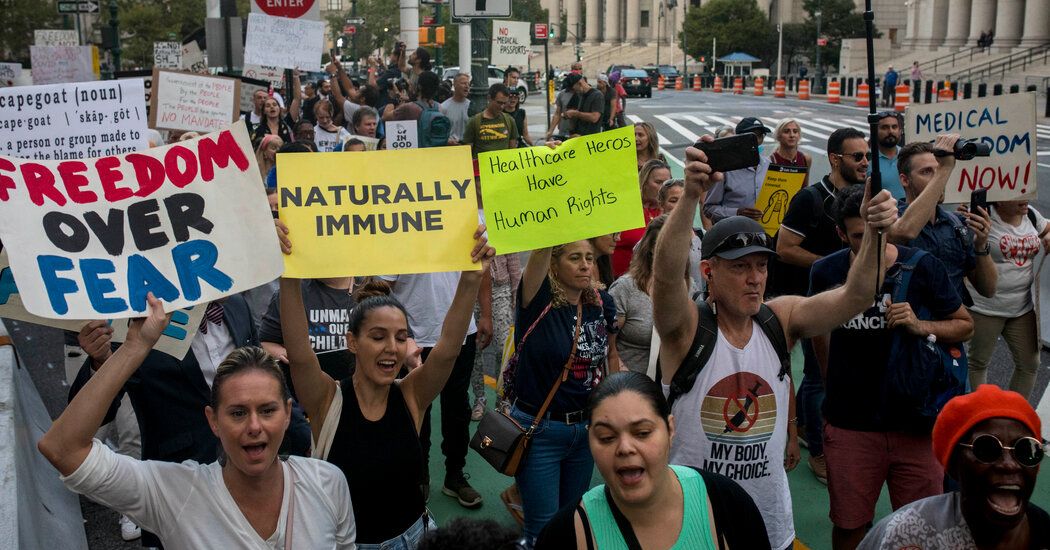 
One issue in the litigation is whether it is lawful for the state to offer medical, but not religious, exemptions.

What have the courts done so far?

Much of the focus is on Federal District Court in Utica, where 17 plaintiffs — including doctors and nurses — have argued that the state mandate restricts their First Amendment right to practice their religion and intrudes on federal anti-discrimination law.

“When you grant an exemption and then days later yank it away, that indicates a targeting of religion,” a lawyer for the plaintiffs in the Utica case, Christopher Ferrara, said in an interview.

The judge hearing the case, David N. Hurd, has temporarily barred the state from trying to force any hospital or nursing home to fire a worker seeking a religious exemption.

But under Judge Hurd’s order, hospitals can refuse to grant religious exemptions, and nothing is stopping them from firing unvaccinated workers who have sought them, plaintiffs’ lawyers say. Still, some hospital systems, like NewYork-Presbyterian, have indicated they will take no action against employees with pending requests for religious exemptions while Judge Hurd’s order remains in effect.

Judge Hurd has indicated that he will issue a fuller ruling within two weeks.

The litigation in Utica is not the only court case in play. Another lawsuit, filed on behalf of two Long Island nurses and a health care worker in Syracuse, reached a federal appeals court in Manhattan on Wednesday. The case was brought by We The Patriots USA, Inc., an organization whose co-founder is a lawyer who has been involved in litigation against vaccine requirements in Connecticut.

In oral arguments before a panel of Second Circuit judges on Wednesday, a lawyer for the plaintiffs, Cameron Atkinson, said that two of the health care workers — nurses at Syosset Hospital on Long Island — had worked shifts as recently as Tuesday night. But their jobs were in imminent danger, he said, explaining that both “had been informed they would be terminated on a rolling basis.”