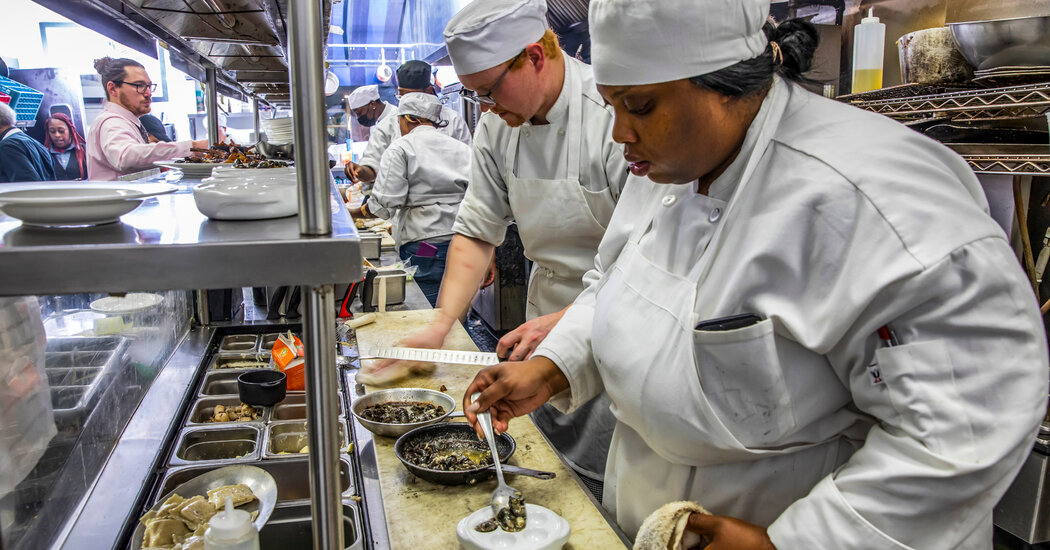 
Americans continued to leave their jobs in high numbers as the labor market grew hotter this fall, a sign the economy has maintained its momentum despite the pandemic.

The Labor Department said on Wednesday that 4.2 million people quit their jobs in October, a decline of about 205,000 from September but still close to a record high.

Job openings rose 431,000 to 11 million, paced by a 254,000 jump in the accommodation and food services industries. These sectors were pummeled by the pandemic but have recovered a bit as cases caused by the Delta variant of the coronavirus showed signs of easing in some places. The number of job openings was also close to a record high.

The data was collected well before the emergence of the Omicron variant. Still, the level of turnover in the labor market suggests that job seekers have more power and greater prospects than they have had in many years. Most economists expect hiring to remain healthy in the months ahead.

“The pickup in openings does seems to be driven by a slowdown in coronavirus cases,” said Nick Bunker, the director of economic research at Indeed Hiring Lab. “While quitting levels were down in October, they still remain higher than they’ve been in quite some time. Right now, we are in a labor market that is hot, and bargaining power is more tilted toward job seekers than in the recent past.”

Hiring has been volatile at restaurants and bars and in the travel industry, waxing and waning along with the virus. If the Omicron variant turns out to be as disruptive to normal life as Delta was, it could undermine those gains.

Last month, employers added only 210,000 jobs, well below the 546,000 jump in October. But the unemployment rate, which is based on a separate survey of households, dropped to 4.2 percent from 4.6 percent.

The huge number of open positions, and the falling unemployment rate, underscore why many companies have been complaining that they can’t find enough workers. That has been pushing wages higher, especially in lower-paid fields where salaries were stagnant for years.

Average hourly earnings for nonsupervisory workers were up 8 cents in November, to $31.03, and were 4.8 percent higher than a year earlier, according to the Bureau of Labor Statistics.

The rise in wages, along with a surge in prices, has focused attention on the potential threat of inflation.

Policymakers, including Jerome H. Powell, the Federal Reserve chair, still maintain that the price increases mainly reflect pandemic aberrations that will dissipate. But in congressional testimony last week, Mr. Powell signaled that the central bank could pivot from stimulating growth to keeping a lid on prices.

While the federal minimum wage is just $7.25 an hour, in many metropolitan areas employers say it’s hard to find workers for less than $15 an hour. Help wanted signs dot stores and restaurants in many places, and workers have more say in what benefits they receive or how much vacation they can take.

“It’s not just quitting for the sake of quitting, it’s quitting to find better employment,” said Gregory Daco, the chief U.S. economist at Oxford Economics. He expects employers to add 300,000 to 350,000 jobs per month in 2022.

But Omicron will cast a shadow over the economy over for the next few months, Mr. Daco added.

“We know that prior waves have been damaging in terms of economic activity,” he said. “We don’t know yet for certain, but it seems undeniable that Omicron will be a negative on economic activity over the winter.”