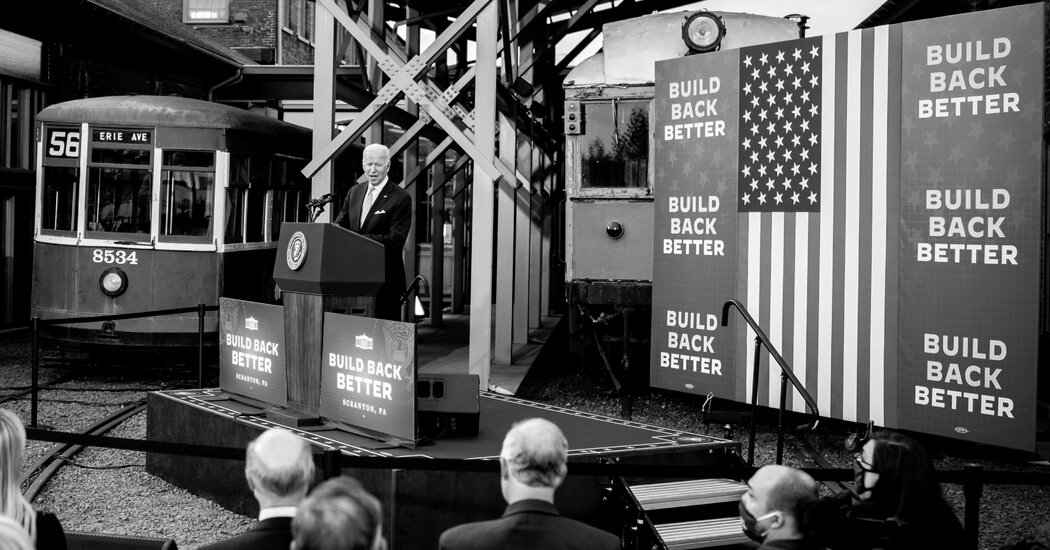 
This article is copublished with ProPublica, a nonprofit newsroom that investigates abuses of power.

There will be no bargains with an overheating climate.

The $3.5 trillion price tag that President Biden proposed for his climate-heavy Build Back Better Act might seem enormous. But over the long term, it will be a pittance.

By zeroing in on that number, the public debate seems to have skipped right over the economic ramifications of climate change, which promise to be historically disruptive — and enormously expensive. What we don’t spend now will cost us much more later.

The bills for natural disasters and droughts and power outages are already pouring in. Within a few decades, the total bill will be astronomical, as energy debts surge, global migration swells and industrial upheaval follows. The scale of the threat demands a new way of thinking about spending. Past budgets can no longer guide how governments spend money in the future.

Some economists and climate scientists have calculated that climate change could cost the United States the equivalent of nearly 4 percent of its gross domestic product a year by 2100. Four percent is likely a conservative estimate; it leaves out consequential costs like damages from drought and climate migration. It assumes the United States and other nations eventually move away from energy generated by oil, coal and natural gas, though not as immediately as many say is needed. In this scenario, the planet will still warm by around three degrees Celsius by the end of the century from preindustrial levels, a change that would be disastrous.

Four percent of American G.D.P. comes out to about $840 billion each year, if figured on last year’s economy. Measured over a decade the way the Build Back Better Act is framed, it’s nearly $8.4 trillion. But the actual cost of climate change to the economy could easily be far greater.

For every ton of carbon dioxide emitted starting today, temperatures will rise higher and faster. Solomon Hsiang, an economist and climate scientist at the University of California, Berkeley, and the co-director of the research group Climate Impact Lab, estimates that each degree Celsius of warming will erase 1.2 percent of G.D.P. per year, and those tolls will mount. Failure to curb climate emissions at all could put the United States on a path to losing 5 percent to 10.5 percent of its G.D.P. annually. Based on last year’s G.D.P., this extreme — and unlikely — scenario could amount to nearly $2.2 trillion each year.

In the more than three decades since Congress held its first major hearing on global warming, the nation has spent nearly $2 trillion sweeping up from disasters, many now believed to have been made worse by climate change. Since 2017, floods, hurricanes and other disasters have cost nearly $700 billion. This year alone has seen 18 disasters causing losses of more than $1 billion each.

And these figures don’t account for the drag of slowed growth. Dr. Hsiang and his colleagues have estimated, for example, that Hurricane Maria set back Puerto Rico’s prosperity by more than two decades.

What happens as these sorts of events become more frequent and more devastating?

The Fourth National Climate Assessment released under the Trump administration in 2018 lists the sorts of costs that Americans will see by late in the century in a scenario where emissions are allowed to continue to grow. Labor slowed by intense heat could cost the economy as much as $155 billion in lost wages each year; coastal property destruction, $118 billion; road damage, $20 billion; the spread of West Nile virus, $3 billion; and on and on.

The warming climate will worsen virtually every existing service, from water and sewage treatment to mass transit to food distribution to health care, and erode the wealth of millions. Dr. Hsiang, who presented his findings to Congress in 2019, estimates that over the next 80 years intensifying heat alone will reduce Americans’ incomes by $4 trillion to $10.4 trillion as farming becomes more difficult, food prices rise and labor productivity falls. Climate risks are already undercutting the value of real estate in the most vulnerable parts of the country, including the roughly $1.6 trillion worth of private property directly threatened by sea level rise and wildfires.

Opinion Conversation
The climate, and the world, are changing. What challenges will the future bring, and how should we respond to them?

“We’re going to be burning money just to adapt,” he told me recently. “Just the status quo is going to start costing us more.”

These numbers tell only part of the story, because the costs will be spread unequally. High-risk areas of the Gulf Coast could see 20 percent of their economies erased. Farm crop yields in parts of Texas and Oklahoma are projected to drop by 70 percent to 90 percent. People of color and the poor will likely fare worst.

Still, not a single one of these projections is a foregone conclusion. Eliminating as much carbon dioxide emissions as possible now would reduce the cost to taxpayers later. The National Climate Assessment estimates that limiting warming to around two degrees Celsius would reduce economic harm in many cases by 30 percent to 60 percent. Research by the Union of Concerned Scientists suggests that emissions cuts now could save $780 billion worth of residential properties and preserve at least $10 billion in annual property tax revenues by the end of the century.

Which brings us back to the sprawling reconciliation bill being assembled by Democrats in Congress. The Build Back Better Act proposes several hundred billion dollars a year for the next 10 years to slash emissions by cleaning up electricity generation and making electric vehicles commonplace, among other things. Medicare, subsidized child care and other family aid would also be expanded.

Any one of the spending packages under consideration in Congress is likely to pay for itself quickly, climate scientists say. Encouraging the transition to clean power and electrifying infrastructure is one way to make progress toward the emissions targets. Many economists contend that investing in social programs like health and child care will also help communities and families withstand climate-driven shocks.

The nation is venturing into an era where the siloed definitions of programs — infrastructure versus social welfare versus health care — no longer match the blended nature of the threat. Economic policy is no longer distinct from environmental policy, because, for example, creating high-paying jobs in southern Texas isn’t worth much if it’s too hot to go to work.

Just as economists have linked hotter temperatures to declining crop yields, they have also linked them to more disease, more crime, more suicides and other effects on to people’s health and well-being. All of them result in losses — both social and economic — and threaten the country’s strength and stability.

Policymakers will have to start somewhere. Among the bill’s lesser-known provisions are funding to survey forests and to hire people to fight wildfires; to provide agricultural research for farmers whose crops won’t grow in hotter climates; to help homeowners transition from gas appliances to low-emission technologies; to study the health risks associated with climate change, which can include pandemics and infectious diseases; and to provide better forecasting of dangerous weather.

Taken as a whole, much of the $3.5 trillion starts to look more like a down payment — an investment in keeping the planet, and the U.S. economy and standard of living, as close as possible to the way it is now.

Not to invest in these societal defenses today looks like an embrace of chaos and a choice to roll the dice on a period of unpredictable and disruptive change probably greater than anything in human existence.

When the stakes are viewed this way, investing in defending economic stability seems conservative. Failing to respond to the scientific and economic forecasts is what seems dangerously radical.

Abrahm Lustgarten is an environmental reporter for ProPublica, a nonprofit newsroom that investigates abuses of power. Sign up here to get its next investigation.