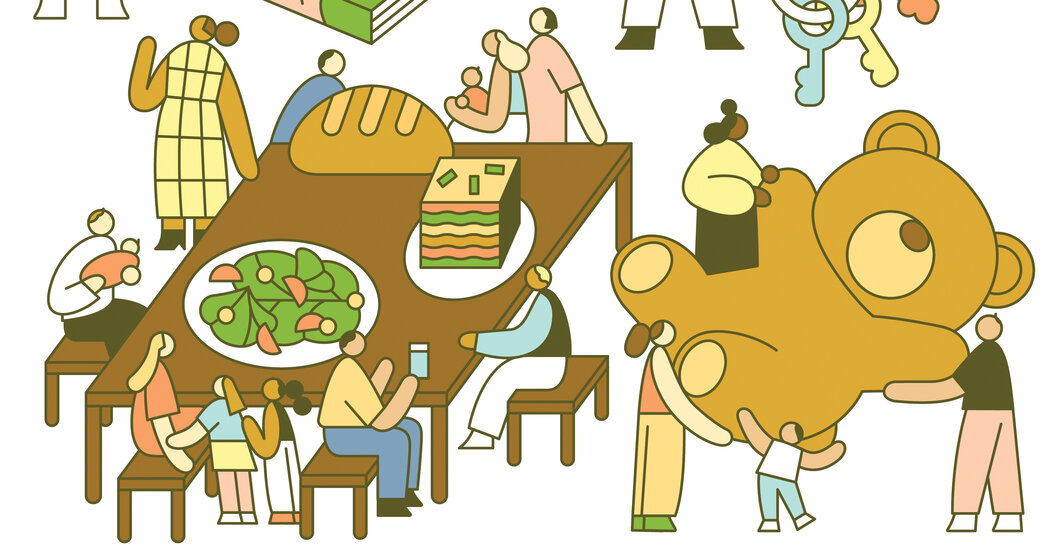 
If there is an adage that informs life in co-housing, it’s treat thy neighbor as thy family. Thy extended family, that is, assuming it’s a happy one. And what do happy families do? For one thing, they share stuff. As Rabbi Kimelman-Block led me through what felt like a labyrinth, he opened several overstuffed “sharing closets.” One was full of expensive, space-hogging items like travel cribs and skis. Another was for things being given away.

What else do families do? Well, chores, preferably cheerfully and collaboratively. And indeed, co-housers are expected to sign up for maintenance and cleanup days. Families also look out for one another. In co-housing that means, among other things, helping keep an eye on all the children. Many communities pay for formal day care. Most important, co-housers eat together. Breaking bread is probably the most effective bonding ritual society has ever come up with, and co-housers take turns cooking for and serving meals to other members. Some communities offer meals as often as six times a week. (Attendance is never mandatory.)

Most co-housing communities are anchored by a large, shared kitchen. It forms the heart of the common house, which may also offer pools, carpentry workshops, dance studios or meeting rooms — you name it, some community has it. In Eastern Village, common spaces have been cleverly tucked around the complex. Wending our way from basement to roof, Rabbi Kimelman-Block and I went through a dining room, a room for table tennis and foosball, a living room with a fireplace and fat leather chairs, a children’s playroom, a lamp-lit quiet room, a game room, a laundry room, an exercise room, a small lending library. The kitchen, though, is a problem. It’s not set up to cook communitywide dinners, in part because the fire marshal insisted that it install a crushingly expensive commercial range, and it went instead with a “warm-up kitchen,” as architect and developer Don Tucker, calls it. So Eastern Village is more or less stuck with potluck.

But then again, as my mother liked to say, the perfect is the enemy of the good. We have to make do if we want to make change.

Today, the detached single-family house — the lonesome cowboy model of domestic architecture — dominates the American landscape so thoroughly that it feels as if it were inevitable. As of 2019, there were about 100 million single-family homes in the United States (including mobile and prefab homes), compared to about 40 million multifamily ones. But it didn’t have to turn out this way. Although the home on the farm had been the American ideal since Thomas Jefferson popularized pastoralism, as the country urbanized after the Civil War, many visionaries saw opportunities for a less atomized, more female-friendly lifestyle.