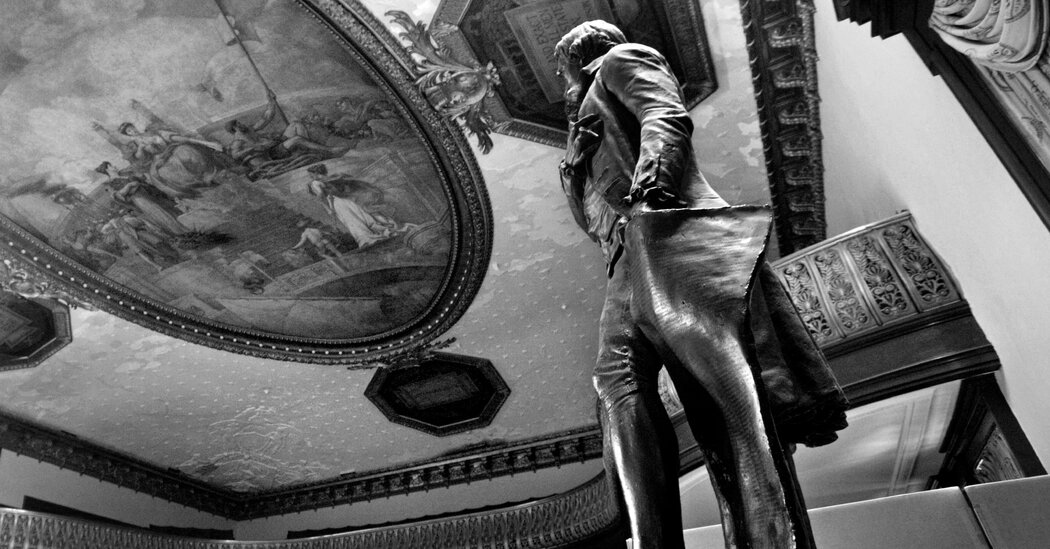 
But statues were just a piece of Mr. Levy’s efforts. Upon learning that Monticello had fallen into terrible disrepair, Mr. Levy arranged to purchase and rehabilitate the property. “The homes of great men,” he argued, “should be protected and preserved as monuments to their glory.” His family held the property into the 20th century.

And yet, for all of his noble intentions, Mr. Levy also kept enslaved persons at Monticello. The contradiction at the heart of Jefferson’s life — between high-minded ideals of freedom and the base horrors of slavery — continued.

Today visitors to Monticello learn about the Levy family and about the enslaved people who worked there. For a long time in the 20th century, both subjects were taboo.

In erecting the statues and preserving Monticello, Mr. Levy hoped to promote appreciation of Thomas Jefferson, particularly his stance on religious liberty. As a Jew who suffered so much persecution on account of his own religion, he appreciated Jefferson’s role in creating and advancing what is today known as the Virginia Act for Establishing Religious Freedom (1786). Its ringing declaration that “all men shall be free to profess, and by argument to maintain, their opinions in matters of religion, and that the same shall in no wise diminish, enlarge, or affect their civil capacities” justified Mr. Levy’s own lifelong battle to serve, as a Jew, in the Navy.

Those who now seek to remove the statue that Mr. Levy gifted to the people of New York view the gift as “a constant reminder of the injustices that have plagued communities of color since the inception of our country,” as a letter to the mayor from members of the Black and Latino Caucus explained. Through this lens, the statue symbolizes the horrors of slavery, which Jefferson was indeed guilty of perpetrating. But history, like Jefferson himself, is layered and complex. To Mr. Levy, who donated it, the very same statue served as a symbol of religious liberty. Mr. Levy considered it a tribute to the man who, he wrote, “did much to mould our Republic in a form in which a man’s religion does not make him ineligible for political or governmental life.”

Statues can convey multiple messages, as can historical memory. Rather than choosing between the memory of racial injustice and the embrace of religious liberty, let the d’Angers statue serve as a reminder that Jefferson embodied both at once — as did Mr. Levy. Pondering the many complexities and contradictions inherent in their lives may offer valuable lessons concerning our own.

Jonathan D. Sarna is a professor of American Jewish history at Brandeis University. He is the author, most recently, of “Coming to Terms With America: Essays on Jewish History, Religion and Culture.”