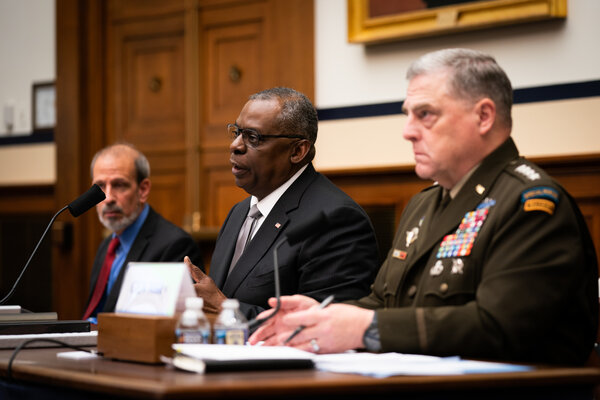 Following a New York Times investigation, the Pentagon acknowledged earlier this month that a U.S. drone strike in Kabul on Aug. 29 was a “tragic mistake” that killed 10 civilians, including an aid worker and seven children.

The extraordinary admission on Sept. 17 provided a horrific punctuation to the chaotic ending of the 20-year war in Afghanistan. Almost everything senior defense officials asserted in the hours, and then days, and then weeks after the Aug. 29 drone strike turned out to be false.

The explosives the military claimed were loaded in the trunk of a white Toyota sedan struck by the drone’s Hellfire missile were probably water bottles, and a secondary explosion in the courtyard in a densely populated Kabul neighborhood where the attack took place was probably a propane or gas tank, officials said.

Gen. Kenneth F. McKenzie Jr., the head of U.S. Central Command who is testifying before lawmakers on Tuesday, took full responsibility for the botched strike and appeared virtually on Sept. 17 at a Pentagon news conference.

“I offer my profound condolences to the family and friends of those who were killed,” he said. He added that the Pentagon was exploring giving so-called ex gratia payments to the victims’ families.

Defense Secretary Lloyd J. Austin III ordered a review of the military’s inquiry into the drone strike to determine, among other issues, who should be held accountable and “the degree to which strike authorities, procedures and processes need to be altered in the future.”

Congressional lawmakers, meanwhile, said they wanted their own accounting from the Pentagon, and both Mr. Austin and General McKenzie are sure to face questions and criticism from lawmakers on Tuesday.

Senior Defense Department leaders conceded that the driver of the car, Zemari Ahmadi, a longtime worker for a U.S. aid group, had nothing to do with the Islamic State, contrary to what military officials had previously asserted. Mr. Ahmadi’s only possible connection to the terrorist group appeared to be a fleeting and innocuous interaction with people in what the military believed was an ISIS safe house in Kabul, an initial link that led military analysts to make one mistaken judgment after another while tracking Mr. Ahmadi’s movements in the sedan for the next eight hours. A Visual Investigation published by The New York Times on Tuesday found that the house in question was in fact an Afghan family home.

The general said the strike was carried out “in the profound belief” that ISIS was about to attack Kabul’s airport, as the organization had done three days earlier, killing more than 140 people, including 13 American service members.

Gen. Kenneth F. McKenzie, Jr., the head of the military’s Central Command, which oversees Afghanistan, apologized on Sept. 17 for a botched drone strike that killed 10 civilians in Kabul.

As he admitted the mistake, he said that the military’s target had stopped at an ISIS “safe house” hours before the attack.

But a new Visual Investigation by The Times found that the house in question was in fact an Afghan family home.

Gen. Mark A. Milley, the chairman of the Joint Chiefs of Staff, called his Chinese counterpart in the final months of the Trump administration to reassure him that Donald J. Trump had no plans to attack China and that the United States was not collapsing, according to “Peril,” a recently released book by the Washington Post reporters Bob Woodward and Robert Costa.

“Things may look unsteady,” the chairman, Gen. Mark A. Milley, told Gen. Li Zuocheng of China on Jan. 8, two days after Mr. Trump’s supporters stormed the Capitol. “But that’s the nature of democracy, General Li. We are 100 percent steady. Everything’s fine. But democracy can be sloppy sometimes.”

Yet despite his assurances, General Milley was so concerned about Mr. Trump that later that day he convened a meeting with top commanders to remind them that the procedures for launching a nuclear weapon called for his involvement in such a decision.

In the days leading up to the 2020 election, the book reveals, American intelligence showed that the Chinese believed that Mr. Trump planned to launch a military strike to create an international crisis that he could claim to solve as a last-ditch effort to beat Joseph R. Biden Jr.

General Milley, who had become increasingly concerned about the potential for one misread move to set off combat between the world superpowers, first called General Li around that time on a secret backchannel. He wanted to assure General Li and President Xi Jinping that the United States was not planning to attack China.

On the Jan. 8 call, General Li suggested that Chinese leaders feared that the United States government was unstable. He pressed General Milley over the course of an hour and a half about whether the military was going to take action.

General Li feared that Mr. Trump might be trying to find a moment that he could seize on to remain in power, similar to Hitler’s exploitation in 1933 of an arson fire at the German Reichstag to help institute emergency powers, the book said.

Some Republicans have expressed anger about General Milley’s calls to China, but President Biden said earlier this month that he had “great confidence” in him.

Two days after a mob of Trump supporters stormed the Capitol, Gen. Mark A. Milley spoke to Speaker Nancy Pelosi, who was growing increasingly concerned Mr. Trump would lash out and use military force.

Their conversation was detailed in “Peril,” a recently released book by the Washington Post reporters Bob Woodward and Robert Costa.

“This is bad, but who knows what he might do?” Ms. Pelosi said. “He’s crazy. You know he’s crazy. He’s been crazy for a long time. So don’t say you don’t know what his state of mind is.”

“Madam Speaker,” General Milley said, “I agree with you on everything.”

General Milley, who as the president’s top military adviser is not in the chain of command, tried to reassure Ms. Pelosi that he could stop Mr. Trump.

He offered similar assurances to his Chinese counterpart that day. And after speaking to Ms. Pelosi, he convened a meeting in a war room at the Pentagon with the military’s top commanders, telling them that he wanted to go over the longstanding procedures for launching a nuclear weapon. The general reminded the commanders that only the president could order such a strike and that General Milley needed to be directly involved.

“The strict procedures are explicitly designed to avoid inadvertent mistakes or accident or nefarious, unintentional, illegal, immoral, unethical launching of the world’s most dangerous weapons,” he said.

Then, he went around the room and asked each officer to confirm that they understood what he was saying.

Nearly a month after the last American troops departed Afghanistan in a hasty evacuation, the Pentagon’s top brass appeared before lawmakers on Tuesday morning to face sharp questions from lawmakers about the military’s role at the end of the nation’s longest war.

Defense Secretary Lloyd J. Austin III and Gen. Mark A. Milley, the chairman of the Joint Chiefs of Staff, are certain to be asked about their advice earlier in the year to President Biden not to withdraw all U.S. troops from the country.

Gen. Kenneth F. McKenzie, Jr., who is also on the witness panel and who is the head of the military’s Central Command, which oversees Afghanistan, offered the same advice to the president.

“We can discuss and debate the decisions, the policies and the turning points since April of this year when the president made clear his intent to end American involvement in this war,” Mr. Austin said in his opening remarks. “And we can debate the decisions over 20 years that led us to this point. But I know that you agree with me that one thing not open to debate is the courage and the compassion of our service members who along with their families served and sacrificed to ensure their homeland would never again be attacked the way it was on 9/11.”

In the first of back-to-back Senate and House hearings this week, General Milley is expected to be asked why he declared a U.S. drone attack in Kabul last month “a righteous strike” even after military officials said they were investigating reports of civilian casualties. The Pentagon acknowledged a week later that the strike was a tragic mistake, killing 10 people, including seven children. General Milley tacitly conceded that he spoke too soon, calling the error “heart-wrenching.”

Tuesday’s hearing before the Senate Armed Services Committee is nominally about the frantic evacuation from Kabul and the Pentagon’s strategy to fight terrorist groups there from long distances. But lawmakers from both parties are expected to use the moment to raise other topics in what is expected to be a rancorous partisan donnybrook.

Republicans are likely to zero in on comments General Milley made to a succession of authors about his efforts during the last chaotic months of the Trump administration to protect the military and American democratic institutions from a president who was searching for avenues to stay in power.

Those moves, as described in a new book, culminated with General Milley twice calling to reassure his Chinese counterpart and extracting promises from the military chain of command not to launch a nuclear weapon on Mr. Trump’s orders without first alerting him.