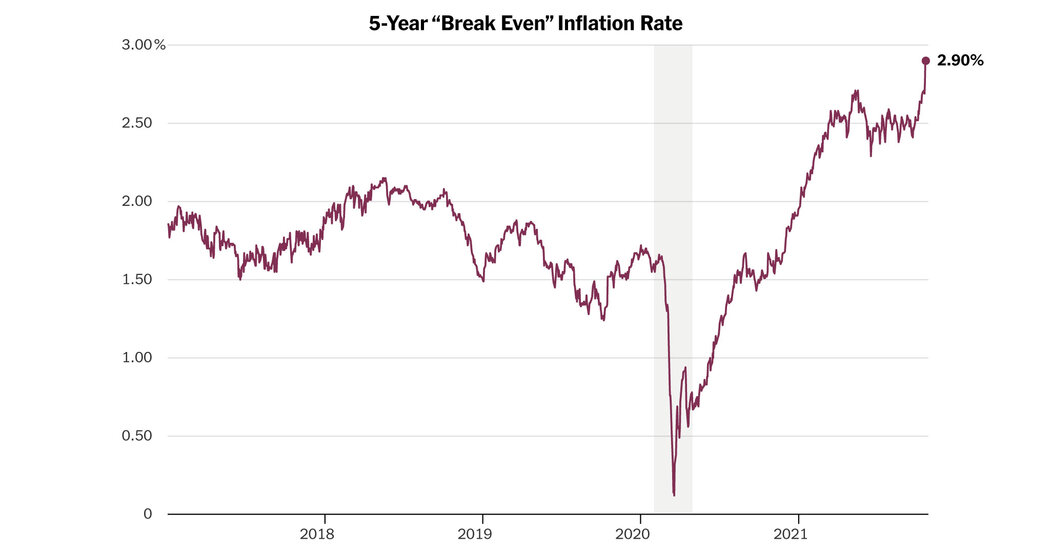 
Almost everyone — buyers of used cars, renters, homeowners with big heating bills and stock market investors — has been fretting about rising prices lately. But despite some of the fastest price increases in decades, investors in the Treasury bond market who are keenly attuned to inflation have been steadfast in their belief that it was a temporary phenomenon.

A key measure of the bond market’s expectations for inflation over the next five years — known as a break even — rose to a new high, briefly topping 3 percent on Friday. That meant investors expected inflation to average about 3 percent a year for the next five years, far higher than any time in the decade before the pandemic hit. Measures of inflation expectations over longer periods, such as over the next 10 years, also rose to multiyear highs.

The expectations of bond investors matter because, historically, officials at the Federal Reserve — who are responsible for managing inflation — watch the signals from the bond market in deciding when to raise interest rates. Higher rates tend to put the brakes on inflation — but they can also ding stock prices and slow hiring.

“They put great stock in inflation expectations,” said Steven Friedman, a senior macroeconomist at the money management firm MacKay Shields, who was once a market analyst at the Federal Reserve Bank of New York. How investors are positioning themselves influences how Fed policymakers think, he said, because, “those who are putting forward their opinions have skin in the game.”

While the Fed chair, Jerome H. Powell, and other central bank officials have spent months saying higher inflation was a “transitory” result of pandemic-driven supply chain problems, there has lately been good reason to believe that price rises could be a more lasting concern. The Consumer Price Index reading for September, released last week, showed prices climbing 5.4 percent from the previous year — and slightly faster than they grew in August.

But analysts say the crucial concern for bond market investors was that prices seemingly unrelated to the pandemic were also beginning to move higher. Foremost among them was monthly rents, which tend to rise for long stretches once they start moving upward. Rents jumped 0.5 percent from August to September, the quickest rise in about 20 years.

“The market saw this as evidence that the pickup in inflation will not be as transitory as the Fed had hoped,” said John Briggs, a bond market strategist at NatWest Markets in Stamford, Conn.

Energy prices also jumped 25 percent last month, driven by sharp increases in gasoline and fuel oil costs. Rising crude oil prices are behind the surge, and there is little sign that those pressures are going away any time soon. Benchmark American crude oil prices continue to push higher, rising 11 percent in October alone and up roughly 70 percent for the year.

And at the same time, Covid-related production snags, such as the stop-and-go recovery of auto manufacturing, continue to keep other prices elevated. Last week, a report on wholesale used car prices, which has become a closely watched indicator of inflation on Wall Street, showed the prices that dealers pay to stock their lots were surging once again. Those prices will filter through to consumers, most likely keeping used car prices high for months.

All those factors have prompted investors to snap up inflation-protected Treasury bonds, whose payments increase to keep pace with inflation, and sell off plain vanilla Treasuries.

The difference between the yields on those two types of bonds is called the break even, and it offers something of a ballpark estimate of what those who invest in the $20-trillion-plus market for Treasury bonds believe will happen to prices.

Their opinion matters a lot. For decades, the Federal Reserve’s decisions about what to do with interest rates and monetary policy have been heavily influenced by the idea that inflation is as much a psychological process as an economic one. Expectations of rising inflation can become a kind of self-fulfilling prophecy, so the Fed has been inclined to raise interest rates or otherwise tighten monetary policy when public opinion anticipates higher prices.

Many analysts expect the Fed to respond similarly this time — although an interest-rate increase wouldn’t be the first step.

Before that could happen, the Fed would end the extraordinary steps it took to cushion the economy from the worst of the pandemic. That process is widely expected to start at the Fed’s meeting next week, when its key monetary policy committee will probably begin reducing bond-buying programs that have been pumping $120 billion into financial markets each month since the pandemic hit. Exactly how quickly the Fed would taper off that program isn’t clear, but investors now seem to be betting it could be eliminated by the middle of next year.

In recent days, the market-based odds of a rate increase at the Fed’s meeting in June 2022 jumped to roughly 60 percent, according to data from CME. It was about 15 percent at the start of the month.

Investors are watching the Fed’s moves closely. The bond-buying programs and low interest rates have been a huge boon to the stock market; the S&P 500 is up more than 100 percent since they began, including about a 22 percent gain this year.

But some on Wall Street think the markets could accept a methodical shift from the Fed on interest rates, especially if it means keeping inflation in check.

“I have a view that as long as you move away from emergency conditions in a deliberate manner, the markets actually will like that and growth can continue,” said Rick Rieder, head of the global allocation investment team at the money management firm BlackRock.