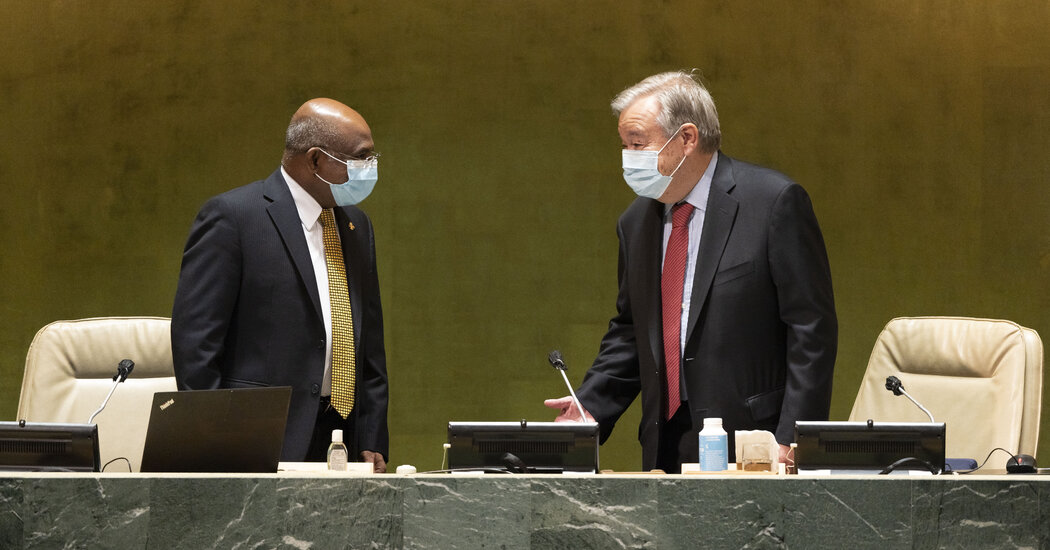 After a day of somber warnings and fiery denunciations that illustrated a world divided, the United Nations General Assembly reconvenes on Wednesday with the Covid-19 pandemic, climate change and fault lines between democracy and authoritarianism expected to dominate a second day of speeches by global leaders.

Among those scheduled to speak were President Nicolas Maduro of Venezuela and President Volodymyr Zelensky of Ukraine. Mr. Zelensky said that he would return to Ukraine immediately after his speech, following an assassination attempt on Wednesday against one of his top advisers. For Mr. Maduro, whose government has been implicated in human rights abuses and economic suffering, the address offers another opportunity to thumb his nose at critics, including the United States.

The chaotic situations in those countries present a stark counterpoint to President Biden’s attempt, in his debut address before the assembly on Tuesday, to cast democratic institutions as “the best way to deliver for all of our people.”

“The future belongs to those who give their people the ability to breathe free, not those who seek to suffocate their people with an iron hand authoritarianism,” he said. “The authoritarians of the world, they seek to proclaim the end of the age of democracy, but they’re wrong.”

Mr. Biden spoke to a smaller than usual audience in the Assembly Hall because of the pandemic. Although he pledged to guide the United States back into a position of global leadership after years of isolationism, Mr. Biden’s calls for international unity against the the expanding influence of autocratic nations — including China and Russia — were opposed by some of his peers who spoke from the podium and virtually.

In a prerecorded speech, President Xi Jinping of China rejected the American portrayal of his government as authoritarian, asserting that democracy is “not a special right reserved to an individual country.” Although his language was restrained, Mr. Xi’s remarks underlined China’s rivalry with the United States, a contentious relationship that the United Nations secretary general, Antonio Guterres, has warned could devolve into a new Cold War.

Mr. Xi also used his address to make the unexpected announcement that his country would stop building new coal-fired power projects overseas. The United States has repeatedly called out China for helping to build electricity plants abroad that are powered by the dirtiest fossil fuel, and Mr. Xi’s announcement — hours after Mr. Biden pledged to double U.S. funding for developing countries’ efforts to tackle the climate crisis — appeared designed to lift his country’s standing in the fight against climate change.

Iran’s new hard-line president, Ebrahim Raisi, delivered an angrier denunciation of the United States, describing American power in the world as both evil and irrelevant. In a prerecorded speech, his first to the world body, Mr. Raisi cast the United States as a scourge that had unsuccessfully sought to use economic sanctions to pressure its foes.

On the eve of a summit that Mr. Biden had called at the White House to speed the delivery of coronavirus vaccines to developing nations, President Rodrigo Duterte of the Philippines railed against the world’s affluent countries, accusing them of hoarding vaccines while the poor “wait for trickles.”

“There is a man-made drought of vaccines ravaging poor countries,” Mr. Duterte said in prerecorded remarks. “Rich countries hoard lifesaving vaccines while poor nations wait for trickles. They now talk of booster shots while developing countries consider half-doses just to get by.”

The disparity, he said, “is shocking beyond belief and must be condemned for what it is — a selfish act that can neither be justified rationally nor morally.”

Brazil’s health minister announced that he had tested positive for the coronavirus on Tuesday in New York, where he was attending the United Nations General Assembly along with the country’s defiantly unvaccinated president, Jair Bolsonaro.

The health minister, Marcelo Queiroga, tweeted that he would quarantine in the United States and was “following all health safety protocols.” Dr. Queiroga, who is a cardiologist, received the CoronaVac vaccine, made by Beijing-based Sinovac, early this year.

Dr. Queiroga had accompanied Mr. Bolsonaro during his visit to New York for the U.N. meeting, and was seen on video shaking hands with Britain’s prime minister, Boris Johnson, when Mr. Johnson met Mr. Bolsonaro on Monday.

Before being diagnosed, Dr. Queiroga participated in meetings in New York with United Nations Secretary General Antonio Guterres and with President Andrzej Duda of Poland.

On Monday night, Dr. Queiroga made headlines in Brazil after he was filmed giving anti-Bolsonaro demonstrators the middle finger as he and other members of the government delegation left a dinner at the residence of the country’s ambassador to the United Nations.

The president’s office said in a statement issued late Tuesday that Dr. Queiroga would remain in the United States while he recovers and said he was “doing well.”

“We also inform that the other members of the delegation tested negative for the virus,” the statement said.

Dr. Queiroga had a busy agenda in New York. He had breakfast with a group of investors; participated in a meeting with Brazil’s first lady, Michelle Bolsonaro; paid tribute at the Sept. 11 memorial; and spoke to senior officials at the World Health Organization.

Dr. Queiroga became Mr. Bolsonaro’s fourth health minister in March. His tenure has been marred by allegations that senior ministry officials sought kickbacks as they negotiated the purchase of Covid-19 vaccines.

Mr. Bolsonaro’s handling of the pandemic in South America’s largest country has been widely criticized. He has repeatedly downplayed the threat the virus posed, and his government was slow to secure access to vaccines even as Covid-19 overwhelmed hospitals and killed more than 590,000 people in Brazil.

On Tuesday, Mr. Bolsonaro used his speech at the General Assembly to defend the use of ineffective drugs to treat the coronavirus and argued that doctors should have had more leeway in administering untested medications for Covid-19. The far-right president added that he had been among those who recovered after “off-label” treatment with a malaria drug that studies have found ineffective to treat the disease.

Mr. Bolsonaro, who had a mild case of Covid-19 in July of last year, has said he was in no hurry to get vaccinated, which made for an awkward exchange during his meeting with Mr. Johnson, who hailed the AstraZeneca vaccine, which was developed in Britain at Oxford University.

“Get AstraZeneca vaccines,” Mr. Johnson said. “I’ve had it twice.”

Mr. Bolsonaro pointed to himself and said: “Not yet.”

His unvaccinated status also created hurdles in New York, where restaurants require that patrons show proof of inoculation for indoor seating. On Sunday, one of Mr. Bolsonaro’s ministers posted a photo on Twitter of the president eating pizza while standing on the street alongside several top aides — including Dr. Queiroga.

President Biden and other world leaders, including António Guterres, the director general of the United Nations, are gathering virtually for a small panel discussion on Wednesday to kick off a global summit, convened by the White House, aimed at forging a global consensus around a plan to fight the coronavirus crisis.

The opening discussion, “Call the World to Account and Vaccinate the World,” will be moderated by Linda Thomas-Greenfield, Mr. Biden’s ambassador to the United Nations. Participants will include other presidents and prime ministers, including President Matamela Cyril Ramaphosa of South Africa and Prime Minister Boris Johnson of the United Kingdom.

White House officials have said that Mr. Biden’s message to the group will be that the United States cannot fight the pandemic, or address the global vaccine shortage, on its own. Earlier Wednesday, Pfizer-BioNTech announced that it had struck a deal with the Biden administration to sell the United States an additional 500 million doses of its coronavirus vaccine, to be donated to nations that need them.

Drug company executives, philanthropists and leaders of nonprofit organizations have also been invited to the summit, which is being convened by Mr. Biden to coincide with the United Nations General Assembly meeting in New York. Administration officials say it is the largest gathering of heads of state to date to address the global pandemic.

Mr. Biden has been under intense pressure from global health experts to do more to address the vaccine shortage. Less than 10 percent of the population of poor nations — and less than 4 percent of the African population — has been fully vaccinated against Covid-19. Covax, the W.H.O.-backed international vaccine initiative, is behind schedule in delivering shots to the low- and middle-income nations that need them the most.

At a briefing held by Physicians for Human Rights earlier this week, Dr. Soumya Swaminathan, the chief scientist of the World Health Organization, sounded a note of urgency and issued a plea for nations to work together to distribute vaccines in a coordinated — and equitable — fashion. She also urged countries to share their excess supplies.

“A country by country approach, a nationalistic approach, is not going to get us out of this pandemic,” she said. “And that’s where we are today.”