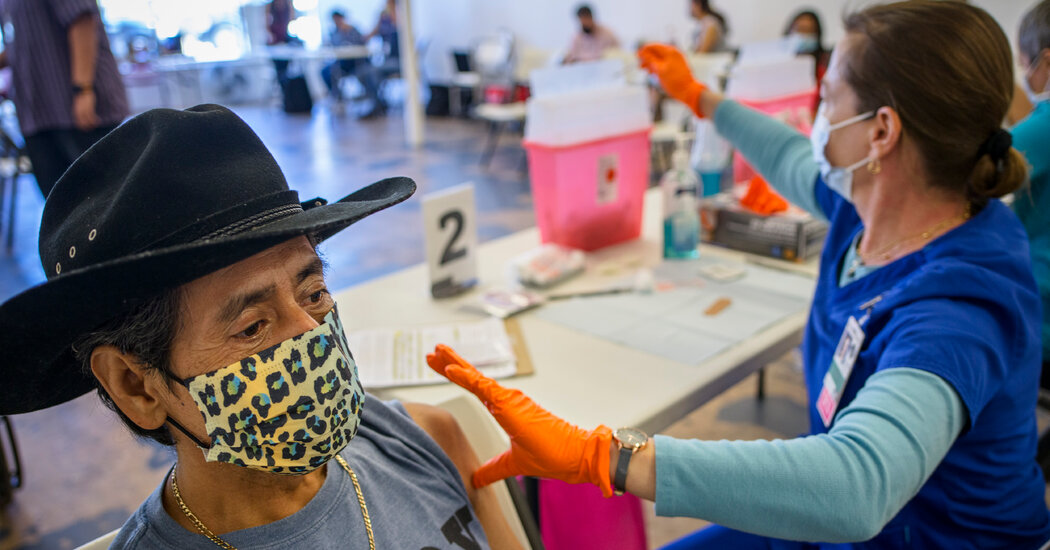 President Biden’s push for large employers to mandate coronavirus vaccinations took another step toward becoming official yesterday: OSHA submitted the initial text of its emergency temporary standard to the Office of Management and Budget. From there, it still needs to go through an interagency review process, which could take weeks. Many companies say they have been waiting for the official OSHA standard to come out before announcing vaccine mandates, despite pressure from the White House to act.

In the meantime, vaccine mandates are facing growing resistance in states whose leaders oppose such requirements and other pandemic restrictions. On Monday, Gov. Greg Abbott of Texas issued an executive order banning private employers from mandating coronavirus vaccines. Yesterday in Florida, the state’s health department fined Leon County, which encompasses Tallahassee, for violating a state ban on “vaccine passports.”

State-level complications come as companies juggle two sets of federal mandates: the rule requiring all federal contractors to be fully vaccinated by Dec. 8 — the text of which has already been released — and the rule requiring all companies with more than 100 workers to be fully vaccinated or submit to weekly testing, which OSHA has now submitted for approval.

Legal experts say that state actions do not override Biden’s order. “Texas has just set itself up for a grand political show, but not a potentially legally sound initiative to stop all vaccine mandates,” James Hodge, the director of the Center for Public Health Law and Policy at Arizona State University, told The Times. That said, for companies wary of vaccine mandates, perhaps because they fear that workers may quit, the Texas order could provide cover to delay an announcement.

Several big companies said they would defy the Texas order, including American Airlines and Southwest Airlines, which are based in the state. Boeing, which has offices in Texas, announced a vaccine mandate yesterday. A spokesperson for Shell, which requires offshore workers in the Gulf of Mexico to be vaccinated by January, told DealBook the company was evaluating the governor’s order.

“The question for any business leader is: What do you want to do to save more lives in your companies?” Jen Psaki, the White House press secretary, said yesterday at a briefing, emphasizing the Biden administration’s message that vaccine mandates are good for business. “Our intention is to implement and continue to work to implement these requirements across the country,” she said, “including in the states where there are attempts to oppose them.”

The U.S. opens its borders to Mexico and Canada. Fully vaccinated travelers will be allowed to cross America’s land borders starting in November. The lifting of the ban, imposed in March 2020, will effectively mark the reopening of the United States to tourism, signaling a new phase in the recovery.

Policymakers nervously watch inflation data. A key reading on consumer prices today is expected to show that inflation remains historically high, a worry for officials at the Fed and the White House.

The global chip shortage takes a bite out of Apple. The tech giant’s production targets for the new iPhone 13 could fall short by as many as 10 million units, according to Bloomberg. Analysts warn that long lead times for semiconductors could persist well into 2022.

A big deal in the world of corporate comms. WPP’s Finsbury Glover Hering is buying Sard Verbinnen, combining two of the most well-known M.&A. and crisis communications firms. The new firm will have roughly 1,000 employees and $330 million in revenue. Employees will own about 40 percent of the group, while Sard’s significant minority investor, Golden Gate Capital, will retain a stake.

William Shatner heads to space. The actor famous for playing Captain Kirk on “Star Trek” will be a passenger on the second flight by Blue Origin, Jeff Bezos’s space tourism company. Shatner, 90, who has also recorded 10 albums, said he planned to release a song about his trip.

As the pandemic’s initial economic shock recedes, many worry that the next stage of the recovery could be messy. This week, both the I.M.F. and Goldman Sachs cut their estimates of this year’s economic growth, with the persistence of the coronavirus and supply chain disruptions weighing on the outlook.

The biggest worry is a recovery-killing bout of stagflation — the toxic mix of rising prices and sluggish growth that bedeviled the U.S. in the second half of the 1970s, The Times’s Matt Phillips reports. Indeed, some of what’s happening today seems like a flashback:

But the market doesn’t appear to be pricing in a 1970s rerun. Stocks have generally traded at lower valuations during times of rising inflation, like in the latter half of the 1970s. Today, the market’s average price-to-earnings ratio is not far off the levels reached at the height of dot-com mania. Keeping that up relies on continued strong earnings growth. Companies like FedEx, Nike, CarMax and Bed Bath & Beyond saw their shares fall in recent weeks after releasing disappointing quarterly reports.

“People are going to be further disappointed,” said Mike Wilson, the chief U.S. equity strategist at Morgan Stanley. “Even if the economy is OK, it may not translate into the kinds of earnings that people are expecting.”

“You see oil majors feeling the heat. But private equity is quietly picking up the dregs, perpetuating operations of the least desirable assets.”

— Alyssa Giachino of the Private Equity Stakeholder Project, a nonprofit behind a new report that shows private equity firms are among the biggest investors in fossil fuels, despite many of the firms trumpeting their sustainable investments.

SoftBank is investing $400 million in the activewear company Vuori, at a valuation of about $4 billion. The move into retail is noteworthy for SoftBank, which is known largely for investing in tech companies. The heady valuation reflects investors’ enthusiasm for direct-to-consumer brands.

What to Know About Covid-19 Booster Shots

The F.D.A. authorized booster shots for a select group of people who received their second doses of the Pfizer-BioNTech vaccine at least six months ago. That group includes: Pfizer recipients who are 65 or older or who live in long-term care facilities; adults who are at high risk of severe Covid-19 because of an underlying medical condition; health care workers and others whose jobs put them at risk. People with weakened immune systems are eligible for a third dose of either Pfizer or Moderna four weeks after the second shot.

The C.D.C. has said the conditions that qualify a person for a booster shot include: hypertension and heart disease; diabetes or obesity; cancer or blood disorders; weakened immune system; chronic lung, kidney or liver disease; dementia and certain disabilities. Pregnant women and current and former smokers are also eligible.

It is not recommended. For now, Pfizer vaccine recipients are advised to get a Pfizer booster shot, and Moderna and Johnson & Johnson recipients should wait until booster doses from those manufacturers are approved.

Yes. The C.D.C. says the Covid vaccine may be administered without regard to the timing of other vaccines, and many pharmacy sites are allowing people to schedule a flu shot at the same time as a booster dose.

The athleisure market got a major boost during the pandemic, as consumers bought comfortable clothes during lockdowns. Vuori competes with some formidable rivals in this market, including Lululemon, Outdoor Voices and Sweaty Betty. “One of the things that sets us apart is authenticity with a male demographic,” said Joe Kudla, Vuori’s founder and C.E.O. The company was founded in 2015 and reached profitability two years later, he said.

Like other consumer start-ups that were born digital, Vuori is now expanding offline: It has nine retail stores, accounting for about 10 percent of sales. Over the next five years, it’s aiming for around 100 stores.

SoftBank’s investment came from a mutual connection. Kudla was introduced to Nagraj Kashyap, a managing partner at SoftBank Investment Advisers, through one of the company’s board members. SoftBank has experience with e-commerce, with investments in companies like Coupang. SoftBank, which invested in the start-up via its Vision Fund 2, saw Vuori as having a “tech mode and a brand mode going forward,” Kashyap said. Vuori is looking to grow in Western Europe and Asia, where Softbank’s connections could help.

Our online lives generate loads of data that companies use to nudge us toward doing things. But a prompt to listen to songs that you might like is different from pushing you to invest in a meme-stock frenzy. When it comes to algorithms and recommendation engines, it’s fair to expect more from a finance app than a music program, the S.E.C. chairman Gary Gensler argued in a speech yesterday.

“When do these design elements and psychological nudges cross the line and become recommendations?” he asked. The answer “might change the nature of the platform’s obligations under the securities laws,” he said, highlighting the tension that finance firms face in harnessing data collected from users. A finance app’s “legal duties may conflict with such platforms’ ability to optimize for their own revenue,” Gensler said.

This isn’t a hypothetical debate. The S.E.C. recently requested comment on the use of new technologies by financial industry firms. In response, the University of Miami School of Law’s Investor Rights Clinic reported “a sharp increase” in clients who suffered losses on digital platforms using gamification, predictive data analytics and behavioral prompts. People “express confusion as to the reason their trusted institution would promote high-risk strategies,” it said.

What does Robinhood think? The trading app with more than 20 million customer accounts noted in its response to the S.E.C. that a majority of its users are new to investing. “We believe that this is unequivocally a good thing,” the company wrote, arguing that its digital features help promote financial literacy and don’t explicitly recommend to buying or selling securities. In March, it removed a controversial digital confetti feature that was criticized for gamifying trading.

Gensler and Robinhood are on the same page, in part. The regulator said new technologies have broadened access to the markets and brought “a lot of good.” But Gensler said that updates to the commission’s rules may be needed to address the nature of digital nudges on trading platforms.

Best of the rest

We’d like your feedback! Please email thoughts and suggestions to dealbook@nytimes.com.